I had to take Edith to the emergency room yesterday and when I returned home there were only 4 hours left to write and publish today’s blog. She is not well, and we don’t know what it is yet. In fact, we’re going to another ER tonight at the advice of the wife of Pyramyd Air’s president (who is a physician). She was surprised that the first hospital never tested Edith for an obvious illness. I will keep you updated as we learn more.

Today I am rerunning an old blog from the past. This one was published on November 11, 2005. Enjoy!

I’ll tell you about my first airgun, then I want YOU to tell me about YOURS!
A Benjamin 107 pistol

My first airgun was a .177 Benjamin model 107 air pistol. Although the Blue Book of Airguns says no Benjamins were ever marked with the 107 model number, I’m pretty sure mine was, because at the age of nine I knew the model number. 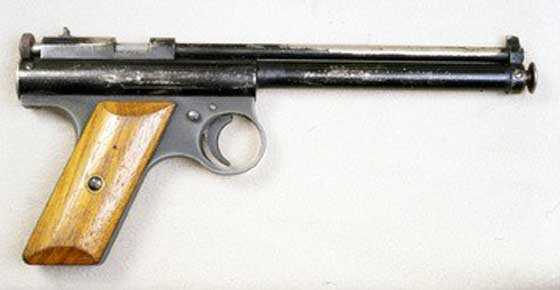 Benjamin 107 was a slim air pistol due to the pump rod extending straight out from the front. This one still has lots of fragile black nickel over silver nickel, which covers the brass.

Benjamin made air rifles before the turn of the 20th century but they started making air pistols in 1935. The 107 was made from 1935 to 1941. It had the name “Benjamin Franklin” in quotes stamped into the left side of the compression tube. The quotes indicated the name was a farce – a play on the name Benjamin Air Rifle Company that was stamped on the end cap along with the model number. It tickles me to see gun dealers advertising that they have a Benjamin Franklin for sale!
A front-pumper
The 107 is a multi-pump pneumatic with a long pump rod coming straight out the front of the pump tube under the barrel. There is no mechanical advantage with this system. Any air that gets crammed into the reservoir has to be compressed by muscle power alone. Since about 1909, Benjamin had been using this system with their rifles. It worked okay for them, but a pistol is not as handy to pump as a rifle. You could pump the first and even the second pumps by hand. After that, help was needed. The mushroom-shaped pump rod end was put against something hard – like a tree – and the gun shoved forward to compress the air. You could get five or six pumps into the gun that way. If the tree was slippery, you could also have an accident that would leave your knuckles barked (pun intended).
Benjamin High-Compression pelletsB
The only .177 pellets I even knew about were in the single Benjamin tin that came with the pistol. Years later, I found other similar tins in sporting goods store and bought them immediately, thinking they might be the last pellets on the planet! This was in the 1950s and information about things like airguns was in short supply 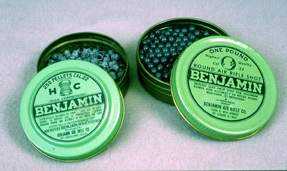 These are Benjamin .22 diabolo pellets and .22 lead balls, but the tin for the .177 pellets is identical. It looks like old-fashioned patent medicine.

Power was low
Even with as many pumps as I could muster, the pistol wasn’t too powerful. I suppose I over-pumped it, thinking it would get faster. All that happened was the onset of valve lock. I’ve never chronographed one of these pistols, but I’d be surprised if they went much faster than 300 f.p.s. with vintage Benjamin pellets.
Accuracy was limited by the pellets
In the 1950s, my pistol could hit a tin can at 25 feet and that was about it. In the 1990s, I tested another 107 with modern pellets, and it grouped about two inches at 33 feet. That’s okay, but it doesn’t compare to a Beeman P1.
Benjamin was stubborn and Crosman carried the day!
The Benjamin Air Rifle Company was always quite conservative. They held off switching to the compound underlever pump linkage until 1938, even though Crosman had demonstrated its superiority back in 1924. The first underlever pump they offered was an attempt to convert the front pump to an underlever through a Rube Goldberg arrangement of levers and linkage points. It was horrible and worked poorly. Their conservatism eventually cost them their company, which Crosman purchased in 1992.

Benjamin’s first underlever pump was a weak attempt to adapt the front pump to an underlever. It did not work well.

Tell me about YOUR first airgun
Using the comment section, please share your first airgun with us. Everyone has a first gun and probably more memories of it than they care to admit. Love it or hate it, it helped make you the person you became.