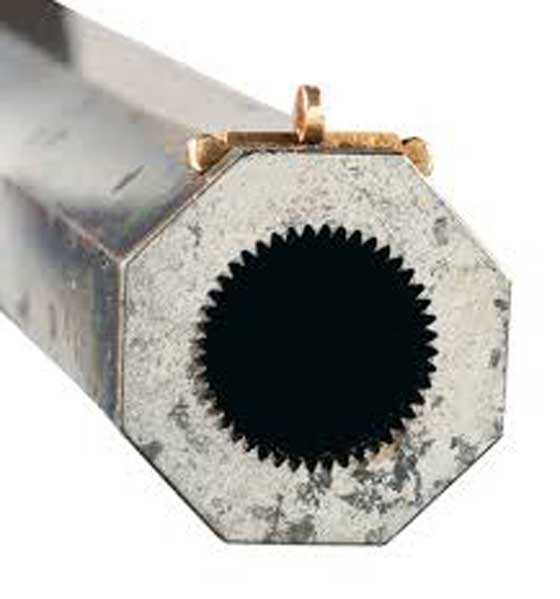 Nobody knows when rifling was invented

I’ve been reading about guns for 56 years and the one subject that has always baffled the experts is rifling. When was it invented? By whom? What gave them the idea? One thing is certain — the Wiki piece on rifling is entirely fabricated. It says “Rifling was invented in Augsberg, Germany, at the end of the 15th century. It would be wonderful if that were true, but the fact is nobody knows where, when or why rifling came into being. To be fair to Wiki, I have read other accounts that claim people in the 1400s were thinking of spinning a ball for stability in flight because they knew the fletches on arrows stabilized them the same way. The truth is, though, no one knows for certain when rifling came into being. It is entirely possible it came from several locations around the same time.

Rifling is a set of parallel raised ridges called lands and grooves that run down the inner bore of a barrel. Today these lands and grooves run in a spiral path relative to the bore’s axis, but that wasn’t always the case. The purpose of the grooves and the lands that stand up between them is to spin the bullet to impart gyroscopic stabilization as it flies through the air. I will talk more about the specifics of that stabilization as this report progresses. 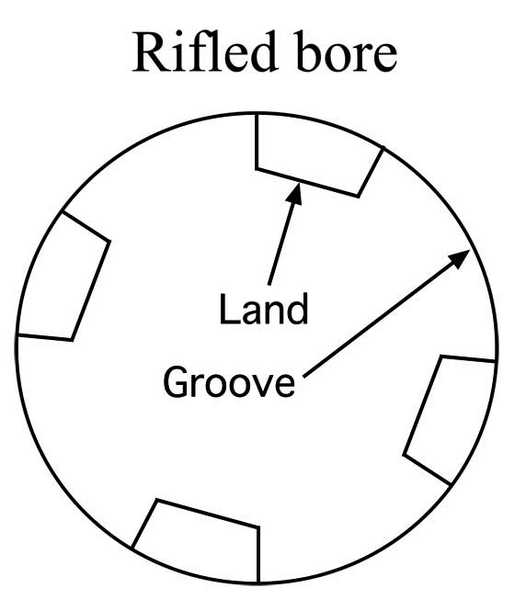 Cross section of a rifled bore.

Back in the 1960s I read somewhere that the first rifling was straight. The lands and grooves ran parallel to the axis of the bore. This was an attempt to keep the bore of a gun clear of deposits, so the gun could be shot longer before cleaning was required.

Gunpowder leaves dirt in the bore

The gunpowder of that era is what we call black powder today. It generates a residue of no less than 55 percent of the solid mass of its initial volume. Some of this is seen in the dense smoke that comes out of the muzzle. The rest of the residue is in the form of deposits that remain in the bore of the gun. A black powder gun can get so dirty that you cannot ram a ball down the bore in as few as 5 shots.

Early shooters compensated by loading smaller balls as the bore clogged up, but that solution wasn’t good. Cleaning black powder deposits from the bore of a gun takes many minutes and requires the use of water. Water left inside the barrel will ruin the next powder charge that gets loaded. So the barrel had to be thoroughly dried between cleanings. A better solution needed to be found.

Straight scratches that run down the inside of the bore were tried, in the hopes that the deposits would collect in them and leave the main bore free for more shots. It must have worked to some extent, because many gun makers started doing it. Then someone had the brilliant idea to cut the scratches in a spiral. That made them longer than the length of the bore, providing more space to hold gunpowder residue. And when they did that it wasn’t long before they noticed a marked improvement in the accuracy of the barrels rifled this way. What I am describing now took many years to unfold. It wasn’t an overnight phenomenon. But it did catch on, and then it began to evolve. Rifling took on many shapes over the next few centuries, as inventors tried every possible thing. The width of the lands and grooves was varied to see what worked best. 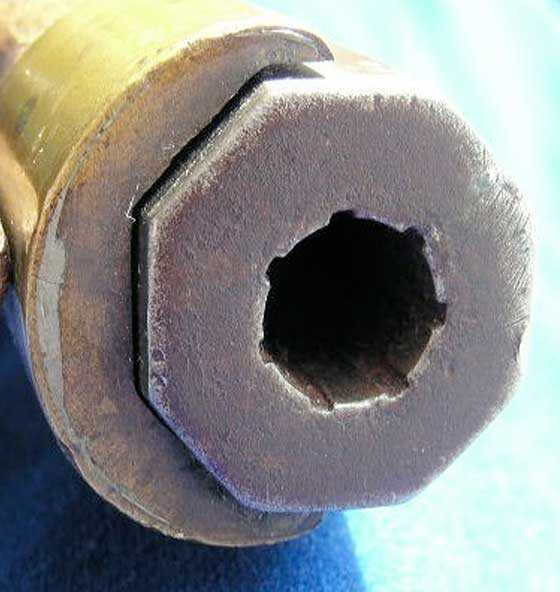 This early Kentucky rifle (1730-1750) had wide lands and narrow grooves that were deep. It didn’t work too well.

As the centuries passed, barrel makers learned that the lands were what spun the ball (all the bullets were still lead balls at this time). Someone (in Prussia ?) discovered that a ball that was inside a tight-fitting thin leather patch would be easier to load, because the ball could be smaller than the bore and the patch would make up the difference.

That idea came to the American colonies within a few short years, where it rapidly evolved into the famous Kentucky rifle that shot a patched bullet — a round ball enclosed in a tight-fitting cloth patch that filled the rifling and spun the ball. The patch cleaned the deposits from the bore both at loading, when it was rammed down the barrel, and again when it was shot.

The Kentucky rifle was a huge advance in firearms because it allowed the use of smaller bullets (balls), because of the tight-fitting patch. A longer barrel allowed the rifle to extract all of the energy that was in the gun powder, so the rifle shot harder than ever. And it was also more accurate. Accuracy, speed, power and economy of powder and lead. These are all the things that the Kentucky rifle brought to the table. And rifling continued to advance.

If it seems odd to call a round ball a bullet, it must also seem odd to call a conical bullet a ball, but that is exactly what the Minie Ball is. Claude Minie and Henri Delvigne came up with a bullet in 1849 that had an iron cup in its base. The bullet was smaller than the rifle’s bore, so it loaded easily, but when the gun fired, the iron cup was driven into the base of the bullet, expanding it to fit the rifling tightly.

Later it was discovered that the bullet would expand if the base was simply left hollow. That simplified its construction. The Minie Ball is one of the earliest successful conical bullets and the hollow base variation of it was widely used during the American Civil War, where it took rifling to the next level. Military leaders learned that conical bullets were far more accurate than plain round balls at long distances. The Civil War has several instances of sniper kills at greater than a half mile distance. These were not with Minie Balls however. 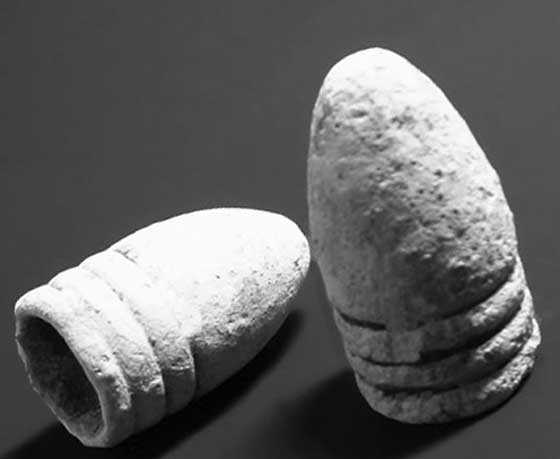 These are not true Minie balls. They are a second-generation bullet that has a hollow base to expand into the rifling. They are fast-loading and keep the bore cleaner than patched balls.

In truth conical bullets were already in use among riflemen before the Minie Ball arrived on the scene, but the success of that projectile helped everyone realize the day of the conical bullet had arrived. After the Civil War the United States military embarked on a program to develop an accurate breechloading rifle that used the new self-contained cartridges. I may have to write a separate report about the development of the U.S. Rifle Model 1873, which is better known as the Trapdoor Springfield. Its development lasted over 8 years and went through several iterations of designs before settling on the final rifle and cartridge. It is the work on the cartridge, however that interests us today.

The 45 Government cartridge that is best known today as the 45-70 came from a scientific investigation of ballistics that the world had never before seen. Individual riflesmiths may well have known everything the government discovered on the 45-70 project, but this time everything was well-documented and the data were made available. The height of the lands and the width of the grooves was taken into special account, as was the rate of twist the rifling took. Things we dismiss as passé today were revealed and discussed in depth for the first time.

This rifling twist rate is a topic I will come back to in a future part of this report. It was a topic of discussion even during the days when the patched ball was being shot, but when the conical bullet came to the market it got extremely important overnight.

Charles Ballard, the inventor of the rifle by the same name, did not necessarily also invent the specific type of rifling that bears his name. The name is more associated with those Ballard rifles that were made during the time the Marlin company owned the Ballard name.

Rifled barrels that have Ballard rifling (low thin lands and relatively wide grooves) are considered the best in guns from 1880-1950. Only special rifling like that by Pope and Schalk are considered superior, and those barrels are always hand-cut. 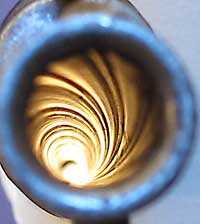 This 1870s Peabody rifle barrel is bored with Ballard rifling. The lands are thin and low and the grooves are wide.

If you research Ballard rifling, don’t get confused. Today, because of the association with the Marlin company, everyone compares it to Marlin’s Microgroove rifling that is even shallower. But Ballard rifling was the shallowest kind of standard rifling in its day.

The timing of the technological advancement in rifling could not have been better, for smokeless powder was about to hit the scene. With it came velocities that were almost double those that black powder gave. Faster bullets meant more kinetic energy, allowing bullets to be made smaller and lighter. Calibers were decreased and the distances rifles shot accurately took a huge leap forward. Rifling had to keep pace with everything.

You must be wondering what all of this discussion has to do with airguns? I have been talking strictly about firearms today. Well, airguns have taken many of their design cues from firearms, and rifling is among those areas in which they have been influenced in a major way. I will begin the discussion of airgun rifling in the very next part of this report, though there is still some way to go with firearms.

64 thoughts on “The invention of rifling: Part 1”