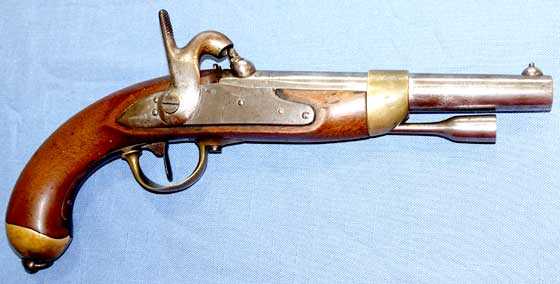 If you think interchangeable parts came from Eli Whitney, the way the U.S. history books tell us, you are mistaken. He did perform a demonstration in 1801, assembling one of his muskets from a seemingly random pile of parts — something that had never been done before. He did it, but he cheated. The parts in the pile were marked beforehand to assure they all went together. So — the idea of interchangeable parts may have come from Whitney, but the first practical application of the idea on a mass scale came 50 years later when Samuel Colt created the modern production line. He may have been inspired by Frenchman, Honore LeBlanc, who suggested that firearms ought to be made from standardized parts, but never went beyond the talking stage. Colt invented the production line that required complete interchangeability of parts to succeed.

This French model 1822 percussion pistol was made in 1826. Although there are hundreds of 1822 pistols that look just like it, their parts do not interchange. The parts of each pistol are fitted by hand.

In fact there is a whole lot more. In the early 1800s when Whitney was active, people talked about “good steel.” In the 1850s when Colt started producing hundreds of thousands of identical items that were comprised of millions of parts, they had to have a more refined knowledge of the metallurgy involved. “Good steel” wasn’t enough to keep the factories running. Before too many more years passed the steel alloys became standardized to the point that engineers could rely on repeatable performance from parts that were made to a specification. Engineering handbooks were written. Schools were able to teach new engineers how to calculate the performance of an item before it was made, and that knowledge rippled over into manufacturing. By the end of the 19th century, the production world had a good handle on interchangeable parts. Or did they?

The term final finishing is the enemy of controlled costs. Once an item has been made it still may require more work before it achieves the final goal. People who have never worked in production jobs imagine that finished parts roll off the line, one after another, ready to be used. For some parts there can be a whole list of additional steps that are needed before they are ready for the market. And, would you believe that some things simply cannot be made at all?

A gun maker who could not make a gun

As recently as World War II there was a firearms manufacturer who was unable to produce a single gun for the U.S. military that could meet specifications. The manufacturer was Irwin Pederson — the same gun maker who in World War I designed a way to turn a 1903 Springfield bolt action rifle into a semiautomatic assault rifle 20 years before Hitler’s engineers delevoped the Sturmgewehr.

The top-secret Pederson Device arrived in Europe too late for the war and was never issued. The devices were destroyed after the war and their classification kept them from public knowledge for several more decades. Pederson was a respected gun maker. But this same Pederson failed to produce even one M1 Carbine that could pass government acceptance testing.

Pederson’s failure was due to an outdated method of production. The factory moved carbine receivers from one manufacturing fixture to another as they performed the dozens of steps needed to complete the part. They used fixture pins to position the receiver in each different fixture, and these pins needed a small tolerance in order to fit into their aligning holes. This small tolerance caused a cumulative error in tolerances to creep into the part as it was made — condemning every receiver they produced.

Their contract was finally terminated and General Motors, who was already the largest producer of the Carbine, took over the plant and the guns and parts that were in-process. They finished the few thousand Pederson Carbines that were in a near-finished state before they started stamping their own Saginaw Steering Gear division name on the guns.

I could go on and tell other stories about things that couldn’t be produced. Harley Davidson has a history rich with anecdotes on how not to run a manufacturing operation. But they finally learned their lessons and managed to survive and even thrive in the modern production world, so there is a happy ending to that story.

Motorola almost went out of business because they couldn’t get out of their own corporate way to make anything. They went from being a premier producer of television sets to a company that couldn’t compete in pocket pagers in only a couple decades. They had to reinvent themselves to stay in the game, and in the process gave the world the Six Sigma program.

People ask what this has to do with airguns. Only everything. For starters, airguns are not made in the same quantities as M1 Carbines. Six million Carbines were made by 10 different prime contractors in just 38 months. Few airgun models have ever reached that production number, and those few that did took decades to do so. Even today, airguns are low- to moderate-rate production items. So airgun manufacturers have to learn how to build at low rates and still keep the quality up and costs down.

If you’re going to make a few tens of thousands of airguns, you probably buy your barrels from someone else. If you make them in-house, you do so with affordable production processes and machinery — not the latest and greatest.

But if you are Remington Arms and make hundreds of thousands of different firearms each year, you invest in hammer-forging rifling machines that cost three-quarters of a million dollars each, and you have dozens of them. Then — to keep those machines busy and help amortize their ownership costs, you start shopping for barrel-making contracts wherever you can find them.

Specialized parts can hurt you

Let’s say you want to build a spring-piston airgun that’s never been built before. You have made a prototype and it performs better than anything you ever shot. Now you have raised some capital and you want to use it to manufacture your airgun.

Your airgun uses a 27.5mm ID spring tube that allows it to accomplish everything you desire. There’s just one problem. You made the spring tube for your prototype gun from bar stock. That’s too wasteful, expensive and too time-intensive for manufacture. You need to use seamless hydraulic tubing for the spring tubes of the production guns.

Seamless hydraulic tubing doesn’t come in internal diameters of 27.5mm (I’m making this up, so don’t run to McMaster Carr to prove me wrong). You can buy 26.75mm ID tubing and ream it out, but if you do the wall thickness with be too thin. Or you can buy aerospace tubing in 26.75mm ID and ream it because it’s made from better steel and also has thicker walls. But there is a problem. Aerospace tubing costs 4 times as much as standard tubing. If you use it your gun will cost too much to produce.

Instead, you decide to enlarge the powerplant parts and use 28mm ID tubing, which is readily available. However, the minute your new gun comes to market it’s panned by a dozen internet critics who all say it’s too fat. “The rifle he showed me at the Texas airgun show was perfect. Why did he have to go and screw it up?” Until you have worked through a materials sourcing problem like this a dozen times, you will find it difficult to answer that question.

You see — it’s easy to make one of anything. You just work on it until you have it exactly the way you want it and you’re done. Time is no factor.

Making a million of something can also be relatively straightforward, if not exactly easy. As long as you know how. But to make just a thousand or even ten thousand of the same thing — that can be the kiss of death!

Most of us think about production the way it was done back in the 1950s — machines doing just one operation that was straightforward and relatively simple. They did it fast and, when their operators were used to the pace, they could make many parts rapidly — or seemingly so.

Some of us are aware of modern computer controlled machines that do everything at the same time, or in rapid succession. The parts never have to be moved and they transform from raw materials to finished parts before our eyes. But what only a few people realize is — that’s just the beginning. Following the shaping of the part there can be:


Manufacturing is a whole lot more than just time spent on a machine. And, once you appreciate that consider this — some of these other processes require scheduling because they are done somewhere else by somebody else.

Maybe the company that does your anodizing charges you a setup fee for every batch of parts they anodize. So you don’t take them until you have enough parts built up to make the setup charge minimal for each part. Or maybe you can’t plate some parts until they are heat-treated.

One company does your heat-treatment and a different company does the plating. So you have to time your production schedule to dovetail into the schedules of both the other companies. A part that only takes 1 hour and 45 minutes to complete can really take up to 6 weeks because of the scheduling. These are the things that are hidden from public view when we talk about production.

It’s not as easy as it sounds

The making of interchangeable parts has been mastered over the last 165 years, but that doesn’t guarantee that all the parts made today will interchange. Sloppy tolerances, inferior materials, dull tools and poor quality control are just a few of the obstacles to be overcome. Automation has changed how we make things in a major way, but not every company is fully automated. And not every manufacturing process can be done by a machine.

When the production numbers are low there is less capital available to purchase even what automation that does exist. So, the making of airguns and airgun parts is a symphony of mechanization and hand operations, each selected to optimize the business situation and produce a viable product.