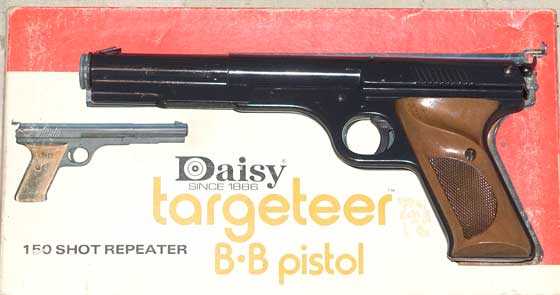 Today I want to share with you a vintage BB gun that was a part of my childhood. Daisy’s model 177 Targeteer BB pistol was produced from 1957 to 1978, so it moved with the company when Daisy relocated from Plymouth, Michigan to Rogers, Arkansas. I didn’t own one as a kid, but my best friend had one that he carried all the time. To say it was underpowered was to compliment its performance. I don’t think he knew about oiling BB guns and you could see the BBs coming out of the muzzle, then dropping rapidly to the ground.

The gun we are looking at today isn’t the first version of the Targeteer Daisy’s first Targeteer was a .118 caliber (.12 caliber, basically) BB pistol that they made from 1937 to 1952 — with time out for the war. I have written about them several times on this blog. The first Targeteer also shot steel BBs, but they were specially made for that gun and were much smaller than the BBs we know today. That shot is now collectible in its own right, so no one shoots it anymore. They shoot number 6 shotgun shot instead.

That first Targeteer was very weak. I’ve never seen one that would break 150 f.ps., and most of them shoot even slower. Of course most people don’t know to oil them, so their guns won’t even launch a BB out of the muzzle today. I think the second gun to be called the Targeteer, the gun we are reviewing today, suffered by association with the first gun.

Daisy started making the second Targeteer in 1957. And this one shot a regular BB. Daisy had learned their lesson about proprietary ammunition — it’s too hard to keep up with! Try to buy a box of Dardick Trounds or some Gyrojet rounds today and see what I mean! Hey — anybody know where I can get some 2.7mm Kolibri?

I reported on the second model Targeteer back in 2005 and again in 2006. Back then I didn’t have much good to say about the pistol because I was remembering my childhood experiences. But last week I pulled the gun out of the closet and decided I needed to do a more thorough report on it. After looking at the Haenel 100 BB pistol we reviewed recently I thought this Daisy pistol deserved the same treatment.

The way I bought this gun is a funny story. Funny to everyone but me, that is. I was attending the Roanoke airgun expo about 15 years ago and they were holding the auction. Airgun dealers would pile all the guns they couldn’t sell on the auction table and show promoter Fred Liady auctioned them off, keeeping half the money. It was one of the ways he paid for the show.

I saw this pistol in the box being held up and it looked like a Crosman 600. I was about 40 feet from the auctioneer whom I could not hear, and I bid $25 for the gun. As soon as I did that a hush fell over the crowd and all eyes turned toward me. That’s never a good sign!

Turns out I had purchased a like-new-in-the-box Daisy Targeteer for $25. I wouldn’t have given $5 for it if I had known what it was, but like I said, I couldn’t see it very well, nor could I hear what was being said. So, for many years I have owned what looks like a brand new Daisy Targeteer 177.

And that is what led to today’s test. It dawned on me when I saw the box for the thousandth time that this gun really has not been broken in. Therefore, It has never been properly oiled. I thought surely Daisy would not make a gun that couldn’t shoot when it was brand new.

I took my own advice and oiled the gun with many drops (10?) of Crosman Pellgunoil. This gun has a modern powerplant with synthetic seals on the plunger (piston) and at the breech of the shot tube. Normally synthetic seals call for far less oil, and you should use silicone chamber oil at that, but this is a weak powerplant, so the use of the petroleum-based Pellgunoil is okay.The extra drops were just penance for all the years the gun was neglected. There is a hole for oil on the top left side of the gun, but I just removed the shot tube and dropped it straight in. It goes straight to work that way and it’s easier to get a large amount in the gun. 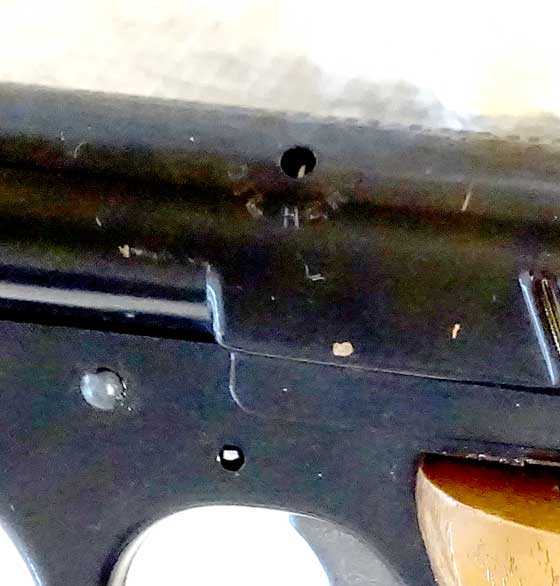 There is an oil hole, but you can also drop oil down the barrel when the shot tube is removed.

Then I shot it at the cardboard target backer on my pellet trap. The BBs didn’t penetrate the tough cardboard, but they did dent it more than I expected. Maybe this gun can do 200 f.p.s. with steel BBs. That’s more than I gave it credit for. It will be interesting to compare it to the Haenel model 100.

The Targeteer 177 is a 150-shot repeating BB pistol that must be cocked for every shot. Cock it by forcing the top of the pistol (the barrel) back against the bottom grip frame. Ideally you would pull the top back like the slide of a semiautomatic pistol, but nobody can do that. It’s too hard! Everyone will just hold the pistol in one hand and push in on the muzzle with the other — keeping the pistol oriented with its muzzle up, because it uses gravity to feed. We encounter the same cocking situation with vintage Quackenbush pellet guns and Crosman M1 Carbines. 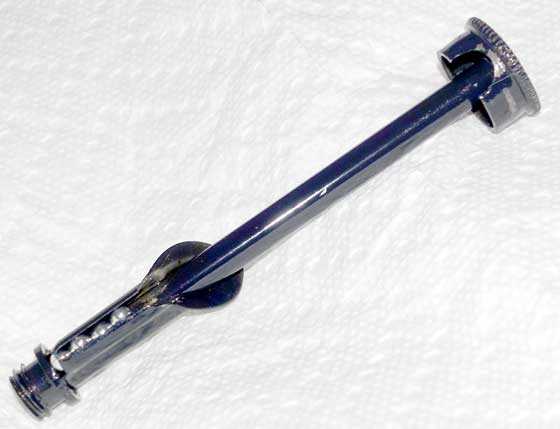 The shot tube is conventional. It’s just shorter than the ones found in the rifles.

The gun I’m testing is made of folded metal and painted with a gloss black paint. The older ones from Plymouth were blued steel, and of course they are worth more. The grips are medium brown plastic and checkered on both sides. A thumbrest on the left panel makes them target grips, after a fashion.

Being made the way it is, the gun is light — only 16.5 oz. It’s the size of a conventional semiautomatic pistol like a High Standard or Colt Woodsman, but the grip is thinner. It fits small-to-medium-sized hands best.

The trigger is a very thin blade of stamped metal. It’s single-stage and breaks at 3 lbs. 14 oz., but the thin blade makes it feel like more. 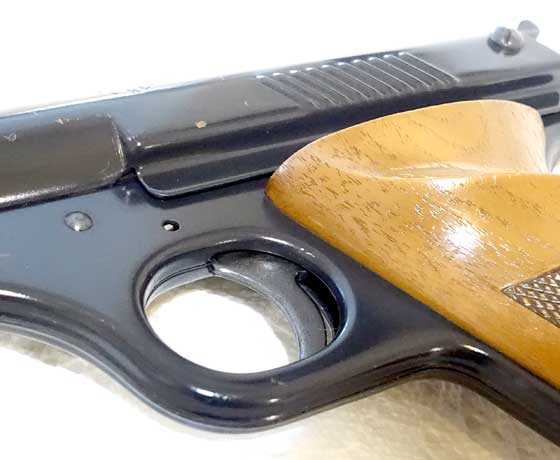 The trigger blade is thin.

The rear sight adjusts in both directions with a simple jam screw and oval slot arrangement on both the vertical and horizontal parts. While it’s not very precise, I expect the accuracy of the pistol doesn’t warrant much more. 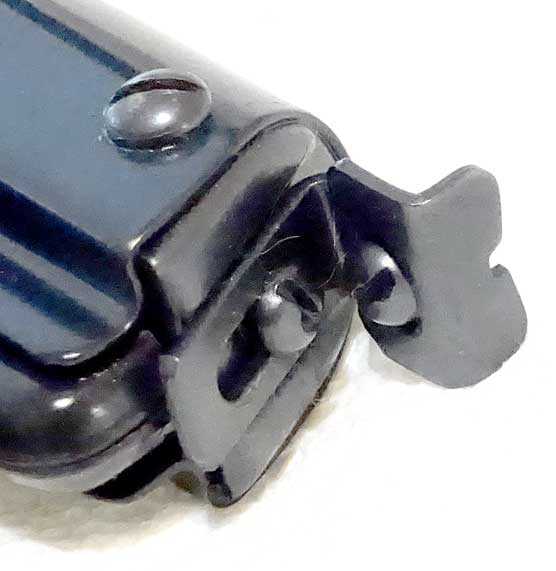 Rear sight adjusts in both directions.

I always wondered what a gun like this is good for. It’s too hard for younger kids to cock, so it isn’t a junior target pistol. It certainly isn’t powerful, so it can’t be used by hunters. I guess the number one purpose for a gun like this is plinking. If it has the power and accuracy needed to bounce an aluminum soda can around the yard, I guess that would be its reason to exist.
I will test it for velocity and accuracy next, and I will stick to my normal tests that we are used to. And, if the gun shows any promise, I might take it out to the yard and bounce a can or two around. As always, you’ll get my full report.