There was a time when I felt reporting on a breakbarrel spring piston airgun was downright boring — I did so many of them. But in case you haven’t noticed, it’s been a long time since I looked at a breakbarrel. I chose the Hatsan 85 Mossy Oak Break Up (that’s the MOBU) Sniper Combo. I chose it because it is what today would be defined as a medium-powered spring rifle. At a velocity of 1,000 f.p.s. in the .177 caliber I’m testing, this rifle isn’t over-powered. I am hoping to get smooth performance and some accuracy by not pushing the velocity to the max. This model is also available in .22 and .25 calibers for the hunters.

Now, the combo does come with a bipod, which on a breakbarrel spring rifle is about as handy as a crutch in a marathon. I will try it for the diehards who just have to see what it does, but I don’t hold out a lot of hope. Expecting accuracy from a spring rifle on a bipod is like juggling jars of nitroglycern — not a recommended practice. Can you say Anti-Artillery Hold? But it’s there so I will try it. I have been wrong enough in the past to know better by now. 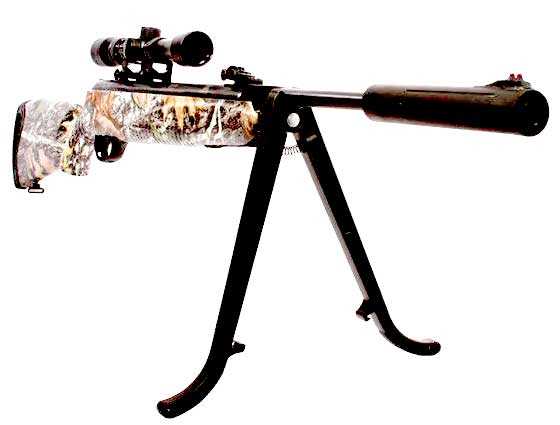 The bipod clamps onto the barrel after the rifle is cocked.

And here we go! The Hatsan 85 is a spring piston breakbarrel air rifle with a conventional coiled steel mainspring. The cocking effort is reported to be — well, it isn’t listed but I will guess it’s something north of 35 lbs. I know it’s a bit stout.

You grab the large silencer (yes, it does have baffled chambers) to cock the rifle. The barrel swings down and quietly compresses the mainspring, then on the return arc you discover that the pivot joint is really tight. That’s a good thing for accuracy and you can bet that it will break in. And better news — the joint is held by a locking pivot bolt! So you can always adjust the tension.

The silencer that Hatsan calls a moderator is baffled.

The recoil pad is thick and sculpted and is part of the reason the recoil isn’t felt that much. The Hatsan shock absorber system (SAS) removes most of the vibration from the rifle when it fires. I have only fired a couple test shots so far but I can attest that the action feels smooth and quick — no lingering vibration. All you really feel when the rifle fires is a forward recoil pulse.

The recoil pad is thick and sculpted to the shoulder. 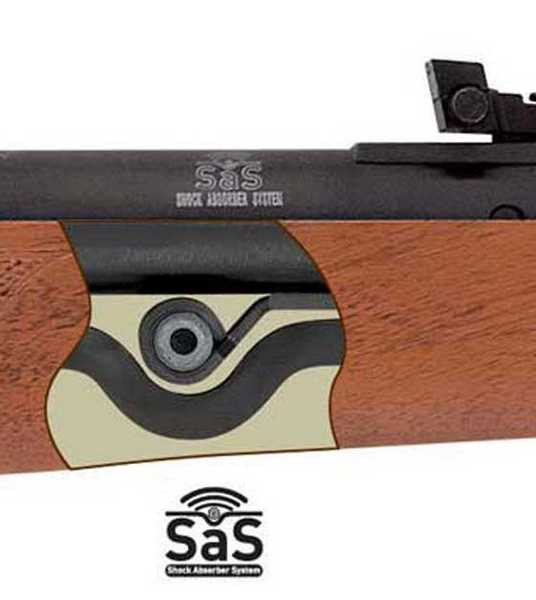 Sling swivels come mounted on the rifle right out of the box. The rear swivel is under the butt in the conventional location, but the front swivel is located where the left stock screw goes. There is a sling packed with the rifle, so everything is ready to go when you get it.

The stock is a hollow synthetic with a Mossy Oak Break Up camouflage pattern on the outside. The pull is 13 inches, which is on the short side, but it doesn’t feel that bad.

The open sights are fully adjustable (yea!) and are also Truglo fiber optic (boo!). But the fiber rods are dark and I think you can use them as conventional sights for greater aiming precision. The sight picture looks pretty sharp, just holding the rifle to my shoulder.

This is a combo, so yes, there is a scope. It’s a 3-9X32 that looks pretty clear, and it comes with the rings already attached. I will mount and test it for you.

I also have a new Leapers 11mm to Weaver adaptor that I plan to test for you on this rifle. So I’m getting a lot of mileage from this test!

The rifle holds well. It feels compact, which I like in a breakbarrel, and the forearm is not too fat. The weight is definitely forward, so the rifle should be very stead with the artillery hold.

The trigger is Hatsan’s Quattro that is fully adjustable. In the past I haven’t liked the Quattro that much on a spring gun, but on this test rifle it feels crisp and positive. The blade is very curved and located close to the back of the triggerguard so your finger doesn’t have too much of a reach. 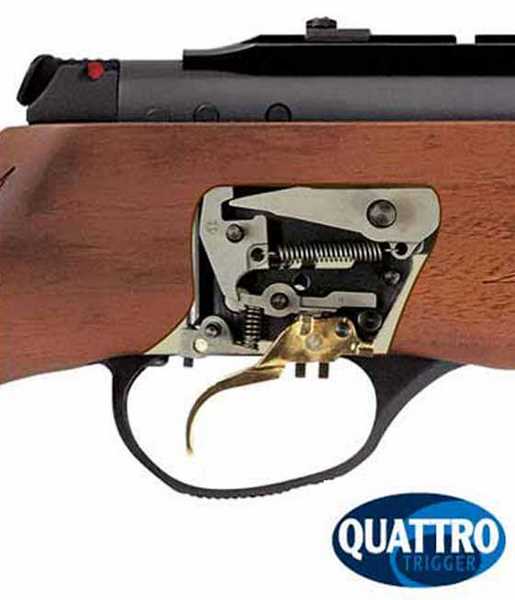 Quattro trigger is very adjustable and feels great in the test rifle!

I am looking forward to testing this air rifle — just to get back in that familiar old groove. I guess I missed it!

The website is now live for the 2016 Texas airgun show. Download the brochure for detailed show information.

Tables are going very fast, so if you want one, reserve it now! Because this show is being held in the center of the Dallas/Fort Worth Metroplex, I think it is going to break all previous attendance records. The hotel and the club are both very easy to get to on freeways most of the way, so don’t worry about traffic.