Today is July 4th, the day the U.S. A. celebrates its independence. I hope readers overseas will forgive my shorter report.

It may be short but this subject is important. Using the correct terms for airguns and firearms ensures good communication of ideas between people, while sloppy terminology promotes mistakes. You can check me out on most of this by looking at the auction website, Gun Broker.

What is a rifle?

A rifle is a long gun that has a rifled barrel, but to many people all long guns are rifles. They either think it doesn’t mattert or they actually don’t know there is a difference between a rifle and a gun. When this gets them in trouble is when they list a “rifle” for sale that actually has no rifling. I see this a lot on Gun Broker in the muzzle loading section. People don’t discriminate between true rifles and smoothbore guns that are most appropriately called fowlers — which are precursors to shotguns.

When it gets REALLY confusing is when the item in question is actually a smooth rifle — a smoothbore gun made with rifle sights and (usually) double set triggers. Smooth rifles are a very specialized class of smoothbore gun that have accuracy competitions within their narrow class of firearm! Now, tell me all long guns are rifles!

While researching the Teach me to shoot blog series, I ran into many percussion guns listed as flintlocks. Some of them had started out as flintlocks and been converted to percussion, but a fair number of them had always been percussion guns (guns that use an explosive percussion cap to ignite the charge of black powder, rather than a flint rock striking a piece of hardened steel). Several of these dealers admitted they were just antique dealers and were selling these guns are decorations, only, but I bet they would have a fit if I described a pressed-glass goblet as cut crystal! Or, if I put a crystal price on the pressed glass, they way they put a flintlock price on the percussion gun. You see, when you are loose with words, it’s easy to deceive.

Manufactures are as guilty of this misuse as private individuals. Slapping the title Target Rifle on a product doesn’t make it more accurate. Nor do adjustable sights. These makers don’t care about accuracy. They are hoping novice shooters will be drawn to the title and buy the AR-15, thinking is must be accurate. The heavy barrel it sports doesn’t make it more accurate, either, unless certain things have been done — things that will cost the buyer hundreds more dollars, if they ever hope to compete with the gun. This is open deception at work!

Think that refers to a Daisy 853? Think again. Some non-shooting person in the marketing department used that term to describe the breakbarrel rifle they were trying to promote. Ain’t no pumping involved with this one! It may sound harmless to the marketing people, but a lot of customers will start wondering what this thing really is. Is it a pneumatic or a springer? It makes a difference.

What? You mean a kitchen match? Because that’s what it feels like to pull your 5-pound creepy trigger — like breaking a wooden matchstick!

Okay, I see the big hole in your buttstock. Is that what you are calling a thumbhole stock? Because it isn’t. A thumbhole stock fits the hand like a glove. There is a small hole for JUST the thumb to fit through, and it is angled and contoured to feel just right — not something that looks like several boards were nailed together to meet the legislative requirements of countries where an import points system drives the design of airguns!

The term semiautomatic refers to how the hammer or striker is cocked. If it is cocked by the action of the gun when it fires, it is semiautomatic — and fully automatic means it both cocks and continues to fire as long as the trigger remains depressed.

When the action of the trigger advances a cylinder loaded with pellets, so that the next pellet aligns with the barrel, it is a revolver. It doesn’t matter that it looks like a semiautomatic pistol on the outside. The trigger pull will be long and hard because of all the work it has to do (turn the cylinder and cock the striker or hammer).

That’s fine, but it’s incomplete. Is it 11 dovetail or is it Picatinney? “Come on, B.B., everyone know that dovetail refers to 11mm grooves!” Yes, I am sorry to say, they probably do. I have lost that battle. But what about …

When I was a kid, everybody knew what a BB gun was. It shot a steel sphere called a BB, whose history was traced back to actual BB-sized lead birdshot. In 2016, though, the Asian makers of airsoft guns have been calling their 6 mm spherical plastic ammunition “BB Bullets” just long enough to confuse everyone. So when mom shops for a BB gun at the discount store for his son, she buys a Red Ryder and a bottle of 0.20-gram airsoft ammo. For those who don’t see the disconnect (thanks to the mis-labeling of airsoft ammo) those two are not compatible. Don’t expect the 22-year-old salesperson to help you. She’s just as confused as you are! In fact, unless this is brought to their attention, neither party will be aware this is even a problem.

It’s getting worse. Every year I see more and more mistakes being made because of misused terms, sloppy use of words and product disinformation. It is to the point that to explain the problem I often have to give a short class on what the terms really mean (and even why they mean that, for some people). Like what is the difference between a single-stage trigger and a single-action trigger?

This week I will start my review of the new Beeman Dual air rifle that Pyramyd Air has had to rename the Beeman Double Barrel air rifle, to keep from confusing its customers. This product says it is a Beeman Dual right on the box, but Pyramyd Air dares not use that name or they will confuse their customers who will think it is one of the Beeman Dual Caliber air rifles that come with dual caliber interchangeable barrels! 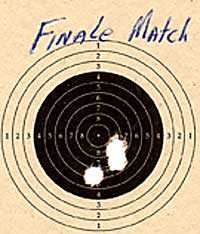