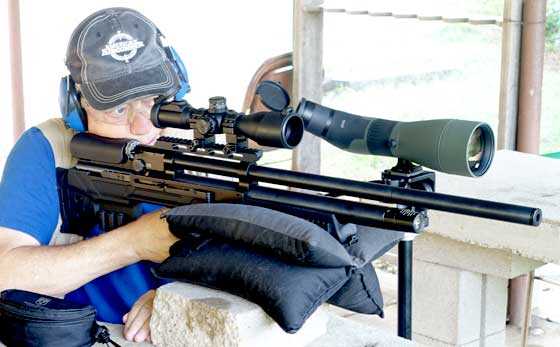 Today we look at the accuracy of the Hatsan Gladius long at 50 yards. I’m taking some time with this rifle for a couple important reasons. First — I think it deserves the extra attention because of the features it offers. And second — because the Gladius is so similar to other Hatsan PCP platforms, readers can use the report for many different models.

The Hatsan Gladius rifle was easy to shoot from 50 yards.

The day was perfect. No breeze to disturb the flight of the .177 caliber pellets. I loaded the rifle with 10 H&N Baracuda Match pellets with 4.50mm heads and started the test. I left the power setting on 3, where it was at the end of the 25-yard test. I wanted to see how much difference there would be at 50 yards, and I was surprised.

The center of the 1.148-inch group is in line with where it was at 25 yards and less than one inch lower. I expected it to drop by 2 inches or more. Apparently power setting 3 is a good spot on this Gladius. 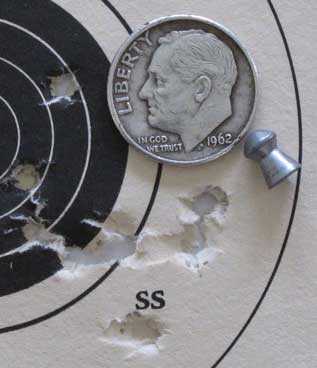 Ten H&N Baracuda Match pellets with 4.50mm heads went into 1.148-inches at 50 yards. The point of impact is less than an inch below where it was at 25 yards on the same power and same scope setting.

I left the scope where it was and turned the power up to 6, which is as high as it will go. That sends this pellet out of the muzzle at 1138 f.p.s. That is supersonic, but as we learned in the 11-part Pellet velocity versus accuracy test , velocity does not affect pellet accuracy negatively. We also learned in our velocity test that the Gladius moves immediately to a new velocity setting, so there is no need to fire a warmup shot.

Nine Baracudas at this power grouped in 1.063-inches at 50 yards. It’s the smallest group of the session but it’s not enough different from the group on power setting 3 to be significant. The point of impact was higher and to the left. Though the group appears at the bottom of a bullseye, I was aiming at the bull beneath where the pellets hit. The first pellet actually went above the target paper and was lost, which is why I used the bull below as the aim point, and also why this is a 9-shot group and not 10. 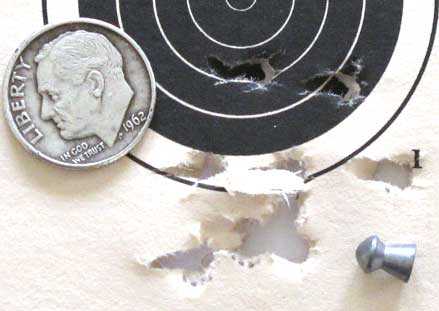 On power setting 6, nine H&N Baracuda Match pellets with 4.50mm heads went into 1.063-inches at 50 yards. The point of impact is about 2 inches above the point of aim on this setting.

Following this target I adjusted the scope 2 clicks to the left. I left the elevation where it was.

At this point 20 shots had been fired on a fill — 10 at power setting 3 and 10 at power 6. I now shot one additional target with Baracuda Match pellets on power setting 4, to see how the gun performed on the third group of 10 shots after a fill.

Since power 3 and 4 are so close, I decided to aim directly at a bull and see where the pellets went. They did go higher on the bull, but this group is strung out vertically just a little. It’s 10 shots in 1.452-inches between centers. You could still hit game at 50 yards on this setting, but afterward it’s probably time to refill. 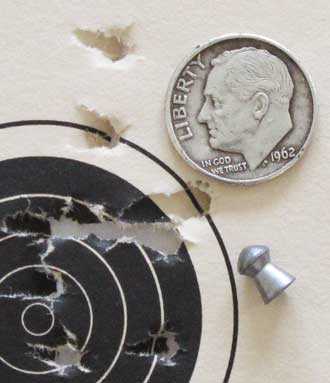 On power setting 4 ten H&N Baracuda Match pellets with 4.50mm heads went into 1.452-inches at 50 yards. This group is higher than the one on power setting 3. The pellets are beginning to string vertically.

Now I switched to the H&N Sniper Magnum pellets and cranked the power up to 6. This pellet weighs 15 grains, which is very heavy for a .177. They were ambiguous at 25 yards, and I wanted to see what they would do at 50. As heavy as they are, this would be an ideal hunting pellet for the Gladius if it is accurate.

Ten Sniper Magnums went into 1.696-inches at 50 yards. They impacted both high and to the left of the aim point. I might try them one more time, but if this is the best they can do they are not well-suited to the Gladius, in my opinion. This was the worst group of the test. Maybe I will try them on a lower power setting next time. 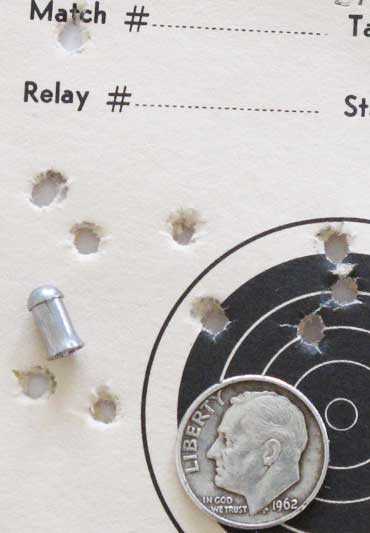 Somebody suggested I try Crosman Premier 10.5 grain pellets, so they were next. The scope was not adjusted from where it had been for the Sniper Magnums. The power was set at 5 — the first and only time in this test at that setting. Ten Premier pellets landed in a 1.56-inch group that was just slightly lower and more to the right than the Sniper Magnums. While this isn’t bad, in light of what the Baracuda Match pellets can do, it isn’t in the running. 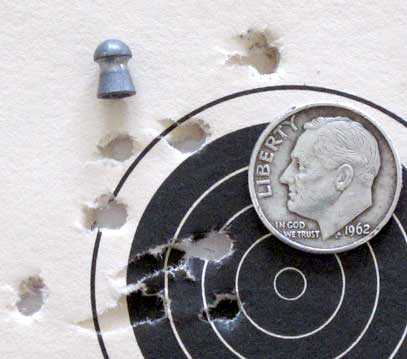 On power setting 5, ten Crosman Premier 10.5-grain pellets went into 1.56-inches at 50 yards. I’m using the same scope setting as I did for the Sniper Magnums.

I had now fired 50 shots and was starting to tire, but I wanted to return to the initial power setting of 3 and see if the results with Baracuda Match pellets were the same. This time I put 10 into 1.31-inches. That is larger than the first group, but not by much. The Gladiuis seems very consistent with all pellets. 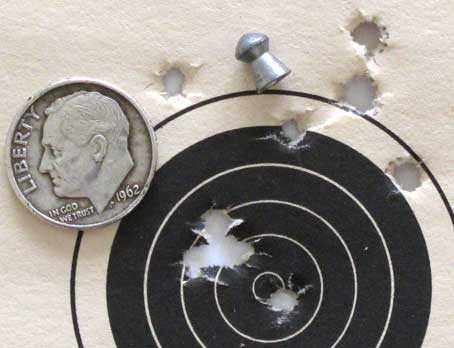 Back on power setting 3, ten Baracuda Match pellets went into 1.31-inches at 50 yards.

One of our readers said he felt his Gladius had a trigger that was slightly heavier and creepier than a Benjamin Marauder trigger, even when adjusted as nice as it can be. I would have to agree with that. So far I have seen accuracy that is very good, but not quite as good as a Marauder. But I didn’t try the 10.34-grain JSB Exact Heavy yet, so there is more to test.

Out on the range I was very pleased by how quiet the rifle is. Even on the highest setting, it’s quiet.

I do like the ergonomics of the rifle. Everything is right where I want it to be. That seems strange to say about a bullpup design, but this rifle is really well laid-out.

I’m also pleased with the number of powerful shots that can be gotten from a fill. If there is a separation between the Gladius and the Marauder other than the triggers and the price, it is the power and management of air.

I see at least one more test for this rifle before we are finished.