Today’s report should get a rise out of you! We are starting our look at the TexanSS from AirForce Airguns. It’s a .45 caliber big bore air rifle with sound suppression (that’s what the SS stands for).

At the SHOT Show I get to listen to hundreds of airgunners and airgun dealers from all around the U.S., and when it comes to big bores here is what they all want — a shorter rifle that’s suppressed, lightweight, runs on 3,000 psi and is extremely powerful. I listen but seldom mention that some of their requests contradict one another.That should come out in this report.

Never has there been a big bore air rifle as successful as the AirForce Texan. When it came out two years ago I tested it and shooters were stunned by accuracy of 1.5 inches at 100 yards, plus the possibility of 500+ foot pounds — all in a 7.5-pound airgun. It was lighter, more powerful and more accurate than anything on the market. It has the ability to be adjusted to the bullet being fired, and I tested it with everything from round balls that weigh 143 grains to 405-grain lead footballs from a .45/70! I got as many as 6 shots from one 3,000 psi fill.

The two things the Texan wasn’t and still isn’t is short and quiet. It takes a long barrel to get the most velocity from compressed air, and no amount of technology can change that. And, when that much air comes out of a muzzle, it wants to make a lot of noise.

The TexanSS changes that. AirForce lopped 8.25 inches off the regular Lothar Walther Texan barrel (from 33-inches to 24.75-inches) and stuffed it into a fat frame extender that’s filled with technology. Yes, folks, I mean baffles! At 8.45 lbs. the rifle weighs just under one pound more than the Texan, and you can thank the suppressor for that. The caliber is .45 and, according to the specs., it develops up to 400 foot pounds of energy.

Is it silent? Of course not! Not even a silenced firearm is completely silent. I will report in detail how loud it sounds after I start shooting it, but I’m told this is a very quiet big bore.

I’m so familiar with rifles from AirForce that I sometimes forget there are those who have never seen one. Here is a quick set of the differences from conventional air rifles. For starters, AirForce guns are primarily made from aluminum. That keeps the weight down. Everything is black, which is their most popular color, though some of their rifles are anodized in blue and red. And they feature Lothar Walther barrels as standard.

Adjustability is a hallmark of AirForce rifles and the TexanSS is no exception. The owner can quickly adjust the impact of the striker to tune the valve to suit the bullet being fired. When bullet weights can range by a difference of over 300 grains, this is an important feature. It keeps you from wasting air, which in a big bore is very key. The result is more shots per fill. Other big bores get as many shots, but at less than half the power. At the output of the the TexanSS, most other big bores get only 2 or at the most 3 shots. The TexanSS gets up to twice that number.

The TexanSS is filled to just 3,000 psi. Other big bores that reach this level of power need a tank-robbing 4,500 psi fill that drains the biggest carbon fiber tanks quickly. But with the correct valving that much pressure is unnecessary. Let’s talk about that valve.

The TexanSS valve is a miracle of engineering. Every other big bore is installing heavy strikers and powerful striker springs to knock open their valves long enough to generate the airflow required for power. The Texan/TexanSS valve doesn’t work that way. The striker spring installed in this rifle is designed to be match the shape and size of the valve opening to allow maximum airflow with very little impact. As a result, the TexanSS cocks easier than almost every other PCP in the world. I’m not just talking about big bores, but smallbores, as well.

I had told reader GunFun1 how easy the Texan cocks, so I tried this one and was surprised to feel some resistance when closing the bolt. That’s where you feel all the cocking effort. I opened the bolt again and looked at the power adjuster. It was set for maximum power with the heaviest bullets. My .45 caliber Texan I tested 2 years ago arrived with its adjuster set at medium power so I wondered what had changed. 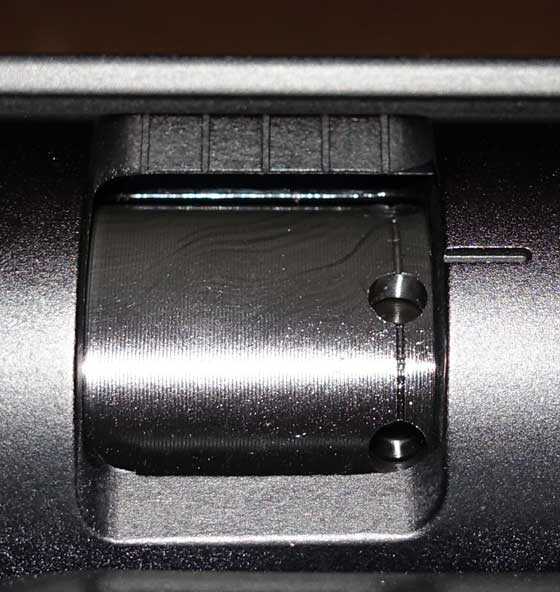 As it comes from the factory the power adjustment is set on maximum. Rotate the cocking lever forward to expose this adjustment. Push the holes up to decrease power; down to increase. 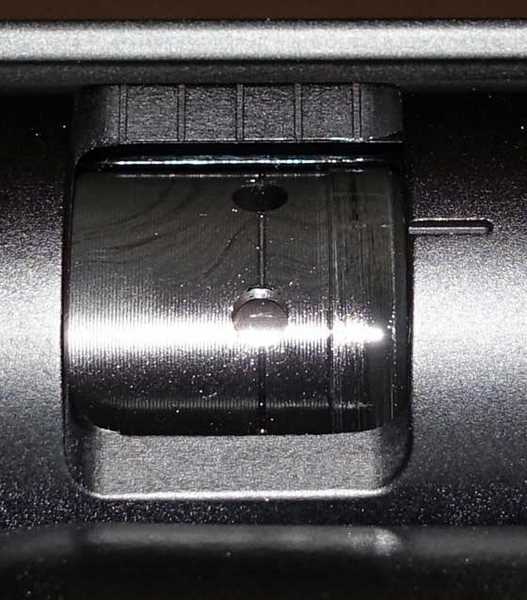 The power has been decreased to just over half. As you can see there are multiple holes in the adjustment wheel.

I talked with AirForce owner, John McCaslin about it, and he told me customers were chronographing their new guns, looking for the maximum power (heaviest bullet at the fastest velocity) it could develop. McCaslin said he now sends his Texans and TexanSS rifles out with this adjuster set on max power to reassure buyers the rifle will do what the company claims. He also told me something very disturbing.

He said people are buying aftermarket striker springs and installing them for even more power. They are also over-pressurizing the air reservoir, in an attempt to do the same thing. These non-standard springs are hammering the strikers too hard, sometimes causing irreversible damage to the guns.

I remember in 2004 when the Condor first hit the market, I was the AirForce repair technician and some people did the same thing. One man, who called himself “Mr. Condor” online, was telling people to install a heavier striker in the gun for more power. I had to rebuild Mr. Condor’s brand-new air rifle (it was only a couple months old) when he brought it to the AirForce plant in a paper bag!!!

The gun’s frame was damaged, but we managed to get it back together and working again with new parts. And I saved the valve he destroyed with his “slide hammer” heavy striker — so I could show folks one day in the future, when people didn’t believe things like that happened. 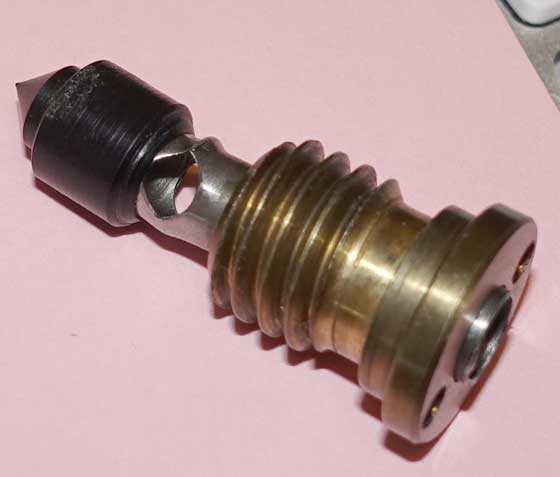 Mr. Condor was advising people to install a much heavier striker in their new rifles. This is his valve that we replaced after a couple hundred shots were fired. His overweight striker destroyed this valve and hammered the gun’s frame loose!

The striker spring found in the TexanSS was designed by AirForce. It can’t be purchased commercially. They designed the gun so that the spring is under almost no preload tension at rest. You really need to experience it to appreciate it. 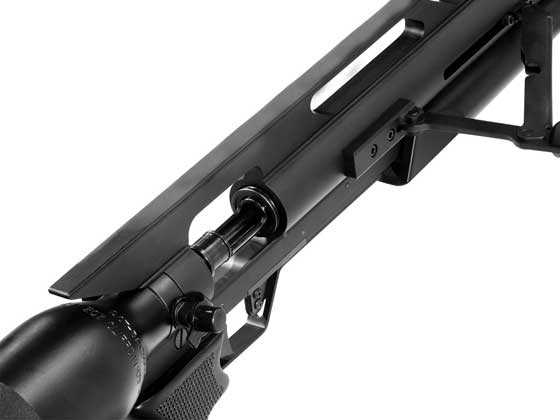 Open the sidelever and the bolt goes forward with zero resistance. As the bolt lever is pulled back, the sear catches the striker, compressing the 25 lb. striker spring while closing the breech.

Now we come to the part that’s difficult to write and even harder to understand. The TexanSS is infinitely adjustable within its performance range. You can shoot a 143-grain lead ball or you can shoot a 350-grain lead slug. There is no end to the number of different bullets that can be fired, and the rifle can be adjusted for each of them. You can adjust the gun to shoot fast or slow for any projectile that you load. And I can hear you now, “Why would I want anything but fast?”

You would want to adjust the velocity to get the best accuracy from each projectile. That won’t always be the maximum velocity. Airguns like the TexanSS are thinking man’s airguns, because they require some thought and reflection to get the best performance. If you take the time to read the report I did on the Texan, linked above, you’ll find that I got the best accuracy with a 215-grain semi-wadcutter with the power adjusted to somewhere in the middle range. At 50 yards I put 5 bullets into a group that measured 0.762-inches between centers. At 100 yards I put 6 of the same bullets into 1.506-inches! I’m hoping to see the same level of accuracy in the TexanSS.

The trigger is 2-stage and not adjustable. It breaks at a light weight that I will measure for you in a later report. It’s advertised to break at 2.06 lbs. I read a customer review that mentioned this is not a target trigger. No kidding! And a Corvette is a poor choice for spreading manure! Come on, guys — this is a hunting rifle, pure and simple!

The safety comes on automatically when the rifle is cocked and loaded, and you can push it off with your trigger finger. Just push forward and it goes off quietly and crisply.

The compressed air is contained inside the reservoir that also serves as the butt of the rifle. That gives the rifle a different feel when it is shouldered, and some shooters find it distracting. I will show you how to hold it in a future report.

The reservoir has a pressure gauge, so you know at a glance where you stand, and there is a Foster connector on the other side for rapid refills. Allow about a minute to fill from 2000 to 300 psi to keep heat from building up.

The reservoir is installed and left on the gun. A spanner that’s included lets you attach the reservoir to the action, and after that you fill with the tank/stock on the rifle.

One more feature on the reservoir — the buttplate is on a sliding collar that provides about 1.5 inches of pull adjustment. 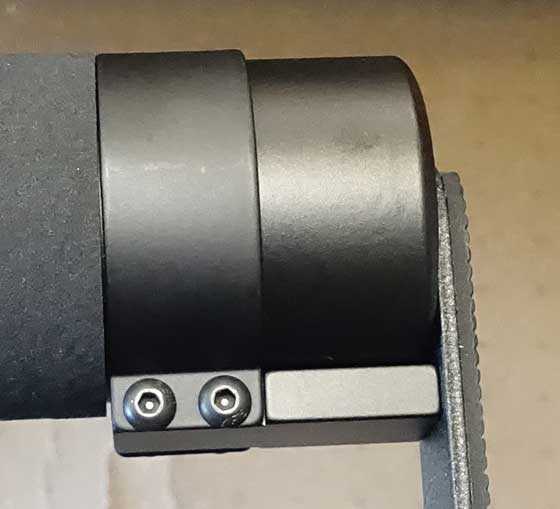 Loosen the two Allen screws with the wrench provided and slide the buttplate forward or back to suit your taste.

Like all AirForce Airguns, the TexanSS comes with a paper manual and a DVD that addresses their entire range of airguns. The manual is well-written and well-illustrated.

That’s all I’m going to say today, but there is much more to describe about this very different air rifle. This review may take more than the usual three reports!