Today I begin looking at another price-point PCP (PPPCP) that hit the market this year. Like the Umarex Gauntlet, the Gamo Urban is packed with features and set to sell at just under $300. It does have some differences from the Gauntlet, though, and we will look at them in today’s report.

The Gamo Urban I’m testing is a bolt-action .22-caliber 10-shot repeating air rifle. It fills to 232 bar, which is 3,365 psi. That’s important to know because the Urban will be difficult to fill all the way with a hand pump. However, you may not have to fill it that full. I will address that when I test velocity. If you watch the video on the Pyramyd website, you will see why I say that.

The Urban has no regulator, so Gamo has opted to control the velocity with the air valve. That is a more reliable way to do it, because there is one less mechanical thing to go wrong.

The magazine does not extend above the receiver. That means you can use a one-piece ring mount that so many shooters seem to prefer.

The Urban does not come with a single shot adaptor. The way the receiver is made it might not be convenient to load that way.

Filling is via a probe, which is a bother. I wish manufacturers would realize how convenient the Foster quick disconnect is, both to use and also for standardization. To access the fill port pull off the plastic sleeve from around the pressure gauge.

The Urban I’m testing weighs 7 lbs., exactly. I see the specs say 6.7 lbs. but I weighed mine on a balance beam scale and got 7 on the nose. That makes it reasonably light.

According to the manual the cheekpiece is supposed to adjust up and down. But there are no directions in the manual for how this is done, and I see no way of doing it.

The safety is not automatic — a feature for which I must applaud Gamo. The shooter is responsible for the safety of the rifle at all times — not the manufacturer. Pull the safety lever back to apply.

Gamo says their Custom Action Trigger (C.A.T.) comes adjusted to a 3-pound pull. It is two stage and pulls very smooth. And I do mean very. I think I can get used to this one! I will say more when we get to accuracy testing.

The Urban comes with a Whisper Maxxim silencer on the end of the barrel. It is permanently attached to the rifle, so there are no legal issues to be concerned with. It cannot be removed without cutting it off the gun. It does have multiple baffles, but it isn’t as quiet as you might like. I couldn’t shoot the rifle in my small suburban back yard, but if you are some distance from your neighbors it would be okay.

The Urban is all black. The metal is matte and the stock is a matte black plastic thumbhole design that’s ambidextrous. The bolt handle will remain on the right side though. The butt pad is soft rubber, so the rifle will stand up in the corner without sliding on the floor and will also hug your shoulder.

The manual doesn’t tell how the mag is removed from the rifle. Of course the bolt must be cocked to be back out of the way, and then just push on the right side of the mag, or pull it out on the left. It slides out the left side of the receiver without any hesitation. It is magnetically attracted, so when you insert it back in the receiver, feel for the magnet’s attraction. It’s light but it’s there. I’ll tell you why this is important in a moment.

The Urban magazine loads easier than most rotary mags. Simply drop in a pellet and rotate to the next hole There is one problem, though. It is easy to load the pellets backwards! The manual doesn’t cover it, so in the interest of doing a thorough review, and also because I am a klutz, I loaded it backwards the first time. By “backwards” I mean the pellets were facing the wrong way when the mag was inserted into the receiver— skirt-first. You can put the mag back into the receiver when it’s loaded this way, but you won’t feel that magnet suck it in. Nor will the bolt close. That’s why I say feel for the magnet’s attraction.

I watched Tyler Patner’s video review before writing this report and he mentions the white dot that appears on the magazine with the last pellet. You can keep on cocking and firing, but the pellets are all shot when the dot can be seen. Actually, the dot appears when the last pellet loads into the breech, but after that, it remains there. 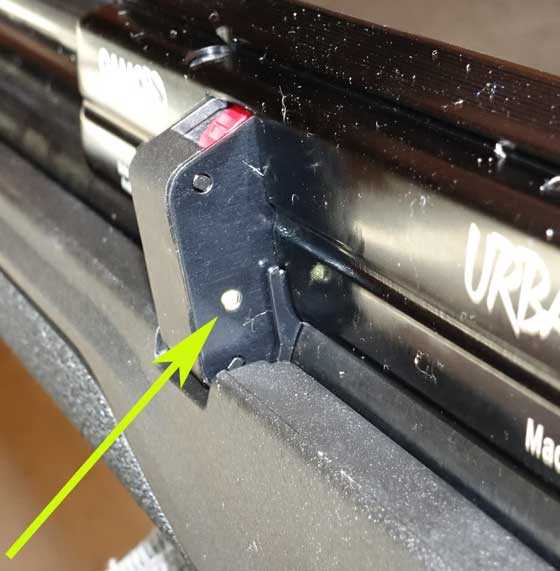 That dot (arrow) tells you this is the rear of the magazine, which is important for loading the pellets. Sorry about the dust!

It’s difficult for me not to compare the Urban with the Gauntlet, even though the rifles I’m testing are different calibers and have different features. The Urban is lighter, feels smaller and so far the magazine works as it should. The trigger is nice, though I doubt it will ever be as nice as I was able to adjust the trigger on the Gauntlet.

There will be fewer shots per fill with the Urban, but they will each be at higher power. Watching Tyler’s video, the Urban seems very accurate, and we will be testing it out to 50 yards, so we will all find out. This promises to be a good series!