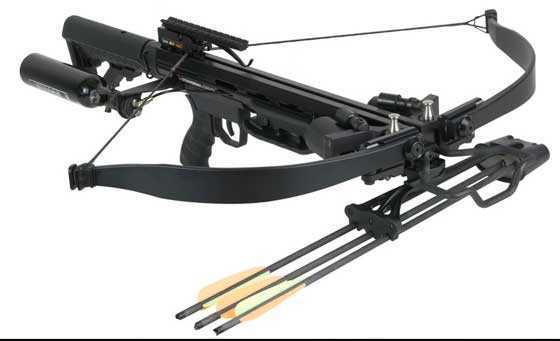 Today I’m going to sight in the Onyx Tactical Crossbow. Fortunately I have sighted-in a crossbow once before, with the Sub-1 crossbow. So, even though the Onyx cocks pneumatically, I know how a powerful crossbow works in general.

I need some kind of sight for the bow because it doesn’t come with anything. Pyramyd Air sells two different Burris crossbow scopes — a budget 3X32 XB that looks like an entry level scope and a 2-8X36 XB that looks upscale. I didn’t have either scope on hand so I used the 1.5-5X32 Hawke that came with my Sub-1. It’s much closer to the upscale scope that Pyramyd Air sells.

I just took it off my Sub-1 and mounted it to the Onyx. Since both bows have Picatinney rails, the mounts fit the Onyx perfectly. Then I headed to my back yard to sight in. Instead of telling you let me show you how that went, but before you watch the video, know three things:

1. This was the first time I ever shot this bow.
2. The video is 5-1/2 minutes long, but it took me two hours to complete. Because of issues with light I actually filmed it twice.
3. For some reason every airplane in the state of Texas decided to fly over me as I filmed this the second time, and you’ll hear them. If the results hadn’t turned out as good as they did I would have filmed it again!

I mentioned lubing the flight deck rails in the video. Do that to prolong the life of the bowstring. You can also apply wax to the bowstring itself.

Notice how careful I am with the bow. I’m not used to pushbutton cocking yet and I wanted to be safe.

Notice that not all the air is exhausted when the bow fires. I exhausted the remainder before setting the bowstring for the next shot. If you forgo that step you can set the bowstring but it takes about 80-100 pounds of force. It saves a little air but I wanted easier cocking, so I didn’t do it.

A good crossbow scope has an adjustment for the muzzle velocity of the arrow. You set that number and, if it is correct, the reticle inside the scope will coincide with your target at the ranges indicated. It’s the same thing as holding over in field target, only the crossbow scope reticle is set up for it a lot better. Let’s look. 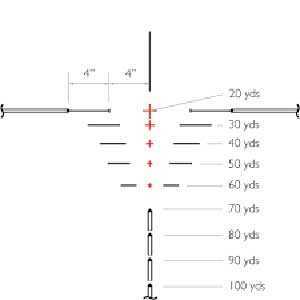 The reticle in my Hawke crossbow scope looks like this. When the bow is sighted in and the correct velocity is dialed into the scope, the arrow flies to the aim point at each indicated distance. All you need to do is determine the range pretty closely. 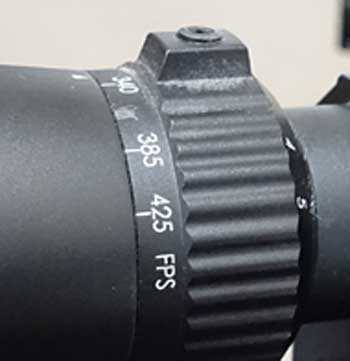 Adjust the velocity setting on the scope to match the velocity of the arrow you are shooting. Then the arrows will go to the aimpoints indicated in the reticle.

The Onyx fires with some vibration that is both heard and felt. And there is some recoil. Just hold the bow steady as you squeeze the trigger, because it takes that 330 f.p.s. 20-inch arrow a long time to clear the flight deck.

This sight-in session went very well. I have never sighted-in a crossbow before now — the Sub-1 came to me already sighted-in. But as you have seen in the video the process is straightforward and not that complex.

Next I will shoot the Onyx at distance. I will start at 20 yards, then move to 30 then 40 and finally 50 yards if I am still doing okay. The bow can easily shoot twice that far, but who knows whether BB Pelletier can?

The Onyx crossbow is performing to spec so far. When I first saw it I thought it was complex and heavy, but after shooting it and taking the time to learn how it works I have a different opinion. I see a hunting crossbow with power and what appears to be great accuracy. It also safely solves several typical crossbow problems. The next test at distance should be the clincher.