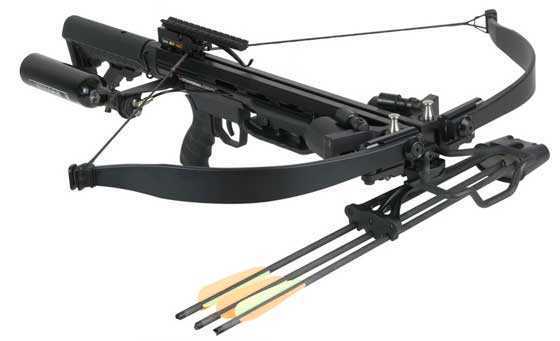 Today will be a completely different blog! This time old BB is the student. This is about a crossbow, which I do know a little about, but this crossbow operates differently than any other.

Crossbows are to archers what rifles are to spear-throwers. They remove most of the skill required for the job and deliver powerful shots that are also accurate out to ranges that even experienced archers cannot achieve. It’s been that way for centuries, and for all of that time the longbow archers have insisted that crossbows are not true bows. I have to agree with them. A longbow is one thing — even when it has modern technology like sights and cams to reduce draw weight — things that weren’t around when this controversy started.

Crossbows are something different. They are more powerful than longbows and, if handled improperly, they can be more dangerous than longbows, though you have to handle both with caution.

The reason people lump them together is they both have bow in the name and they both shoot arrows — though technically the “arrow” fired by a crossbow is called a quarrel or bolt. Longbow arrows were also once called bolts, but the term arrow has taken a firm root with them. I’m not going to get into the history of the crossbow in this report (though that might be a fun one to do, sometime), but you do need to acknowledge their differences, because some of the crossbow operational quirks can maim and even kill you!

The Onyx is a conventional crossbow, except for the pushbutton cocking feature. It has a 225 lb. draw weight and can be cocked manually. To do that you either need to be Superman or to use an aftermarket cocking aid. For this bow I think a cocking windlass is required. Some are made to fit specific crossbows, while others are more universal and will fit a wide range of models. 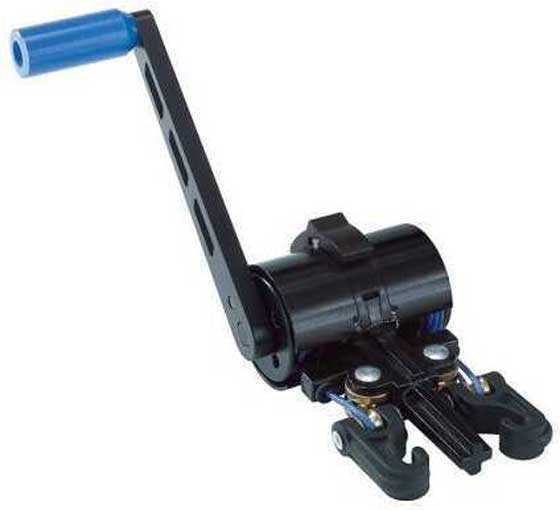 This is a universal cocking aid/windlass. It attaches to the butt of the crossbow and slowly pulls the bowstring back to the point that it is caught and held by the trigger mechanism (technically a part called the nut). I have no idea if this one fits the Onyx — I simply show it for information.

What the pneumatic mechanism on the Onyx does is push the bow’s limbs (the two springy arms on either side of the bow) forward to put tension on the bowstring! I remember at the Pyramyd Air Cup this year I became quite excited when a Pyramyd Air technician showing the bow to me put his hand in front of the arrow! It looked to me like the bow was cocked, but as I have just explained — it wasn’t.

The online specs say the Onyx weighs 11 lbs. Without an air tank the test bow weighs 10 lbs. on my balance beam scale, so I think the specs are with the air tank attached. That means the Onyx is heavy for a crossbow.

The overall color is black, Most of the bow is aluminum and steel; the limbs are some sort of high-tech synthetic and the forearm grip, the pistol grip and the buttstock are synthetic.

The buttstock is an AR type that is adjustable to six positions of length. The pull length varies between 13-3/4-inches and 17-3/4-inches.

The pistol grip is also an AR A2 style. I have no idea whether it will interchange with actual AR grips, but economies of design would dictate that it should. It certainly looks like it would from the outside.

The forearm grip is designed to keep your off hand away from the flight deck and the bowstring. This feature is seen on many crossbows today, because that string can remove digits when the bow fires!

You are probably asking right now who needs a $1,550 pushbutton crossbow? A good hunting crossbow can be purchased for $250-300. A premium hunting crossbow will cost $1,000 to $2,500. My Sub-1 from Mission Archery now sells for about $1,400, without a sight. I reported on that back in 2018. The Onyx is based on a premium crossbow, but the pneumatic technology they added to give it one-button cocking does increase the cost.

Why you need it

Okay, imagine you are sitting in a tree stand waiting for that prize whitetail buck to come along. Suddenly you see him working his way through the treeline. You count at least 10 points on his antlers at this distance. This is the one you want. He is 90 yards away and walking toward you like an infantry scout on patrol, looking for boobytraps. Now tell me — did you climb up into that high seat this morning with your crossbow already cocked and loaded? And did you sit there with the bow cocked for 2-1/2-hours? Of course not. Your mom didn’t raise no fools!

Well, then, are you going to cock your crossbow now? Sure, you say. I just have to wait to turn the crank slowly and then detach the crank mechanism, load an arrow and get ready to shoot when the deer isn’t looking. Good luck with that! His eyes and ears are sharper than yours and he has lived by his wits all his life. If you had a firearm would you have waited until now to load it?

Or — you could just push the button on the Onyx and be ready silently in a second, because the arrow is already loaded.

I first looked at the bow in the box it came in and carefully considered everything inside. Had this been a pellet rifle I would have had it out and shot by this time. But the Onyx is something I know very little about.

The Onyx crossbow collapses to less than 11-inches wide for transport. 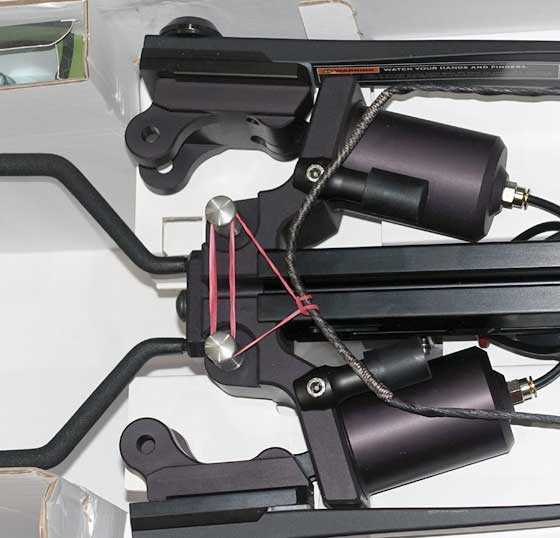 As the bow comes to you, the quick-release pins that allow the limbs to fold are held in place by a rubber band that also holds the loose bowstring. This picture is as much for me as for you, so I remember to do this after testing the bow. Because I’m keeping that rubber band!

The limbs move around when they aren’t pinned in position for firing. I think a small bungee cord around them at the rear would be handy.

The manual is well written in all English and is 37 pages long. I read it cover-to-cover before doing anything with the bow. I know how crossbows work, but this one is unique. Look at it! It doesn’t have cam wheels! The power is supplied directly by the energy stored in the limbs, without passing through a complex series of pulleys that reduce the cocking effort — because the Onyxdoesn’t need its cocking effort reduced!

I recommend that everyone who gets the Onyx reads the manual before they do anything. There are straightforward things you need to know, of course. Things like never putting your hands on the flight deck in the path of the bowstring when the bow is cocked. But there are also things you might never consider. Like the fact that leaks from the source of compressed air can cock the bow without your knowing it! Read the manual!

The power source — for cocking

Let’s understand that this bow launches arrows by means of the energy that is stored and released by its bow limbs. In that respect it is a conventional crossbow.

The unconventional thing is how the bow is cocked. The Onyx is designed to use compressed air, supplied by an Air Venturi 3000 psi 13 cubic-inch tank that is regulated down to 1100 psi. The manual says the bow was designed to be cocked with high pressure air, and if you own a compressor that is the thrifty way to do it. But it can also be cocked by an 88- or 90-gram CO2 tank. 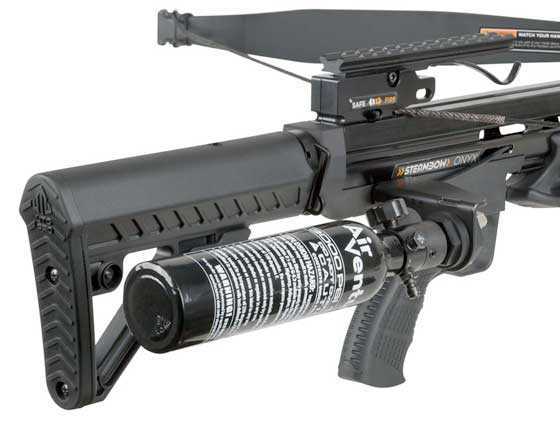 The Onyx is set up to use a regulated Air Venturi 13 cubic-inch tank as a power source for cocking.

The tank coupling on the bow comes to you as shown above. That would be the setup for a right-handed shooter. That coupling can be switched around to point the tank forward, which moves the weight balance of the bow forward. It can also be moved to the left side of the bow for left-handed shooters, though that involves more work than a simple switch. An 88-gram or 90-gram disposable CO2 cartridge can also go into the coupling in place of the air tank.

Those 88-gram CO2 tanks are not cheap and since they only cock the bow a couple times (maybe once more in warmer weather), what good are they? Well, let’s say you are about to hunt caribou in Canada. Imagine all the problems trying to carry an air tank through the TSA here, plus the CATSA in Canada. How much easier it is to just buy a disposable CO2 tank when you get where you are going.

The manual tells you to disconnect the air source when it’s not in use. That prevents the possibility of an accident. There are also safety things to do with the button that I’ll cover now.

Let’s look at this button that cocks the bow. It’s located in front of the forearm grip, where it is centered. Both right- and left-handed shooters will find it convenient. When the air source is connected push the button in to cock the bow. That part is almost silent and takes about a second in 60+ degree weather. Pull the button out to uncock the bow. That emits a long hiss as the air escapes and it takes a lot longer for the bow limbs to collapse back to their un-tensioned shape. And you may have caught the fact that with this system you don’t have to fire an arrow into the ground and risk damaging it.

When the button is pushed forward like this, the bow will automatically cock. It takes a second and is very quiet.

It’s easy to get confused about this technology when you learn the bow uses high pressure air. Here is a quote from the manual:

“A Steambow (Onyx) is a combination of a conventional crossbow and a PCP air rifle.”

Yes, it is, but don’t get confused. The high-pressure air has nothing to do with launching the arrow. It is there to cock the bow, and that is all that it does.

That’s enough for this report. I hope you can appreciate that this bit of technology will change the world of crossbows. It will allow more people to use them, and will allow hunters to be safer with them.

There is a lot more to learn about the Onyx. I have only addressed one of the three safeties, plus I need to cover other things that are more conventional.

Am I going to test the bow? Yes, indeed. So there is a lot more coming.