“I hear it’s really a 10-meter target rifle the Russians disguised as a cheap toy, so their kids would learn to shoot like marksmen.”

“The ones with metal magazines and steel receivers are the only ones to buy. When they switched to plastic the rifle went in the trash can.”

“I know a guy who spent over $500 dressing one up to shoot as a target rifle. He beat FWB match rifles with it.”

These are just a few of the many things that have been said about the IZH 60 and its repeating brother, the IZH 61. Today I begin a review of the infamous IZH 61 repeating spring-piston air rifle. Let’s begin with an interesting story of the start of Pyramyd Air. Founder, Joshua Ungier was in the former Soviet Union, buying decorative architechtural stone for his company, Pyramyd Stone. But I’ll let him tell the story.

“I believe what really started PA was my non-stop traveling to Russia and Germany, sometimes for a month at the time. One day my wife asked me not to go to Russia anymore, or at least not to go for awhile. I had been on the road a lot that year, and to be honest I got really tired of frequent travel. Freezing in Siberia one day and the next day boiling in beautiful Uzbekistan was really a lot of fun but after a while it got old.”

After seeing the sleek IZH-60 in a window display in Moscow, I decided to buy one for myself and bring it back to Ohio. Well, it didn’t happen. That rifle is still in Russia. The paperwork required and the little time I had to register it and get a permit that was not issued in time were the reason I missed out. In the meantime, my former partners produced a series of air pistols that were sold in the USA.”

After my partners and I split to pursue different business directions, I had a eureka moment. It was an epiphany. I liked airguns. Period. And you can shoot at home without wrecking your house. Although I have a very large basement that in one area offers almost a 30-yard range, shooting a firearm of any caliber bigger than a .22 long rifle has, sometimes, disastrous consequences — like ventilating a perfectly good cinderblock wall. ” Yada, yada…

So, is that how the first IZH 60 came into the United States? Who knows, but it is an interesting story. The point is, they did come in and for many years they were priced well below $100. They were never as cheap as $30, but I remember seeing them for under $80. And I do remember a special sale where a desiccant package broke open in the shipping container and a whole bunch of rifles had to be stripped completely to remove all of the granules. Those rifles might have been priced close to $30 — I really can’t remember.

I tested and wrote about them a lot in the 1990s, and some of the lead-in discussion is true. A man I knew really did spend over $500 on his rifle (half was spent on getting a laminated stock made, then there was the Anschütz target rear sight), but that rifle did not outshoot real 10-meter rifles. In the end it was probably as good as a Daisy 853.

Last year EAA, the last company to import the IZH airguns before the import ban, sold off all their remaining airguns. I bought several to review for the blog, including two IZH 61s. Both rifles were in the box, but they were both incomplete. 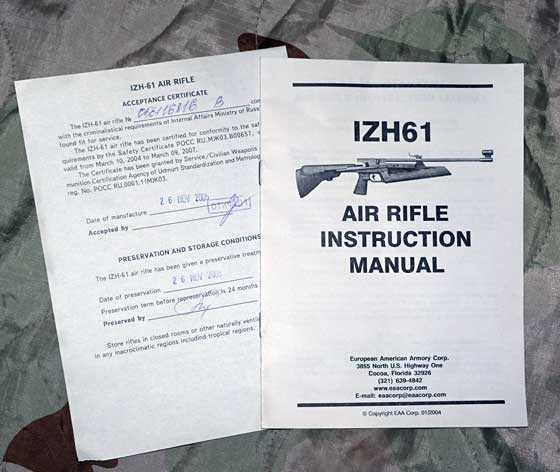 Manual and certificate. Don’t strain your eyes. This one was accepted on November 26, 2005.

Well then, except for the spare mainspring, what was missing? Neither rifle had a clip. And the IZH 61 is designed to need a clip to operate. The single-shot 60 doesn’t need one, but the repeating 61 won’t work without one. What to do? By the way, almost everyone calls this clip a magazine, so use that term if you are looking for one. Only use the term “clip” when you want to be correct.

I went online to Ebay and found IZH 61 clips — labeled as magazines, of course. Some of them were even the highly-regarded metal ones. I bought three from Ivan in Russia. I know that sounds like the setup for a joke, but it’s the truth. I paid $7.50 for three metal IZH 61 clips and Ivan paid about $4.50 in Russian postage to send them to me. I ordered them in November and they were due by the first of February, but they arrived in late December. 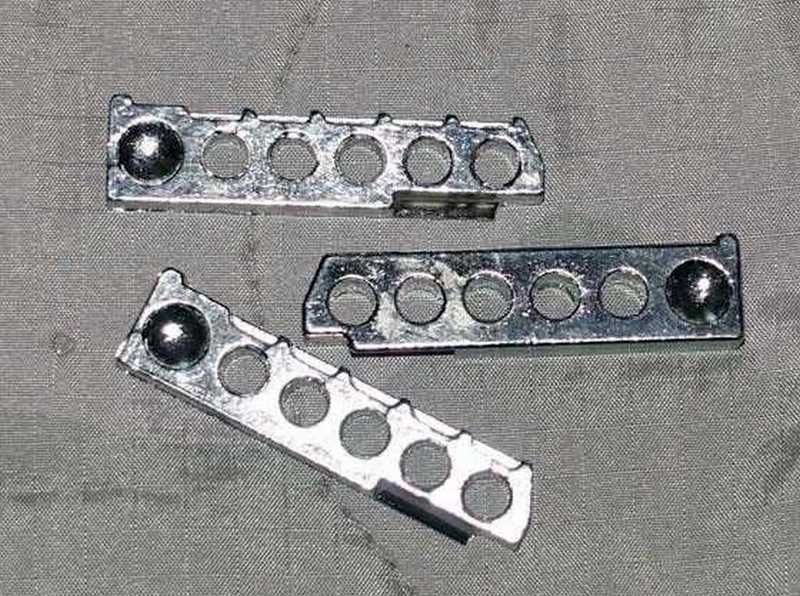 Of course while I was doing my thing Pyramyd Air went out and had the magazine (I’ll call it that because Pyramid Air does) for their TR-5 rifle modified so it also works in the IZH-61, but I didn’t find out about that until the SHOT Show. The TR-5 rifle is a copy of the IZH 61 and I have already tested both it and the TR-5 Pro target rifle for you. Now I’m going to test the rifle they were copied from.

The IZH 61 is a unique spring-piston air rifle. It has a space-age look and yet was designed to be a youth target rifle. It cocks via a long sidelever on the right side that makes cocking easy. However, the spring-loaded latch to unlock the lever has to be pushed back and that takes some getting used to. 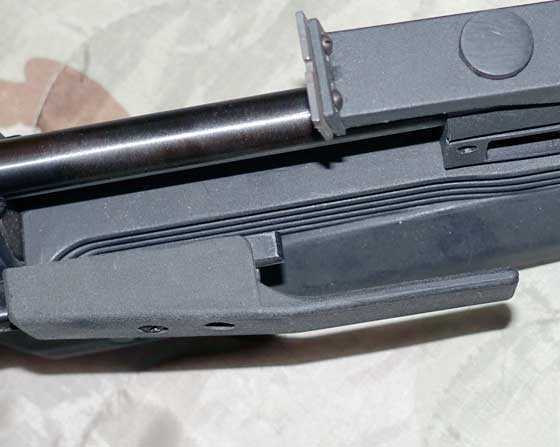 The sidelever is held shut by a spring-loaded latch that takes some force to release.

The gun is not powerful, nor can it be “magnumized” easily, as you read in the beginning. It is possible to boost the power but you do so at the cost of a harder cocking effort and possibly a stronger jolt with more vibration. Just leave it alone and enjoy an air rifle that’s designed for a kid, though he be 50+ years of age.

The stock is adjustable for length of pull. The range is from just under 12-inches to just under 13-1/2-inches via a thumbscrew that loosens and tightens anywhere within the range. 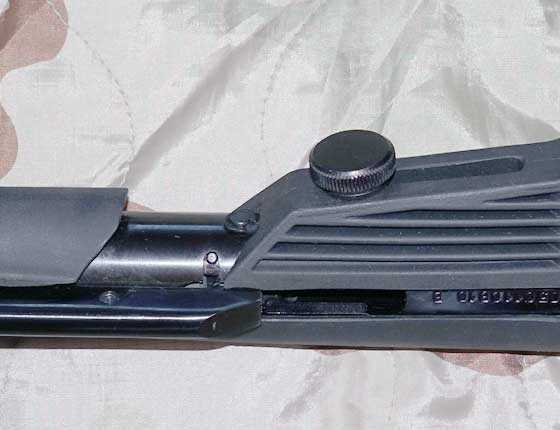 The buttstock adjustment screw sets the length of pull anywhere you want within the limits.

Both of my rifles came with sights. If they had not, sights are available on Ebay, though they may not always be the sights you need. When the design changed from a metal receiver to plastic the design of both of the sights also changed — though I can’t say that both changes happened at exactly the same time. The later sights that are still being made are simpler in design.

My rifle has the later front sight design that does come off the rifle, and will accept an aperture insert, but the aperture is very hinkey because of how small it has to be to fit through the slot in the globe. The square post that comes in the sight is crisp and is probably the best bet unless you change everything. The fact that the entire sight comes off the rifle means that an different front sight globe could be put on, if one can be found. 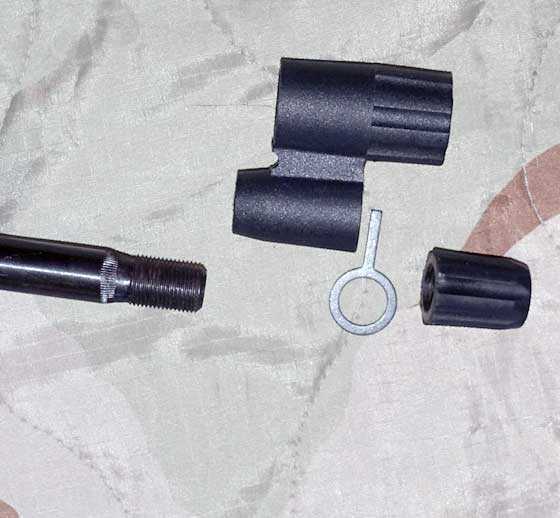 The rear sights on my two rifles are later ones, as well. They don’t look like they accept the peephole plate. But they adjust in both directions and, for a rifle in this price category (a US retail of perhaps $150-175, if they could be legally imported) that’s probably as good as you’re going to get. 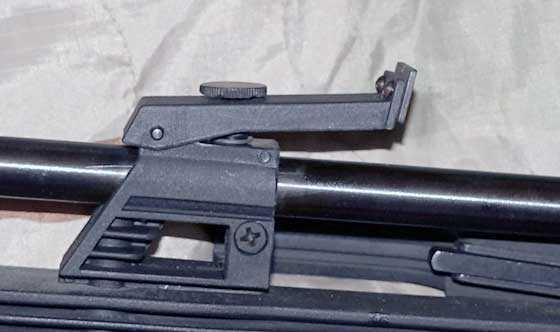 Back in the day the IZH 60 and 61 rifles came with a globe front sight that accepted conventional replacement inserts and a rear sight that could be converted to a peep sight if a round plate that came with the rifle was attached. The top of the rifle’s receiver was dovetailed so the rear sight could then be moved back, once the peep conversion was made. 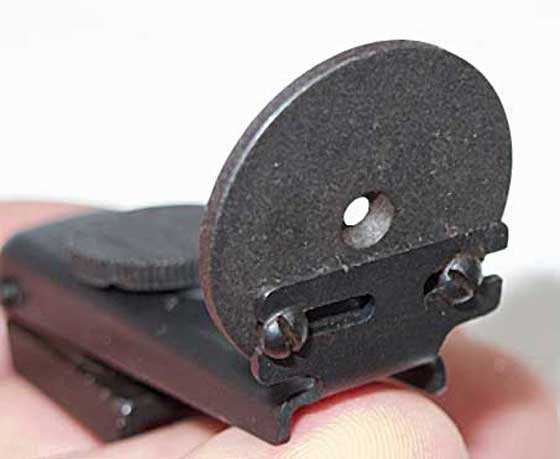 The old-style rear sight could be converted into an adjustable peep sight.

That peep sight wasn’t much as target sights go, but the cleverness of the Russian design captivated everyone who saw it and that 50-cent part in the box bought the IZH brand thousands of dollars of goodwill.

This is where the little rifle gets complicated. To feed the pellets the bolt must be withdrawn from the clip so the clip will advance to the next pellet, which happens when the rifle is cocked — or it is supposed to. My two rifles are very stiff from sitting around for 15 years and the clip advance function was a sometimes thing. But the mechanism is external to the receiver and I could always push on the catch to make it work, so it’s still a repeater — sort of.

I lubricated all the parts that I could reach in the mechanism on one rifle and got the repeating function working 80-90 percent of the time. I believe as the rifle gets used more it will start to function as it is supposed to at some point.

When you pull back the sidelever to cock the mainspring the clip pops out to the left by one chamber. When loading a clip with 5 pellets you push it all the way in to the right, putting tension on the clip spring. Unfortunately after the final shot the bolt is still stuck through the last pellet chamber, so the rifle has to be cocked again to remove the clip. Or, you can just leave the empty clip in the receiver until you want to shoot again and no dry-firing is required. 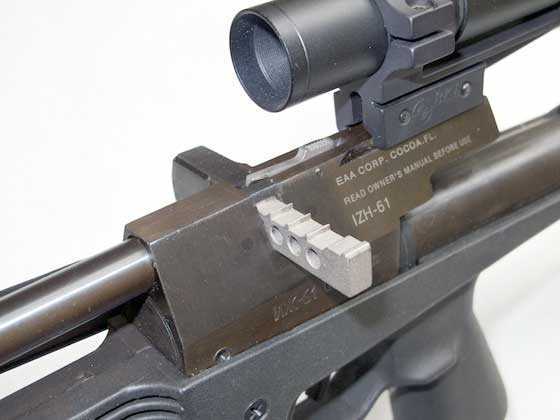 The clip is out as far as it comes without removing it from the rifle. The silver lever on top of the receiver can be pushed down to remove the clip when the sidelever is pulled back for cocking. The dot sight shown here does not come standard.

A silver lever on top of the receiver releases the clip anytime the sidelever is pulled back. This allows unloading the rifle at any time.

The rifle has a hammer-forged barrel that in the early model 60 was very accurate. When the design changed to plastic receivers I did test some model 61s whose accuracy had fallen off, but I bet that wasn’t due to the barrel. I will try to see just how accurate these two later rifles may be.

The IZH-61 is a nifty little plinking air rifle, very much like the TR-5 that you can buy today. It was never as good as its reputation made it out to be, but it is still an iconic air rifle for those looking to shoot for fun! I plan a thorough test of the rifle and, who knows — I might test both of them at some point. We shall see!

I wish I had been able to get a model 60 single shot, because that is the rifle I liked the most. I will always be open to getting one if the price seems right, but these days they do command a lot of attention.