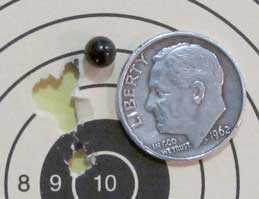 Today we look at the accuracy of the new Air Venturi Dust Devil Mark 2 BB. From this point on I will just refer to them as Dust Devils.

I shot from 5 meters, using the UTG Monopod as a rest. I was seated, and using the monopod is almost as stable as a sandbag rest.

I only shot 5-shot groups today, so I could test more BBs. I decided to test accuracy with the two most accurate BB guns I have — the Daisy 499 Champion and the Springfield Armory M1 Carbine. When you see the results I think you will understand why I picked them.

I shot three BBs today. The first was a conventional premium BB, and I selected the new Crosman Black Widow for that. The next was the Avanti Match Grade Precision Ground Shot that’s made exclusively for the 499. You guys always want to see how they do in tests, so I almost always include them. And finally I shot the new Air Venturi Dust Devil Mark 2 BB — the one this report centers on.

We have already seen how the new Dust Devils stack up in one BB gun. The Lil’ Duke put 10 of them in 1.348-inches at 5 meters. The best it shot with BBs that are still available was 10 Smart Shot in 1.148-inches.

The two BB guns I’m shooting today are the most accurate I have, though the Lil’ Duke is certainly very accurate. Let’s start shooting.

The 499 put five Black Widows into a 0.44-inch group at 5 meters. That’s some shootin’! The group is high and left, but I didn’t want to fool with the sight on this test.

Next to be tried was Daisy’s own Avanti Match Grade Precision Ground Shot. This is the BB that’s made for the 499, and we expect it to be the best. Five went into 0.25-inches at 5 meters. That’s exactly a quarter-inch, and it is the best group of this test! 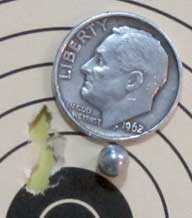 The 499 put five Precision Ground Shot in 0.25-inches at 5 meters. This is the smallest group of the test.

The 499 put five of the new Dust Devils in a group that measures 0.564-inches at 5 meters. It’s actually two smaller groups, as you can see. 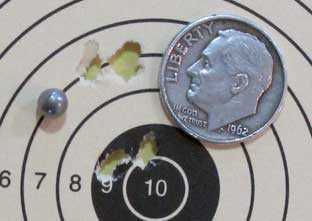 Now it was time to see what the Dust Devils could do when shot from an accurate BB gun that is not a target gun. The Springfield Armory M1 Carbine is the most accurate non-target BB gun I own. 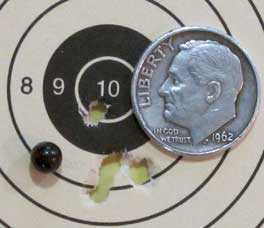 The M1 Carbine put five Crosman Black Widow BBs into this 0.38-inch group at 5 meters. This is the second-smallest group of the test.

Five Precision Shot went into a group that measures 0.651-inches between centers. That is larger than the Black Widow group, but it’s still extremely good for a BB gun. 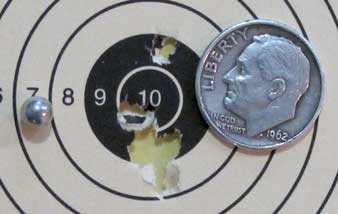 Now it was time to test the Dust Devils, which is what this report is all about. The other two BBs were just to give us some perspective on the Dust Devils.

Five Dust Devil BBs went into 1.15-inches at 5 meters. It’s the largest group of the test, but it’s still not bad for a BB gun. The Carbine put five Dust Devils in 1.15-inches at 5 meters.

I have to say that Dust Devils have decent accuracy. In the two guns I tested them in they were not as accurate as the other two BBs, but that isn’t the question. Dust Devils are a frangible BB that won’t bounce back at you from a hard target. Given that role, is the accuracy seen today okay? I would say yes. I plan to shoot them at the Bada Bang target, using the M1 Carbine, because they were made for something like that — rapid-fire at a hard target with safety.

And there is one more thing. The Dust Devils fed through the M1 Carbine’s magazine and semiautomatic action perfectly. That was one more test I intended running and there is more of it to come. I plan on shooting them in the Umarex MP40 submachinegun to see how they do there, as well. Given that the purpose of that gun is to shoot at targets of opportunity, a Dust Devil BB is as ideal as it gets.

The new Dust Devil Mark 2 BBs are holding up well. Let’s keep in mind they are one of only two BBs that are safe to shoot at hard targets, and that feature will be tested next time, as well. I think we have a winner here.