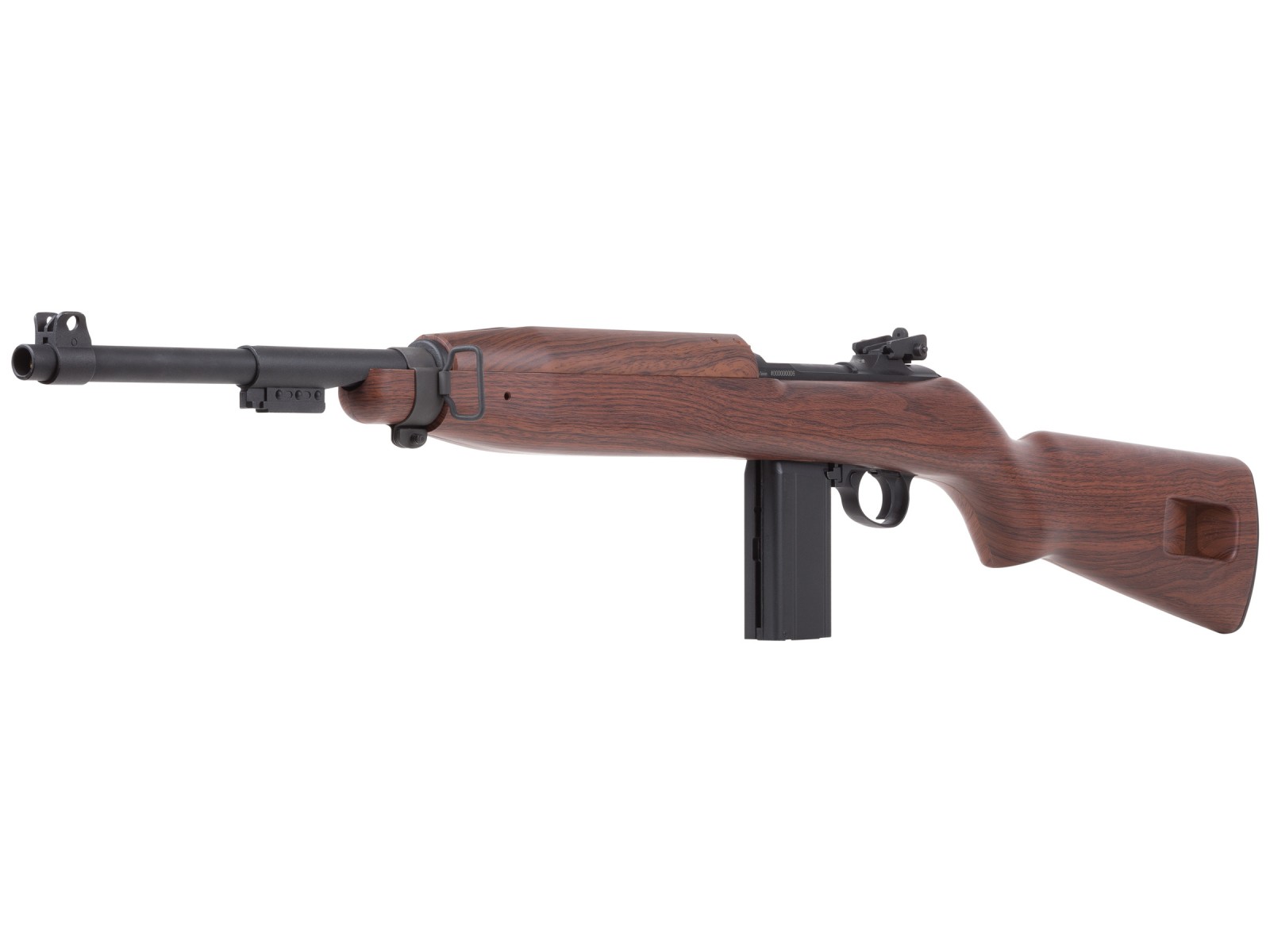 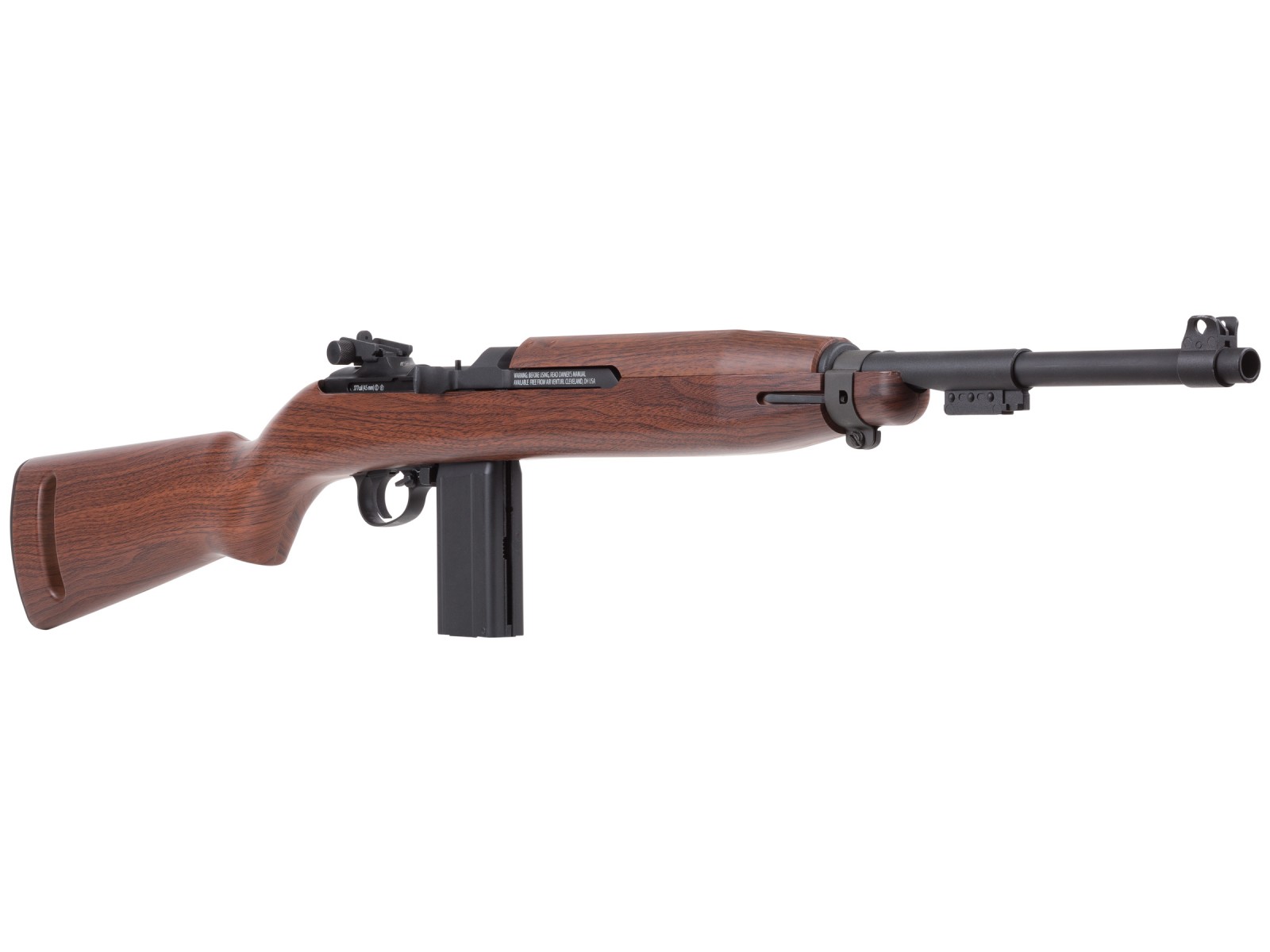 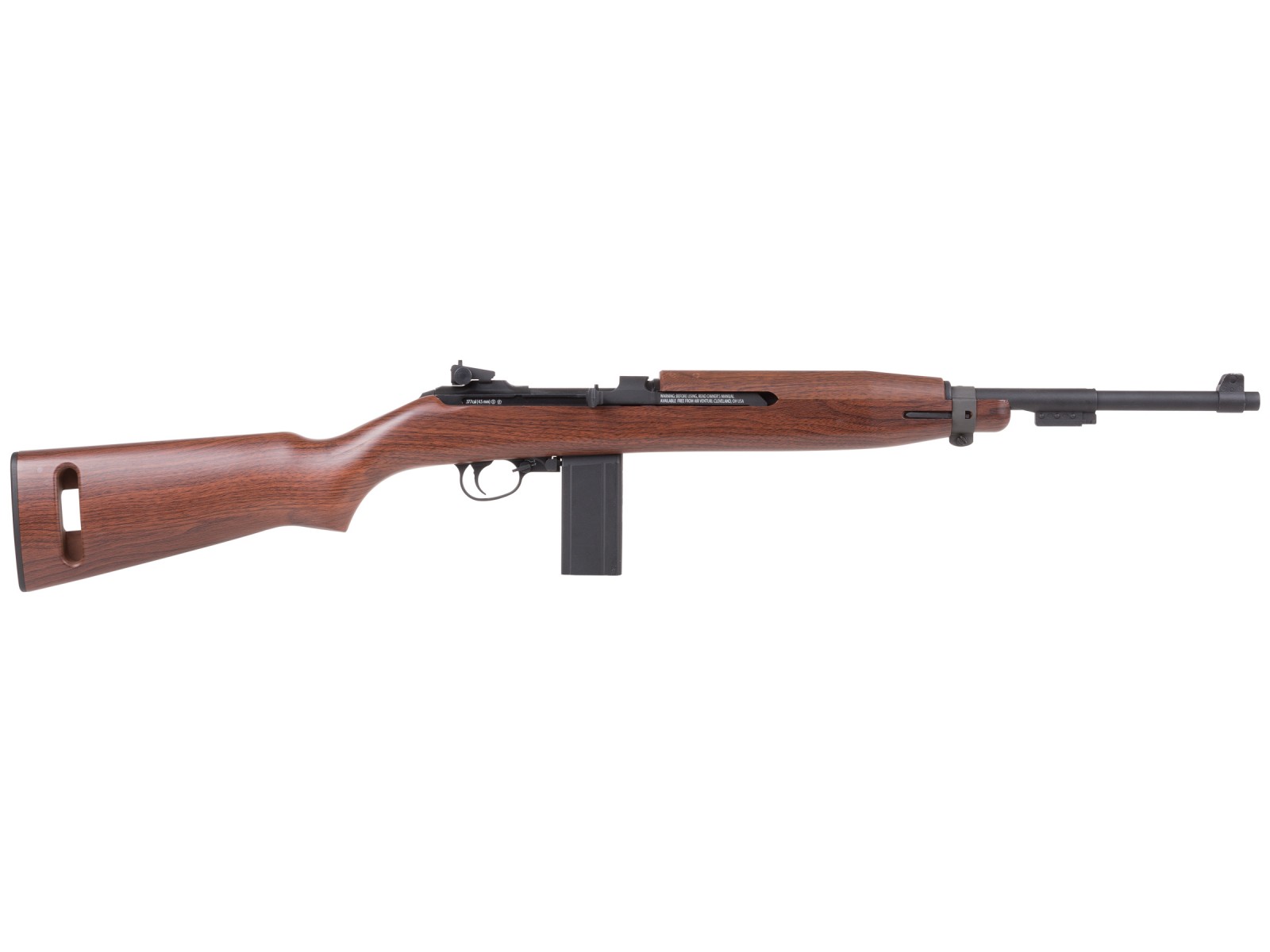 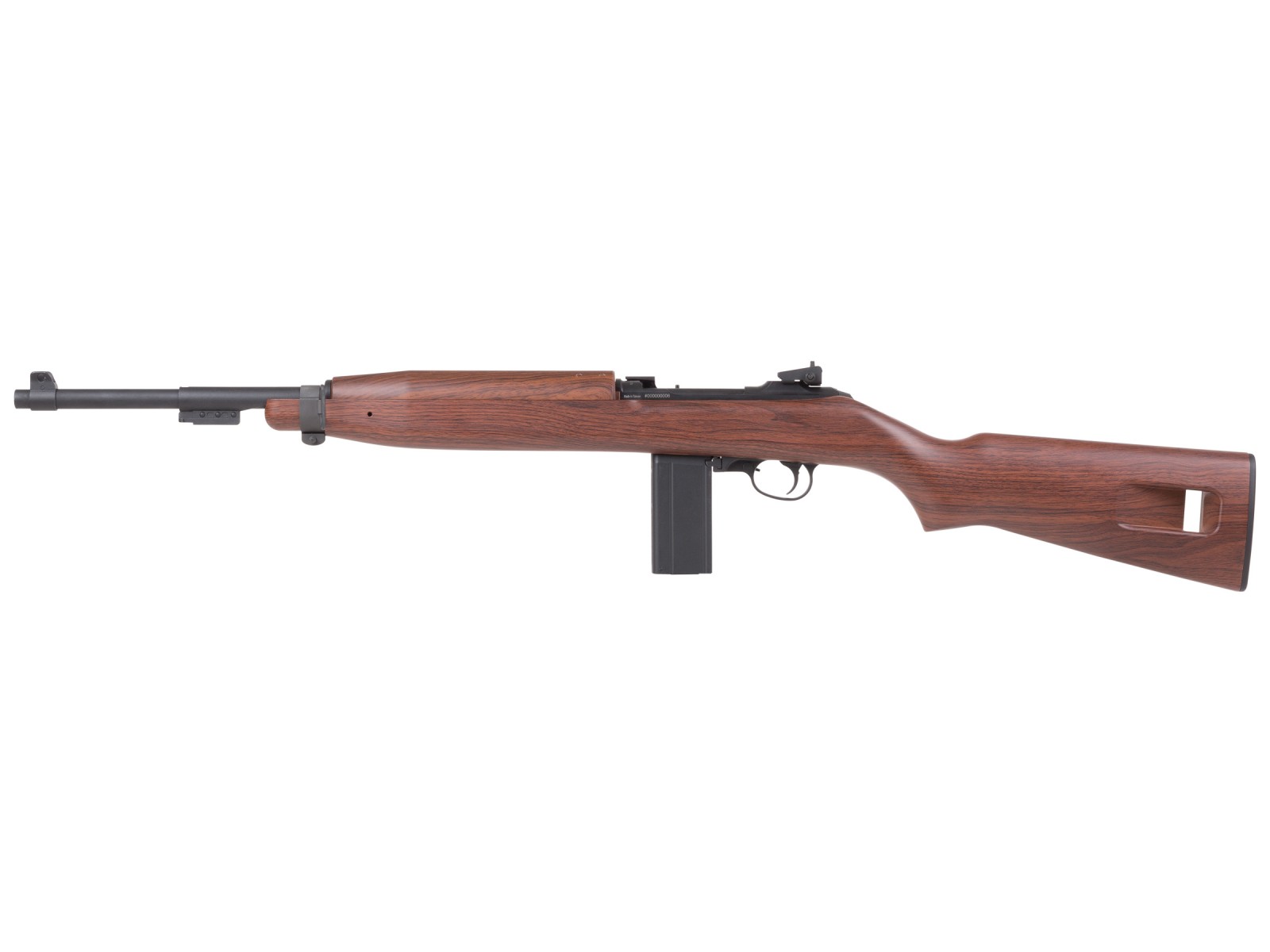 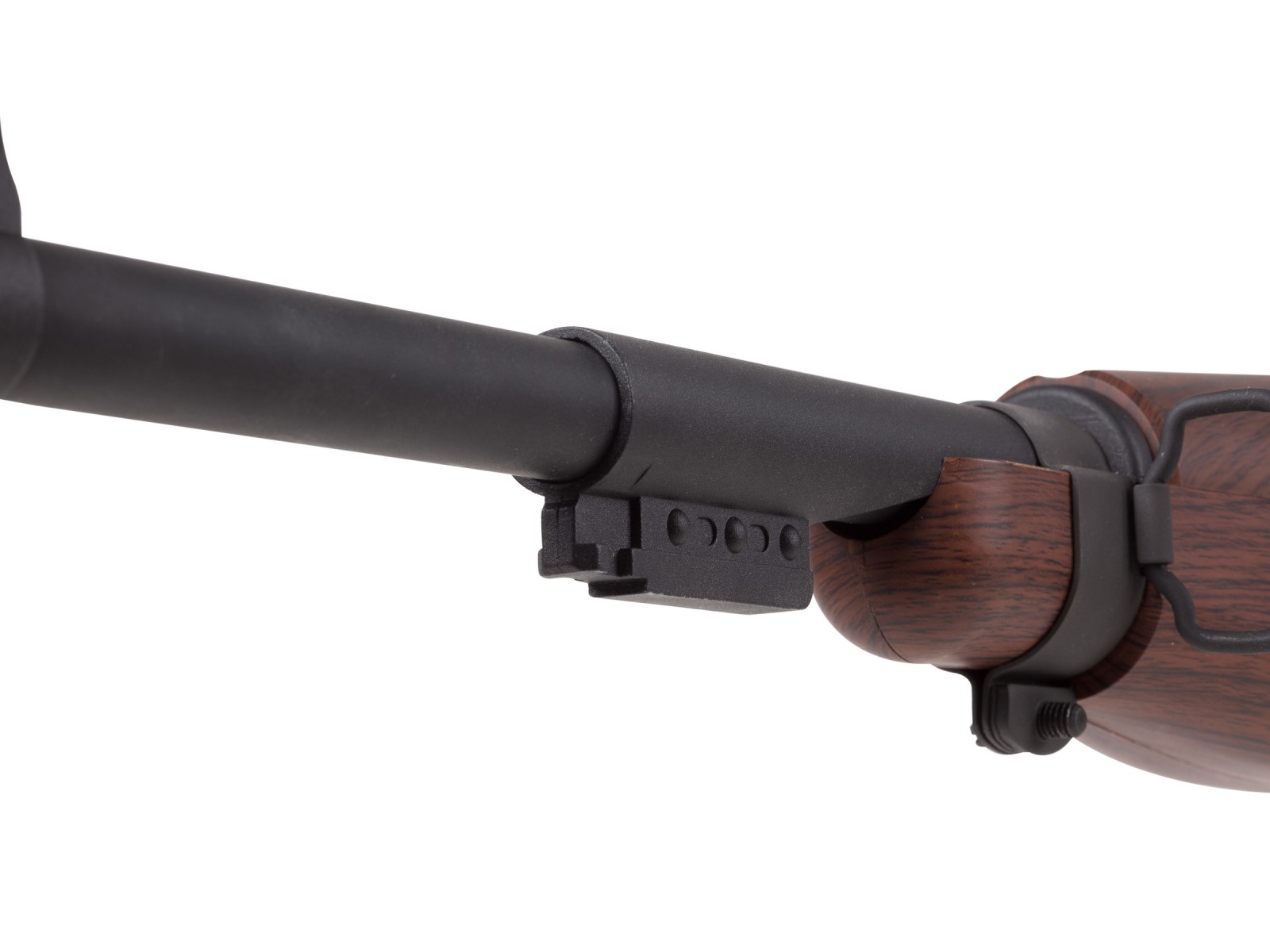 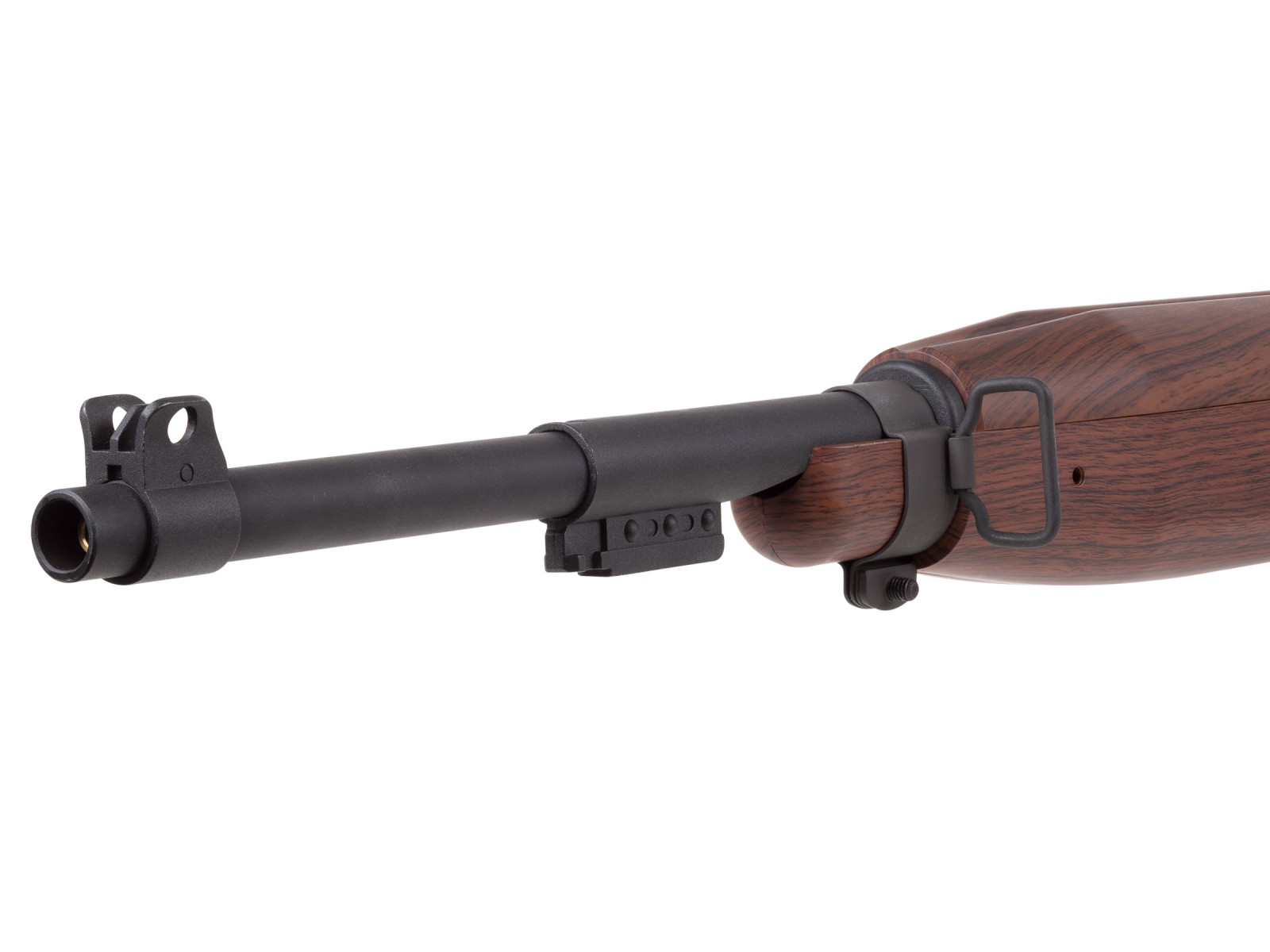 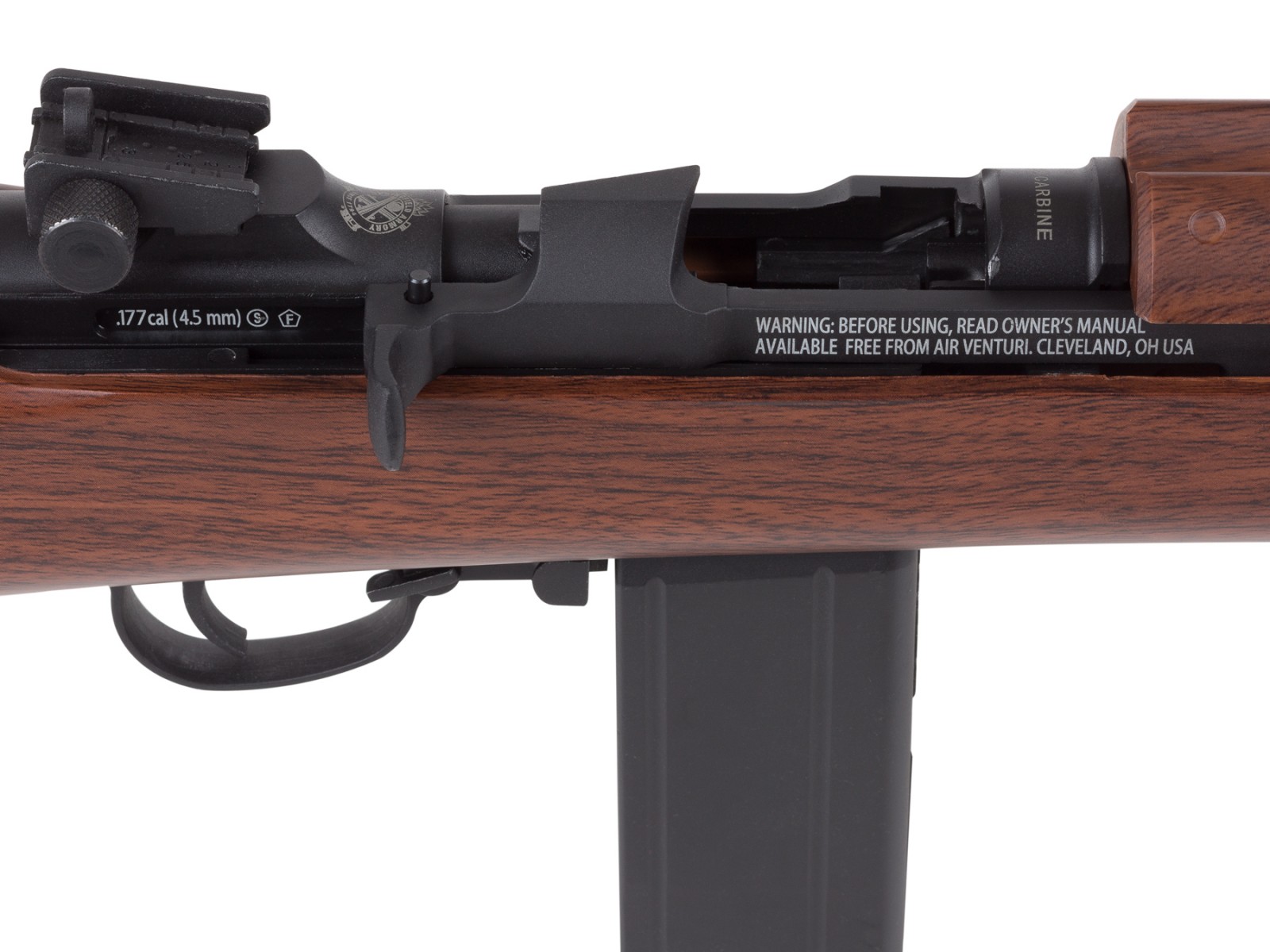 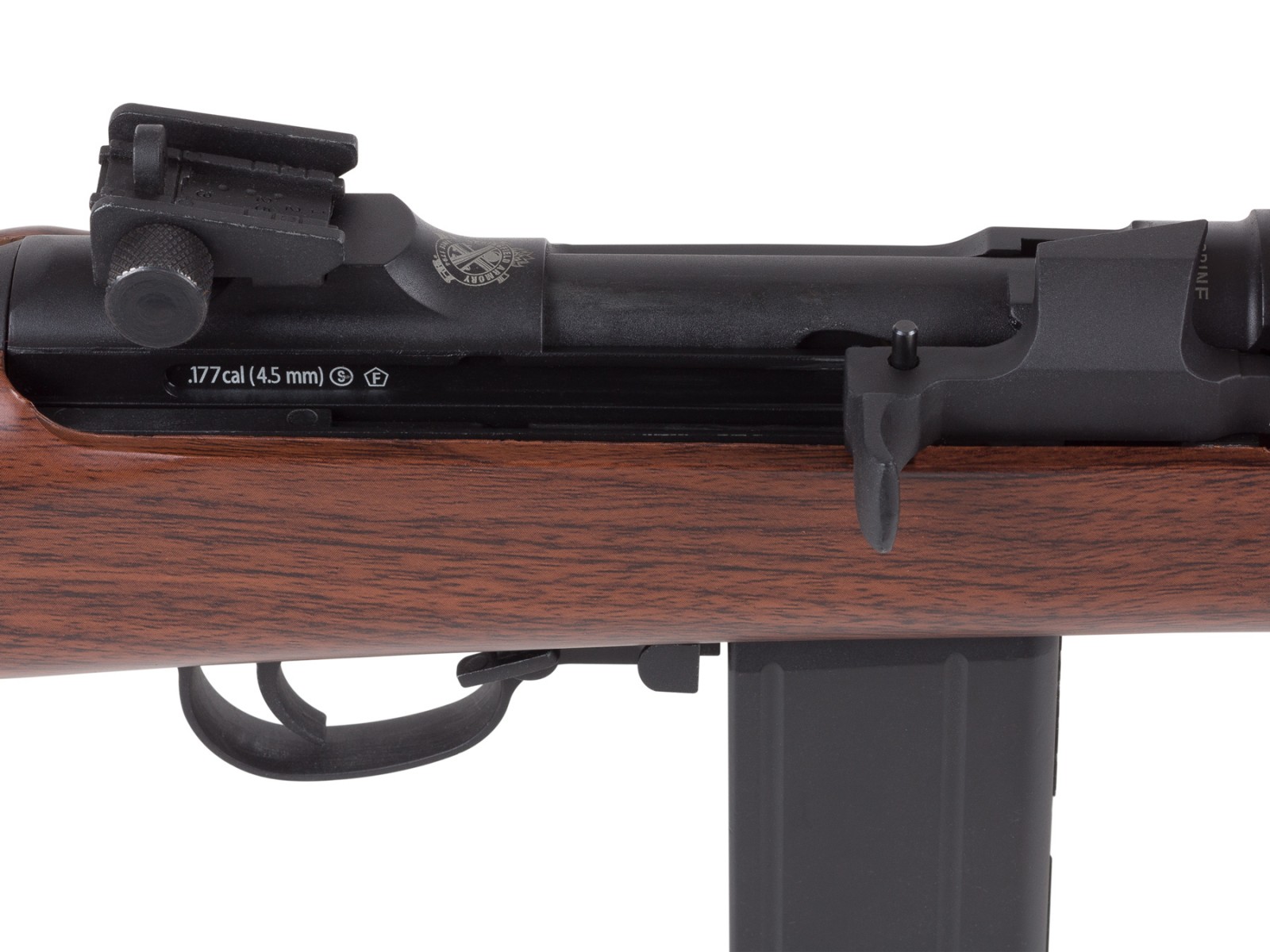 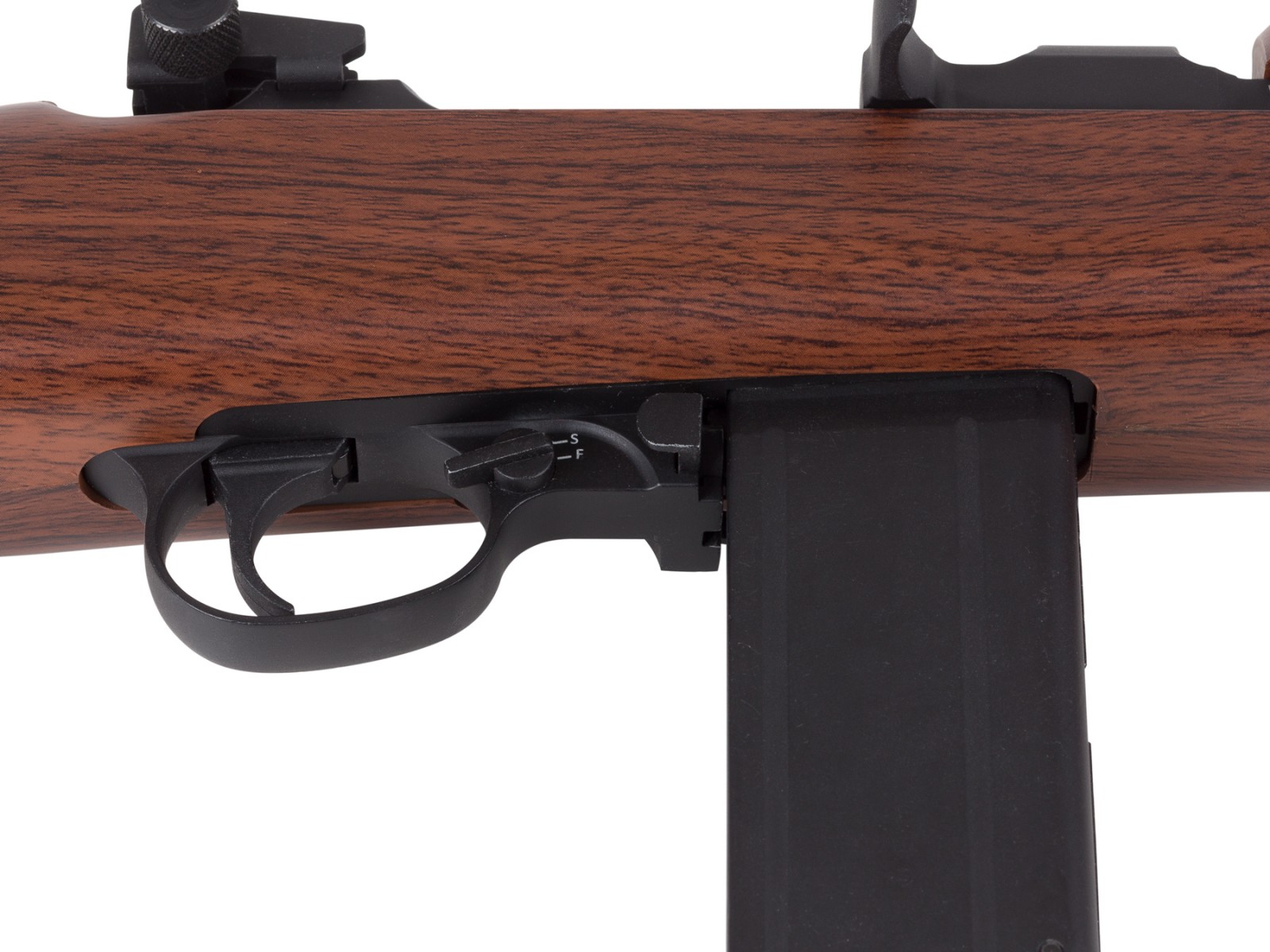 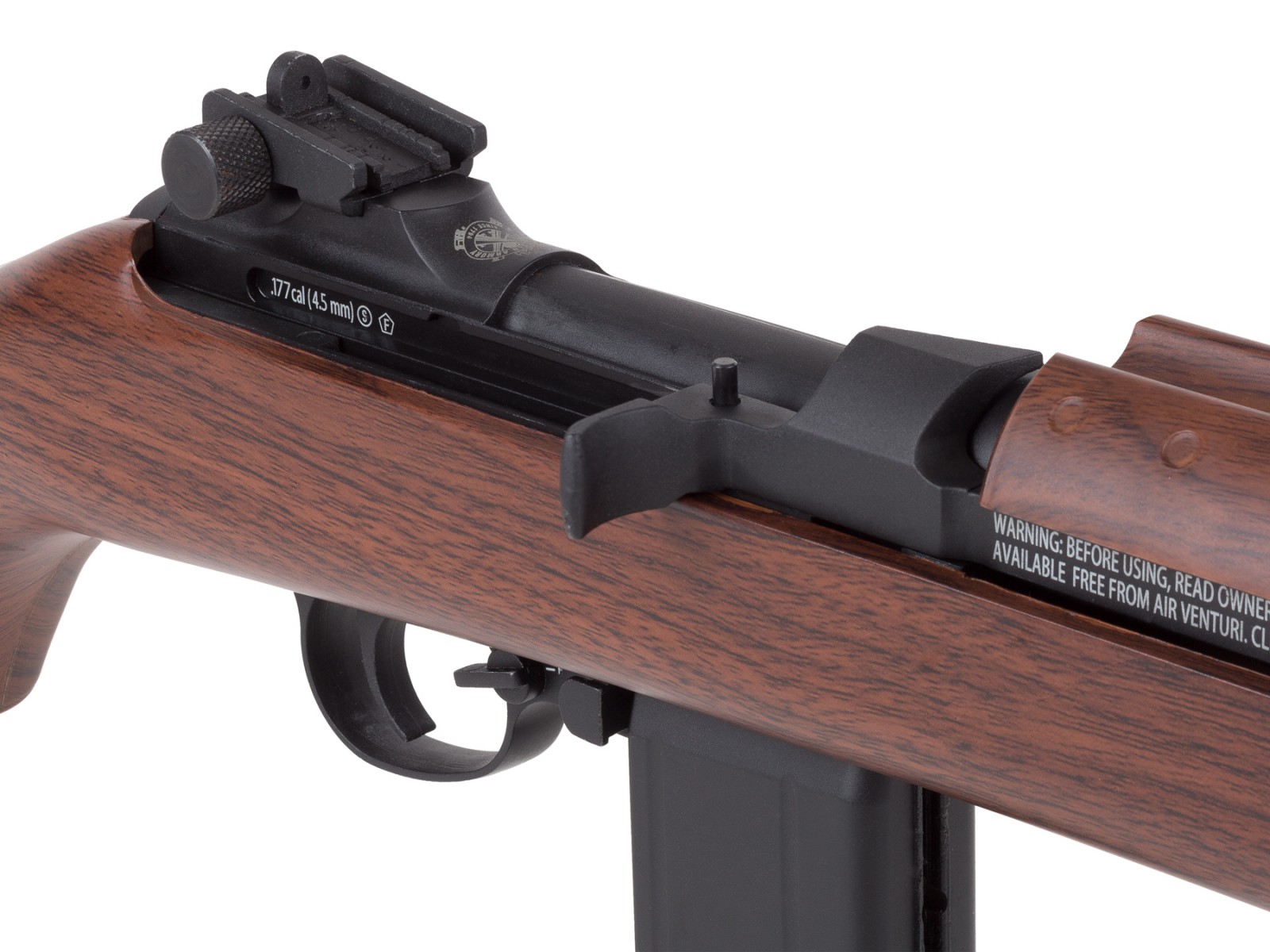 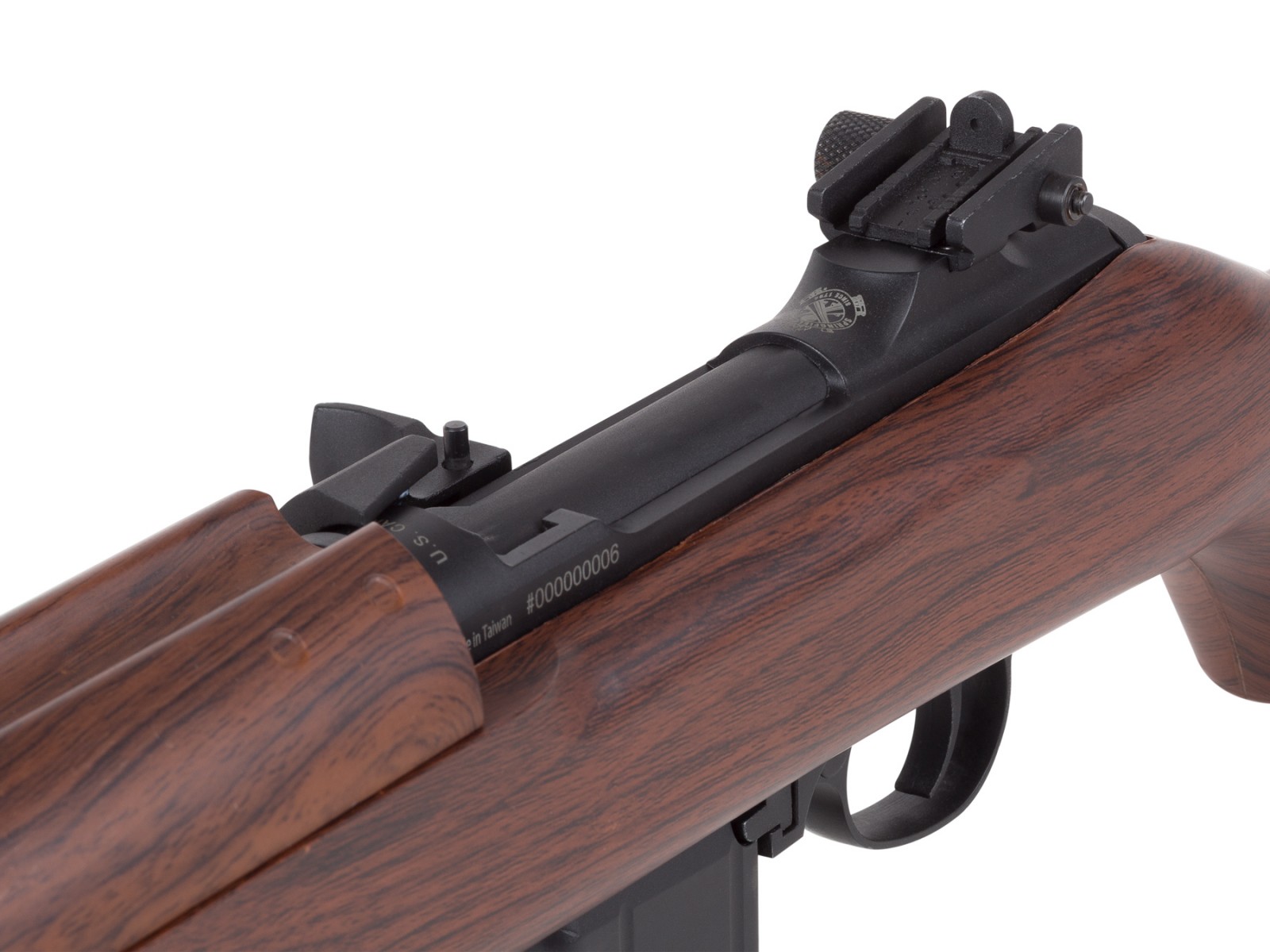 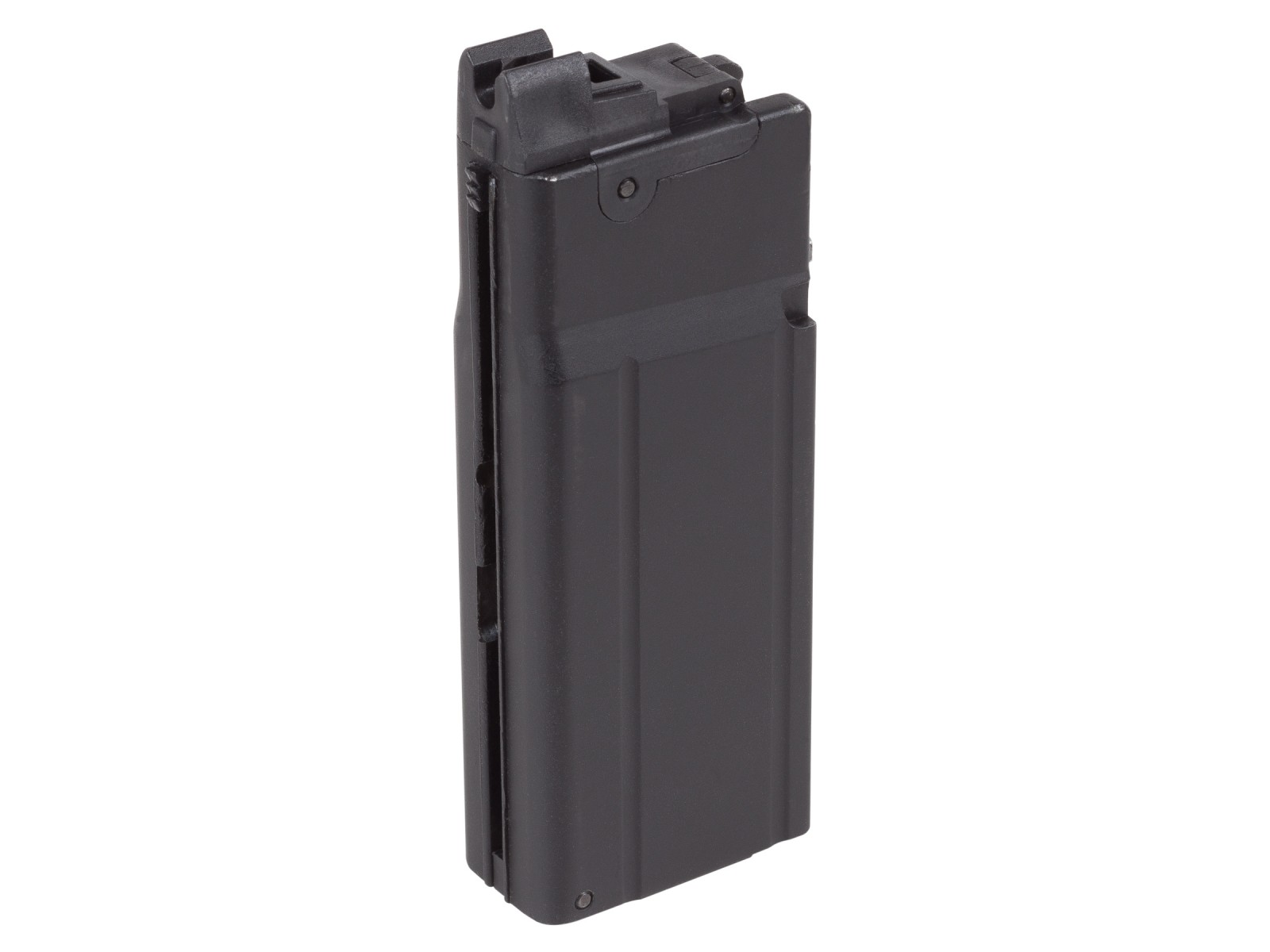 Aiding in that realism is a gas-powered recoil system that gives the user the most authentic shooting experience possible. With each pull of the crisp, two-stage trigger, you'll send steel BBs downrange at speeds of up to 425 fps. Operating off of a single 12-gram CO2 cartridge held in the 15 round drop-free magazine, you can expect 40 good shots from this replica rifle.

Whether you're a replica fan, history buff, or just enjoy a fun shooting experience, the M1 Carbine from Springfield Armory is a rifle that deserves a place in every airgunner's arsenal.

Ordered mine refurbished with the $10 pre-inspection, money well spent I think. A great reproduction and value. After a few hundred shots no problem with magazine or action.

Quite accurate out to 15-20 yards, though mine shoots high enough that I have to aim through the middle of the front post for consistent hits.

Darn good rifle! Accurate right out of the box, and it isn't made in China.

Thank you for your comment!
Where is it made???
Add comment to this review
July 5, 2022
By Gerald

The rifle. I have always been a fan of the M1 Carbine (the real thing), so I finally ordered the Springfield version, which came last weekend, and it does look like the real thing. I've had a Crosman version for years and well, it only has a vague appearance of the M1. I opted for the wood stock on this one; it just looks better. It is a walnut-stained softer hard wood, perhaps Alder, but looks good. Yes, the M1 bayonet does fit on this Springfield replica. The barrel mount was a bit thick and had to be filed a little. I used curved rifle files for the job then touched it up with a black permanent marker. BUT I have seen the real M1 rifle need the same adjustment.

#1. At least two good and tested magazines in the box, not just the one. And make sure they function! #2. Make the magazine follower out of metal, plastic does not seem to be up to the job. #3. Chamfer the BB loading port to make it easier to load.

My boys and I have already given it a good work out, the rifle has worked quite nicely. The Magazines, not so much. I ordered an extra one and they both stink. Both mags were unpackaged and placed on the bench so not sure which came with the rifle, and which was the extra. One leaked profusely with a pinched / torn O ring in the valve assembly and had to be replaced, the other had a broken follower and could not be loaded. (There are a lot of complaints about the follower.) I machined a new follower out of metal; why they use plastic for this part is beyond me. Loading the BBs was not easy, if they were not placed directly in the hole, they rolled away, so I chamfered the BB port about 45 deg which made it much easier to get the BBs in the loading port.