Today is the final test of the Sig ProForce MCX Virtus airsoft gun. So far we have tested the velocity and accuracy of 0.20-gram and heavier BBs with the 120 mainspring the gun came with. Then we swapped in the 110 mainspring that was also included and tested the gun all over again.

I shot outdoors at 10 meters. The gun was rested on a sandbag. The Romeo5 XDR dot sight is still zeroed from Part 4.

I started the test with the 0.20-gram BBs Sig sent with the gun. They don’t have a BB of their own, and I don’t know whose BBs these are. Ten went into 2.151-inches at 10 meters. The group is centered on the bullseye very well, but it is a little high. So I adjusted the dot sight down several clicks before shooting the next BB.

Now that I have a sound meter I tested the discharged noise of the gun. I put my phone 4 feet to the left of the muzzle and pointed the microphone at the muzzle. I write that as a note to myself for standardizing future sound testing. A shot registered 89.1 on the meter. The only comparison I can offer is the .22 CB cap I recorded last week. The phone was farther away for that test and not pointed at the muzzle, and the discharge registered 88.2 decibels. No doubt it would have been a lot louder if tested under the same conditions as the Virtus. 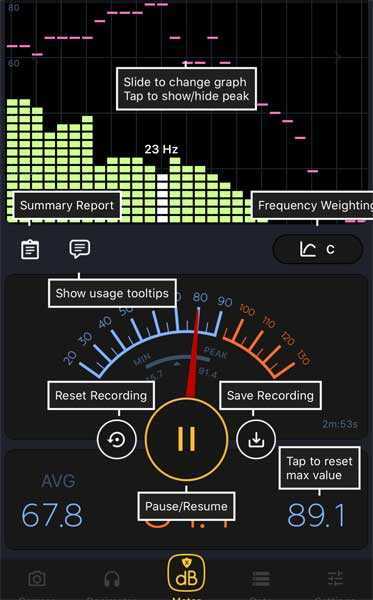 The Virtus registered 89.1 decibels Number on the lower right) on the sound meter.

Next I fired 10 TSD Tactical black 0.20-gram BBs. They grouped in 2.565-inches at 10 meters. They are lower on the target and centered very well but still a little high. After this group was completed I adjusted the Romeo5 down 3 more clicks.

Ten TSD black 0.20-gram BBs went into 2.151-inches at 10 meters. The group is well-centered but still a little high, so the sight was adjusted lower again. 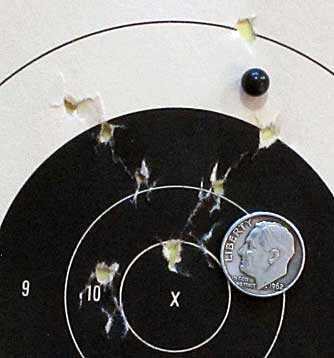 Ten black TSD Tactical BBs were more centered on the target but were not as tight as the Sig BBs.

Next up were TSD white tactical BBs. By this time in the test the sun was behind me and I could see each BB flying toward the target. They seemed to fly in an arc that peaked 3 to 5 inches above the bullseye. But when I collected the target I saw that the BBs had struck in the black or just above. One shot was off the target paper on the high side and the group measures 2.004-inches between centers at 10 meters. It’s the smallest group of the test. 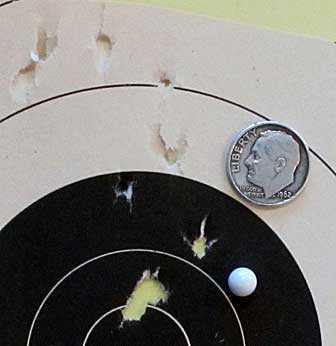 Well that is the complete test of the Sig ProForce MCX Virtus airsoft gun. Based on what we have seen the heavier BBs (0.28-gram and 0.30-gram) are the most accurate, but the 0.20-BBs are not bad, either. Maybe if I had adjusted the Hop-Up for each BB we would have seen something even better. The gun handles the 120 spring readily, though I like the 110 spring for the lower strain it puts on the gearbox. The trigger is great and there were no problems with feeding, once I learned how the magazine operated.

This is a serious gamer’s close quarter battle gun. It’s rugged, reliable, accurate and works exactly as it should. The battery has lasted for all testing on just a single charge.

The Romeo5 XDR dot sight was a real treat to use! It adjusts precisely and I like that 50,000-hour battery life for the ONE AAA battery this sight uses! I will be sad to see this one go home.