Walther’s LGV Challenger breakbarrel was a short-run success in 2013.

Today I test the velocity of the Walther LGV Challenger. This modern classic breakbarrel has a lot to recommend it, but it does shudder with mainspring vibration. I will see if I can fix that today and what it will cost in terms of performance.

Out comes the Tune in a Tube applicator. Mine was almost empty, so I refilled it from a 14-oz. cartridge of Almagard 3752 grease, which is what it is. But when the pistol was pushed the grease would not come out of the spout. The grease was migrating back around its internal piston and coming backwards, so it was clear this applicator was shot.

I used a cotton swab to spread the grease around the mainspring, but before we get to that I have some other things to tell you.

To grease the mainspring I had to remove the barreled action from the stock. When I did that I discovered two interesting things. First, there is a spring-loaded plate in the bottom of the stock to keep the articulated cocking link aligned. The end of the link passes through the cocking slot to connect with the piston, but it isn’t retained inside  the spring tube.

The spring-loaded plate inside the stock channel keeps the two-piece cocking link aligned. 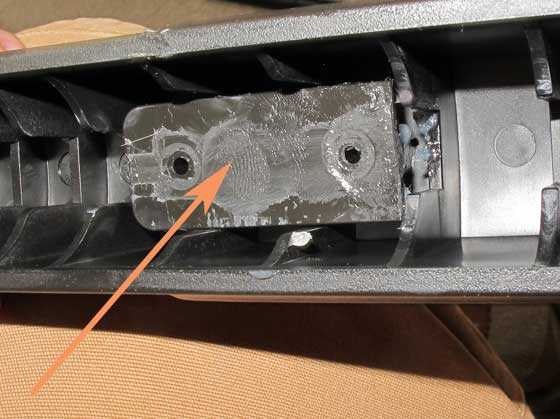 The spring-loaded plate (arrow) holds the cocking link against the piston.

The factory greased the mainspring with moly. That was the last thing I expected to see in this powerplant. Moly does nothing to dampen vibration and should only be used for friction reduction. It isn’t correct for this powerplant that has some looseness.

Moly grease does nothing to dampen vibration. It is incorrect for this application.

As I said I used a cotton swab to apply some TIAT to the mainspring. Then I assembled the rifle and test-fired it. It was better but still not what I wanted. So out of the stock came the barreled action once more and I put in more TIAT. This time I was successful.

What I see in the string is the velocity is increasing the more the rifle is shot. It may not return to 664 f.p.s. with Hobbys but an average of 650 might be possible.

In 2013 it took 33 lbs.  to cock the LGV. Today it takes 32. That’s too close to call. I’d like to add that the barrel lock means you don’t have to slap the muzzle to break the barrel down for cocking.

The rifle is relatively calm now. It isn’t the best I have shot but it’s ahead of where it was. It should feel good when I shoot for accuracy.

As far as I’m concerned, the LGV Challenger hasn’t changed that much since I last tested it. Therefore I plan to bypass the 10 meter test and go straight to 25 yards