A week later he called and said he had shot it at a box 150 feet away and didn’t hit it. So I walked him through the 10-foot sight-in. He did it and called back — the gun shot 2-inches high at 10 feet — not two inches low like I said it would. Oh, oh!

To cut to the chase he had to shim under the front ring instead. When he did that he was on target at 10 feet again. And also at 30 feet — so I know his gun will be good.

Why did it shoot high?

If you are following this you already know why his Gamo shot high at 10-feet. Gamos don’t normally do that. Almost no spring rifles do. They almost always droop, which means to shoot low. Why is this one shooting high? Unless the bore is drilled off-center there is only one real cause for that — the barrel is bent upward. How did that happen? Either the trigger was pulled with the gun broken open or someone let go of the barrel before the gun was cocked. That results in a bent barrel every time. I’m not 100 percent certain of that, but at this time it’s another good guess.

When a breakbarrel is closed too fast, the barrel bends up like this.

What can be done?

If the upward bend is not too severe you can compensate for it by shimming the front ring of the scope mount. My friend has done this and says it’s okay. You can also bend the barrel straight again. I described how to do this and showed the results in a 5-part report.

I hope to hear more about this rifle from my friend. If I do I will tell you what I learn.

Today we are going to finish mounting the scope on our rifle. In Part 1 we got it on the rifle and slanted down, which works for about 90 percent of all breakbarrels. The one-piece scope rings were properly anchored to the Gamo’s scope base, so the mount should remain where we put it.

I positioned the scope as far to the rear as possible, because that was a complaint my friend had with his old scope — the one that came mounted on the rifle from the factory. The eyepiece of that scope was mounted so far forward that the image my friend saw wasn’t the full-sized image the scope was capable of producing. It bugged him so much that he stopped shooting his rifle. When I showed him my ASP20 breakbarrel with the scope properly mounted he saw the difference right away.

Most variable scopes you buy today have an eye-relief of 2.5 to 2.75-inches. You don’t measure this with a ruler. You mount the rifle to your shoulder until it is comfortable and then slide the scope back and forth in the loose rings until the image seen is ideal. There were some comments in Part 1 that my eye relief and my friend’s are probably not the same. That may be true but there is some tolerance either way for small differences. So I positioned the scope as far to the rear as it would go. It worked for me and I have since learned that it also works for him.

Along with many others I used to jump through many hoops to “level” my scopes. I put quotes around the word level because there is no such thing. Leveling a scope is impossible — it can’t be done! Because what are you leveling it with? The receiver? And how do you level that?

I have explained this hundreds of times and some people never seem to catch on to what I’m saying. Let me ask you this — can you level a ball bearing? Some may think I’m asking if a ball bearing can be placed on a level surface so it doesn’t roll in any direction, but that’s not what I am asking. I’m asking if you can level the ball bearing itself.

It doesn’t make any sense when you think about it that way, does it? Of course not! A spherical object like a ball bearing has no relationship with the concept of being level. You can level a foundation. You can level a driveway. You can level a recreational vehicle. But you can’t level a scope — to a rifle.

Besides — level isn’t what you want. What you want is for the scope to look right to you when you mount the rifle to your shoulder to fire. For that to happen, only one thing is required. The vertical crosshair of the scope must appear to bisect the center of the rifle when you look through it. 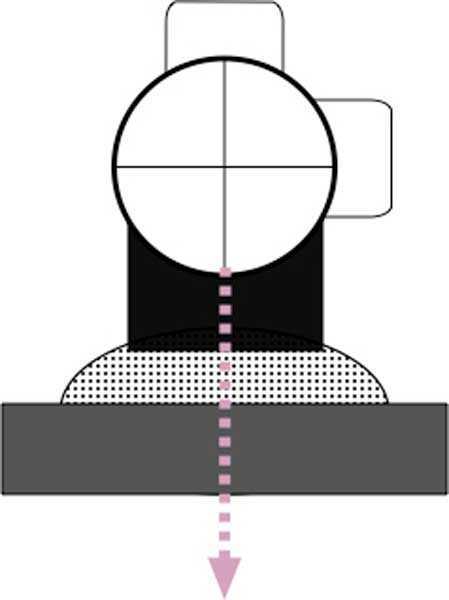 Align the scope (rotate it in the rings) until the vertical reticle seems to bisect the rifle when you look through it.

When someone else does this you may find that the scope doesn’t look level to you. That’s because you don’t hold your head against the stock on the same angle as the other person. This is another reason that it is impossible to level a scope — because it depends on how you look through it, and each person is different.

Not you can’t —YOU cant — as in you tilt! Most people only cant (their heads) slightly when they shoulder a rifle, but some are very pronounced. How much you tilt your head when you shoulder a rifle determines whether the scope looks level to you.

I could have told you to hang a plumb bob at 50 yards and cover the line with the vertical reticle. I used to do that. Since the line is completely vertical I knew the scope had to be “level”. Ah, yes, but what about the rifle underneath? How do I level it? Well, with any luck the bottom of the forearm just in front of the trigger guard was flat and, when laid on a flat and level surface, it agreed with the scope aligned over a plumb line.

So far I have only been referring to spring-piston rifles. With other powerplants we encounter different challenges. Both the precharged and CO2 powerplants share the same things, because the principal feature they offer is repeatability. That brings in additional scope clearance issues.

This Air Arms S510 illustrates the problem of scoping a repeater very well. The scope has to clear the rotary magazine that can be seen sticking up above the flat receiver. The dimensions of the scope put its turret exactly over the magazine. This forces two things — high scope rings and two-piece scope rings.

The good news is that, except for big bore airguns, PCPs and CO2 guns have no real recoil. So all the work we did in Part One to anchor the scope rings to the rifle is not necessary.

Next we eliminate cant. That is a subject of its own and one that deserves its own report.