It took nine shots to sight in the rifle. It was initially shooting low and to the left so I had to bring it up several inches and also about an inch to the right. The manual shows using a center hold on your target which is appropriate for shooting at personnel with a military rifle. This is a pellet version of a battle rifle after all. But for shooting at bullseye targets a 6 o’clock hold is far more precise. So that’s what I did.

The first pellet I tested was the 18.3-grain JSB Exact Jumbo Heavy. Five went into 0.417-inches at 10 meters. Not too shabby!

The second pellet to be tested was the Air Arms Diabolo Field Heavy. Although it looks like the JSB I just shot and weighs pretty close to the same, this pellet usually performs much differently. And it did this time. The first shot of five went just to the right of center and below the 10-ring, but the succeeding four went into a 0.206-inch group to the left of that. All five shots are in a 0.469-inch group.

Although this group is larger than the first one, those last four shots convinced me that this pellet is more accurate than the JSB. 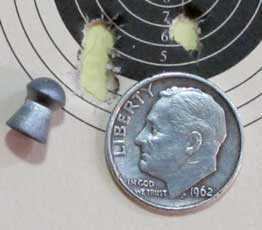 The third pellet I tried was the RWS Hobby wadcutter. Although I didn’t adjust the sights, these pellets landed almost one inch higher on target at 10 meters. Five Hobbys went into 0.414-inches at 10 meters. And that result leads me to state something that should be obvious by this time. 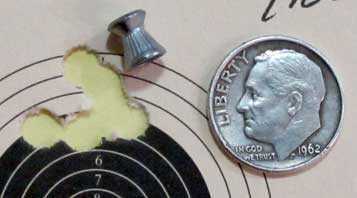 Accuracy with all pellets

The thing you should have noticed it that all these pellets are giving similar results. The M1A is accurate and it seems not to matter much which pellet is used. Let’s look at one more pellet before we move on.

The last pellet I will test is the 18-grain Sniper Magnum dome from H&N. It went to almost the same place as the other two 18-grain pellets and five of these landed in a group that measures 0.469-inches between centers. You see? All four of these pellets are performing about the same. This M1A is both accurate and consistent. 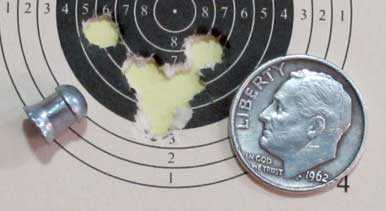 I was hoping the M1A would be accurate, and it is. Even though it is a replica battle rifle, it is also a tremendous value in a spring-piston pellet rifle. Yes the shooter will have to accept the envelope of the M14 rifle, but hidden inside is the best springer value on the market!

But there is more to test today. I selected the pellet I thought to be the most accurate and shot ten of them at another target.

This time I adjusted the rear peep up three clicks and shot 10 Air Arms Diabolo Field Heavy domes. They went into 0.741-inches at 10 meters. 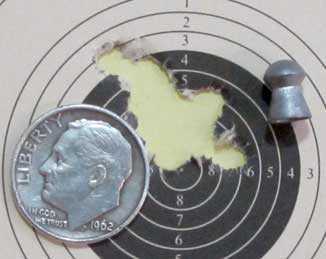 I told you in Part 3 that I was going to do this, and, given the results, I’m glad I did. Boxing the target means adjusting the rear sight in a precise way to see whether it moves the groups by the same amount every time.

Boxing the target means shooting five groups. By adjusting the rear sight after each group, you make 4 groups in a square or box pattern. You walk the groups around the corners of a box. The last group lands on top of the first. 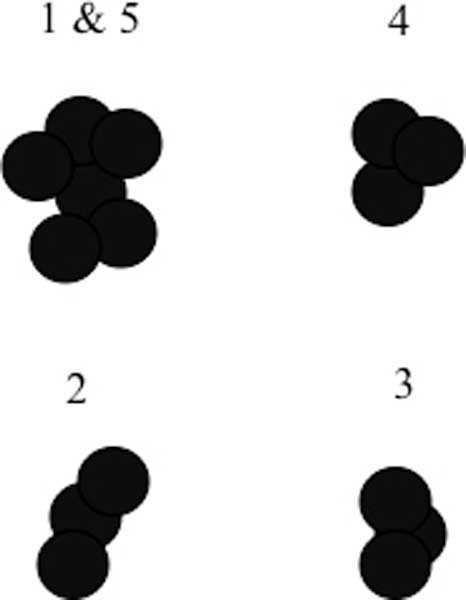 This is how a target should look if the rear sight adjusts perfectly every time when the target is boxed.

The first time I tried to box the target with the M1A the elevation worked fine but the windage adjustment didn’t. It was apparently adjusted as far to the right as it would go. What I got was two groups, one high and the other low.

On the second try I moved the windage adjustment to the left and I got success on the lower groups but not on the high ones. Here is what the target looked like. These are three-shot groups, but the higher group has three times three shots. 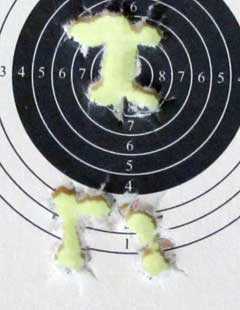 The M1A sight adjusted well when the rear sight was lowered but when it was set high the groups printed together. There are 9 pellets in the top group.

What does this mean? It means the rear peep on this M1A pellet rifle isn’t as precise when the sight goes too high or too far to the right. The sight does adjust — just not with the precision of other peep sights when you get to the end of its adjustment range. It’s not a fatal flaw but it is one to bear in mind.

The M1A is accurate — today’s test demonstrates that. The peep sight becomes less precise when it gets near its limits of elevation or right adjustment.

So far the M1A shows good power, good accuracy and a nice, useable trigger. The next step will be to mount an optical sight on the scope base and see what happens.

The Bronco from Air Venturi – Part 2