Boy! Have I got one for you today! I don’t know who this test speaks to, but someone out there in Blog Readerland needs to hear this.

Today we test the Mondial Oklahoma air pistol for accuracy. And Lucy — I got some ‘splainin’ to do!

I’ll begin with a quote from  Part 2, “I don’t have very high hopes for this pistol to be accurate. The inexpensive construction plus the smooth barrel are two reasons why. I think I will start my accuracy test at 20 feet, rather than 10 meters.” Ha, ha. Famous last words.

Whenever I test an airgun that I think may not be accurate, I always get close to the target trap. That’s just common sense, but as my late Aunt Linda once told me, “Common sense isn’t very common anymore.”

The Oklahoma is a smoothbore, and after my recent experience with the Daisy 35 I was full of trepedation. So I started at 15 feet and rested my shooting arm on a cat tower. I shot an H&N R10 Match Pistol pellet and used a 6 o’clock hold on the bull. I seated the pellet deep in the bore so it would come out faster. We learned in Part 2 that deep-seating increases the velocity of this gentle air pistol dramatically.

So I went up to 5 feet from the trap and shot freehand. Oh, the things I do for you!

I also wondered whether seating pellets deep was a problem. So from this point on, until I say otherwise, I seated all pellets flush with the breech.

With a 6 o’clock hold I put a H&N R10 Match Pistol pellet about an inch above the bullseye. Okay, so she’s shooting high. Way, way, way too high!

So I took careful aim at the number 3 below the bull and shot again freehand. The shot hit near the center of the bull, so I did the same thing again four more times and got a 5-shot group that measures 0.269-inches between centers. Who sez old BB Pelletier can’t shoot! At five feet I am probably the world champeen! 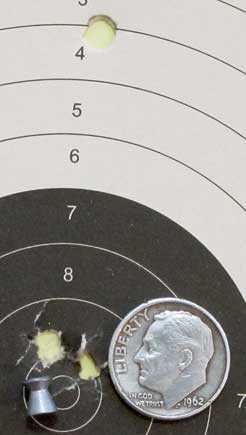 The hole at the top was shot with a 6 o’clock hold. The five pellets in the center were with a hold on the number 3 on the target paper, 1.1-inches below the bull. This 5-shot group measures 0.269-inches between centers. Shot freehand at 5 feet.

Now I was rollin’! So I backed up to 8 feet and shot a second group of R10 Match Pistol pellets freehand. A hold on the number 3 put the first pellet an inch above the bull, so I took careful aim at the bottom of the paper target and tried to stay centered on the bull. This time 5 pellets went into 1.248-inches and were still nicely centered, left and right. 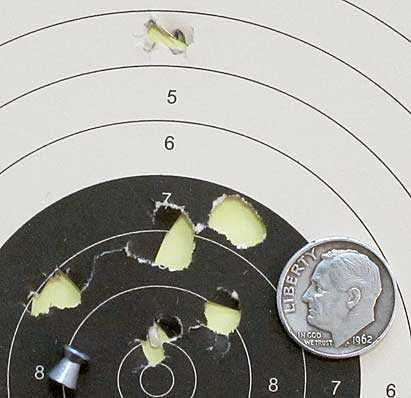 At 8 feet and with a lower aim point, I was able to put 5 R10 Match Pistol pellets into a group that measures 1.248-inches between centers.  The high shot was shot with a hold on the number 3 below the bull and isn’t part of the group. This was also shot freehand.

Okay, I know I am risking everything by shooting from as far back as 15 feet. My bedroom walls already have three new pellet holes from this test! I drew a round aim point on the cardboard backer about three inches below the target paper. This time I shot with my hands rested on a sandbag because — well, guys — this was clear back at 15 feet! 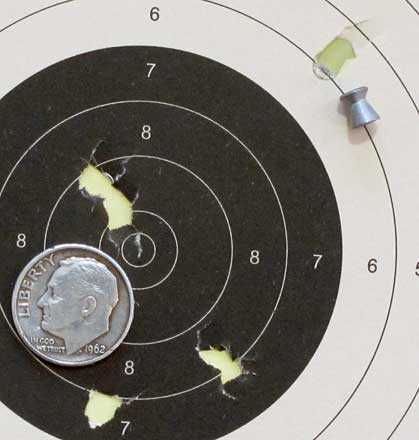 At 15 feet and shot from a rested hold the Oklahoma put 5 R10 Match Pistol pellets into a 2.232-inch group.

Now that I had the pistol hitting the target at 15 feet I tried 5 Air Arms Falcon domes that were also seated flush with the breech. They seated a little easier than the previous R10s. 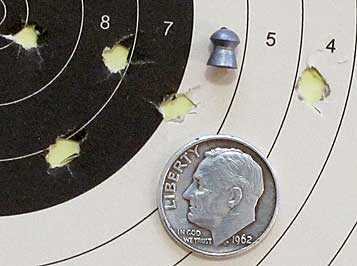 The Oklahoma put 5 Air Arms Falcons into a 1.623-inch group at 15 feet when shot with a rested hold.

The last pellet I tried was the Norma S-Target Match wadcutter that I introduced to you last week. I tried this pellet because of its small head. I felt it would fit the bore of the pistol better and perhaps go faster. Well, they did load a lot easier. And they did hit a bit lower which indicates they went out a little faster. But the group of five measures 2.823-inches between centers, which is the largest group of the test. 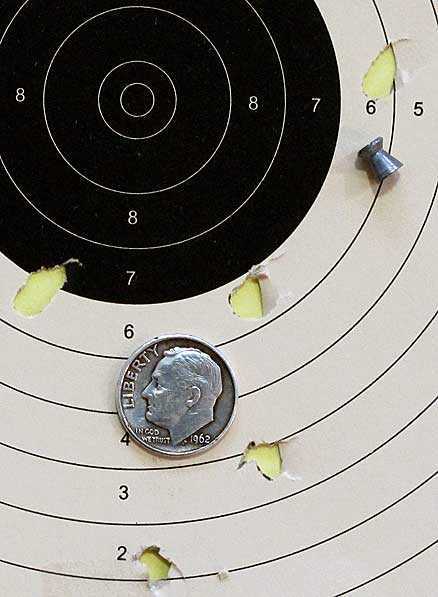 You read this blog to learn stuff, to correct my spelling mistakes and sometimes to experience strange things that shouldn’t be true, but are. Well, I have one for you today. I had been paying attention to everything that was happening and something occurred to me. Without a doubt the R10 Match Pistol pellet was the best that I tested in the Oklahoma today. And, when I held it well, the Oklahoma pistol wanted to put this pellet in the center of the bullseye.

What if I deep-seated the R10 pellet again? Now that I knew where to aim would that make the pellet go to the right place? Only one way to find out.

For the next group I deep-seated each pellet with a ballpoint pen. I held the gun the same way as I did for the other rested targets and this was the last target of the day — when I usually get tired from shooting. This time, though, pellet after pellet went to almost the same place. Five R10 Match Pistol pellets grouped in 0.699-inches at 15 feet. Boy — was I surprised! 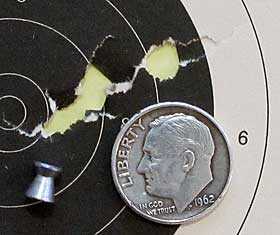 Take that, Daisy 35! Apparently the world isn’t finished with B.B. Pelletier just yet!