Today is the big day— the day we see just how accurate a Daisy Champion 499B target BB gun really is. I think many of you will be surprised.

I’m shooting off a UTG Monopod rest except for the final target. I’m shooting at 5 meters which is 16 feet 4 inches — the international BB gun shooting distance. I’m shooting 5-shot groups for a reason that I trust will become apparent at the end of the report.

The 499B I’m shooting is the new one I bought for the Royal Ranger training. With it came an owner’s manual that I hadn’t read in 20 years, and I learned something important — how to cock and load the gun. You’ll also remember that this one is about 20 f.p.s. faster than my old 499B.

I will shoot three different BBs today. tThe 499B is made for only one specific BB — Daisy’s Avanti Match Grade Precision Ground Shot. When Daisy made those BBs in this country they were called No. 515 Precision Ground Shot, so in my past reviews that’s what I called them. They are now imported from China, though the precision hasn’t diminished one iota.

I wore my reading glasses to see the front sight insert clearly. At 5 meters the bullseye is clear. too.

First I have to sight in the gun. Now, coaches tell me that the Daisy 5899 target peep sight that now comes standard on the 499B is a great sight, except for one thing. When you adjust it, it doesn’t always go as far as you adjust. And, if you change directions, you have to adjust three clicks in the new direction to remove all the slack from the mechanism.

The first two shots landed about an inch high and to the left of the bull. I adjusted the sight 8 clicks right and 6 clicks down.

The next shot hit where the first two had, though it was lower and to the right of both of them. I adjusted another 8 clicks right and 8 clicks down.

The next two shots are above and slightly to the left of the bull. I then adjusted 14 clicks right and 8 clicks down.

The last two sighters are in the bull at 9 o’clock and level with the center — more or less. I adjusted 2 clicks down and 5 clicks to the right and then shot a group of five. 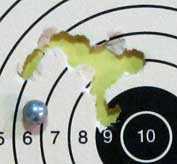 I walked the BBs into the bull in 7 shots.

This time I knew I was in the black, so I shot 5 shots. They all landed on the left side of the 10-ring in a group that measures 0.277-inches between centers. 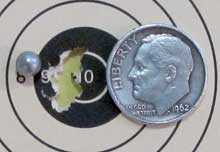 The first group is five 10s just a smidgeon to the left of center.

I adjusted three more clicks to the right before shooting this second group of Precision Ground Shot. This time the shots were more centered and 4 of 5 were 10s. This group measures 0.362-inches between centers. 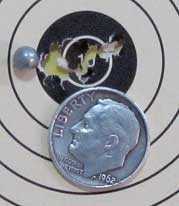 In the second group five Precision Ground Shot went into 0.362-inches. The group is well-centered.

The rifle is now sighted in for the Royal Rangers. I will not adjust the sights further. Now let’s try some different BBs.

The next BB I tried was the Crosman Black Widow that has proven to be a top BB among the premium brands. Naturally I did not adjust the sights for them. Five of them landed in a group measuring 0.698-inches between centers. It’s centered on the bull fairly well.

I will say that they dropped down the barrel about twice as fast as the Avanti Precision Shot. That’s all it takes to lose accuracy in this BB gun. 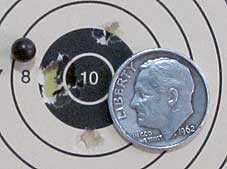 Reader Roamin Greco asked me to try Dust Devil Frangible BBs in the 499. I said I would, but I don’t know why he wants me to. Shooting Dust Devils that are smaller than most BBs in a target gun is like golfing with a square ball. I hope he will tell us why he wanted to see them tested in this gun.

Now, some readers were concerned they would harm the bore of the gun. Well, they won’t. At least not five for a one-time group. They are much smaller than the bore of the 499B. I don’t recommend shooting anything but Avanti Match Grade Precision Ground Shot in the 499B. And RidgeRunner, yes your Daisy 99 is accurate. So is mine. But they don’t hold a candle to this gun! 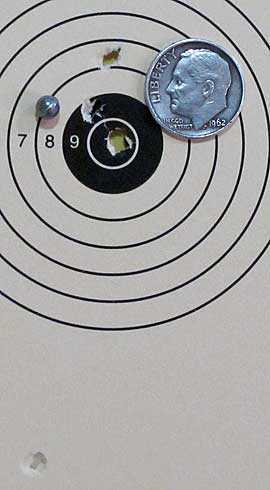 How far did the sight move?

I took a picture of the horizontal scale in case someone starts turning the knobs on the sight before I can stop them. As you can see, it moved far to the right to get centered on the bull. 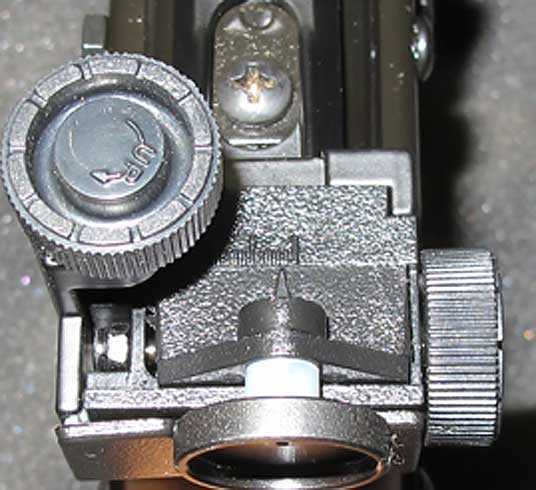 You can see how far to the right the sight was adjusted to center the group.I know that it appears that the sight moved to the left, but the arrow is what moved, while the scale remained in place.

The last target is one I had to shoot because this coming Saturday I’m going to teach a bunch of young boys and girls how to shoot. So, I wondered whether I could still do it myself.

I shot 5 shots with the 499 offhand (unsupported in any way) at 5 meters, and I used the correct Precision Ground Shot. Five shots went into 0.443-inches at 5 meters — a group I will happily accept. Yep — when he has to, old BB can still shoot! 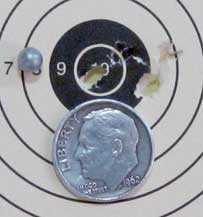 Getting this new 499B ready for the Royal Rangers has been fun. I hope this series has shown those who don’t know the gun just how accurate it is.