Today we adjust the Gauntlet 2 trigger. I said I would also test the shot count of the rifle from 3000 psi today but something prevented that.

Step one — disassemble the rifle! No, It’s not quite as bad as that, but almost. To adjust the Gauntlet trigger the barreled action has to come out of the receiver. For that to happen the …

Let’s just get on with it and I’ll describe the process, start to finish. Step one is to remove the magazine and check the barrel for obstructions, because if there is a pellet stuck in the barrel it will be shot out in step two.

In step two you have to let out all the air from the reservoir. Therefore, it’s best to wait until the gun needs to be filled to adjust the trigger. The test rifle was ready to be filled so I lucked out.

To degas you use the degasing tool that comes with the rifle.

The degas tool comes with the rifle. Insert it into the hole on the left side of the stock.

Once the tool is inserted turn it clockwise until you encounter resistance. Then turn it just a bit more and you’ll hear air hiss out the muzzle. If there are any obstructions in the barrel they will be shot out by this air. A word of caution — this tool does not fit in the gun precisely. All it’s doing is levering open a valve against air pressure, so it may work best on a slant. 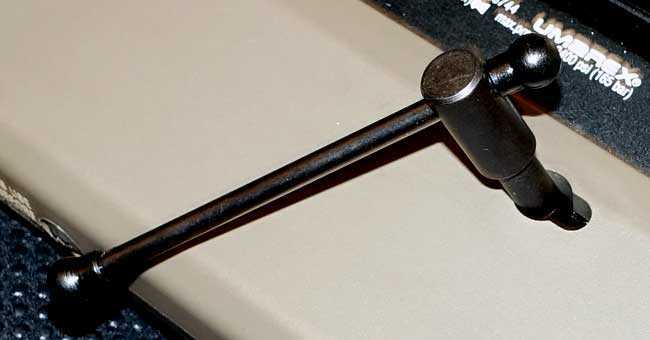 The degas tool is engaged with the valve and ready to open it. I noticed that the tool seemed to want to work on a slant like this.

All the air in the reservoir has to be exhausted, so be prepared. It takes a while. After all the air is out, cock and fire the rifle to remove any residual air that’s trapped inside the action. There wasn’t any in the test rifle.

Now remove the short forearm so the air tank can come out. There are three 2mm screws holding the forearm on the rest of the stock. 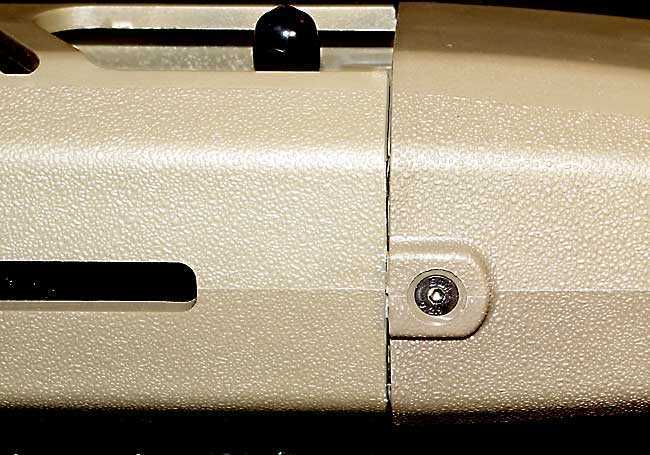 One screw is on the bottom of the forearm. 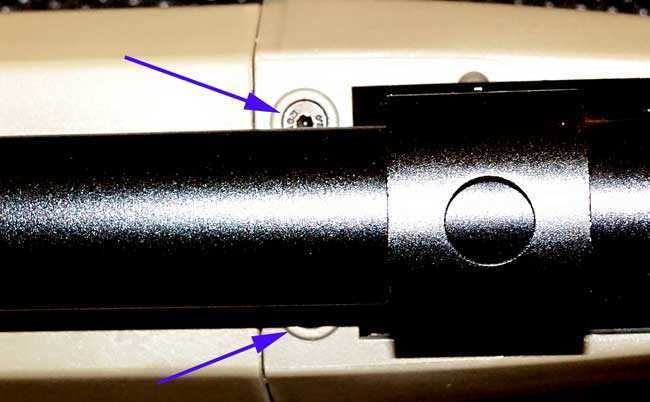 There are two forearm screws on the top of the gun, underneath the barrel shroud (arrows).

The photographs in the manual that tell you how to do this are small and difficult to see. And, in some of the photos, there are red arrows on a black background, which will not be visible to 14 percent of all males because of colorblindness. I found that using a magnifier on my smart phone was the way to both see the pictures and also read the very fine print.

In a case like this line drawings are better than dark pictures and yellow arrows instead of red would be easier to see against a dark background.

Once the three screws are out, the forearm slides off the rifle easily.

The forearm is off the rifle. Now the air reservoir can be unscrewed.

Remove the air reservoir by unscrewing it. I found the one on the test rifle was dry and sticking, so when I assembled it again I lubricated the o-rings and the sealing joint of the rifle action with silicone o-ring seal. Silicone chamber oil works, as well. The manual tells you to do this. 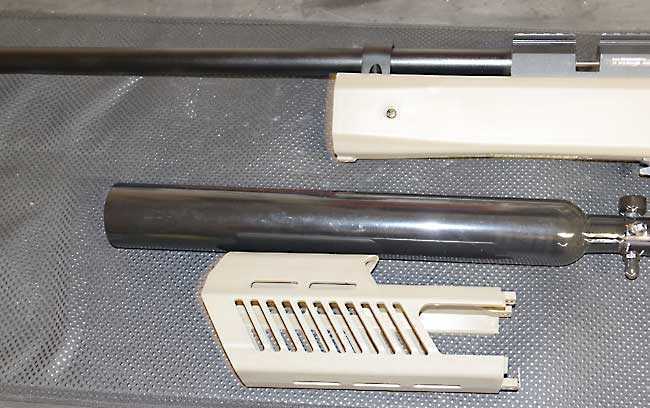 The air reservoir has been removed. Now the action can come out of the stock.

Until you remove the bottom stock screw the action won’t come out of the stock. The manual doesn’t mention this screw.

Now, you rotate the safety lever straight up and down to clear the stock and gently separate the action. The trigger is now exposed and can now be adjusted. 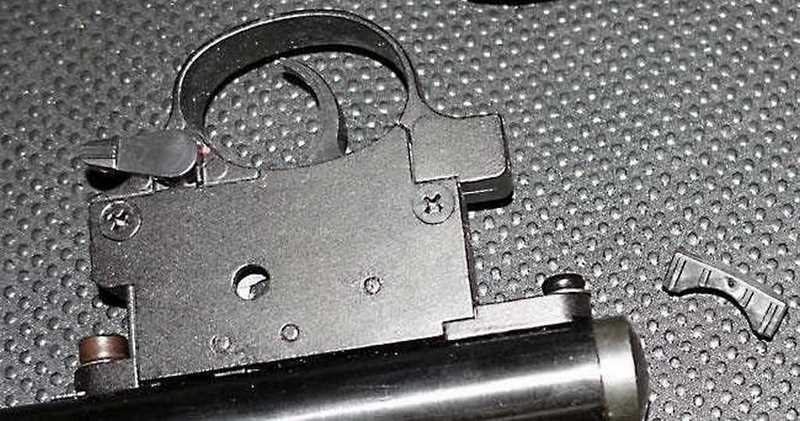 With the trigger exposed like this you can adjust it. The rubber piece on the right goes behind the action when it’s in the stock. 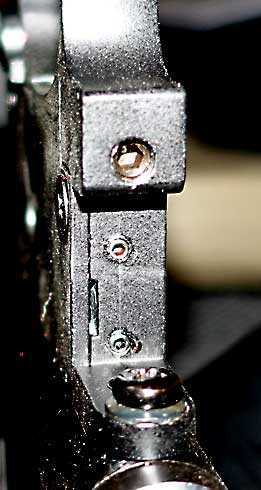 I lightened the trigger pull a lot (2-3 full turns) and I adjusted the overtravel screw until the trigger just broke with no more movement. If you adjust that screw in slightly too much the trigger becomes harder to pull but the sear still breaks, so watch it. Leave the sear engagement screw alone until you understand how the trigger works.

I played with the adjustments for several minutes, cocking the bolt and making sure I had the trigger exactly where I wanted it. This Gauntlet 2 trigger is not as smooth as the vintage Crosman trigger that it was copied from. But I did find that lightening the pull was key to getting rid of most of the squishy-ness that I complained of in the last report.

Following this I assembled the rifle in the reverse order of disassembly. To this point in the report I had spent about 90 minutes, taking things slow and also taking pictures as I went.

When I screwed the air reservoir back into the action I lubricated the o-rings on the reservoir with silicone o-ring lube. The manual says to use RWS chamber lube, which is also good, but I had the o-ring lube on hand so I used it. It’s thicker and more of a professional product. 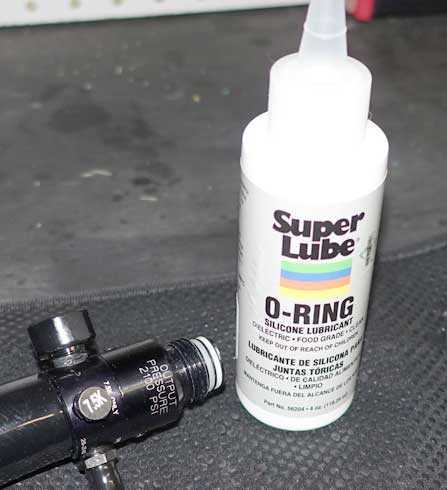 With the threads of the air reservoir lubed the reservoir screwed into the receiver much more easily than when it was removed.

Once the rifle was back together I cocked the bolt and tried the trigger. Nothing! The rifle would not fire. I spent several minutes trying to figure out what went wrong. Then it was obvious that I had to disassemble the rifle again to adjust the trigger to work.

This time even with the action out of the stock I could not get the trigger to release when the rifle was cocked, no matter what I did. So I removed the side cover of the trigger and inspected the parts inside. 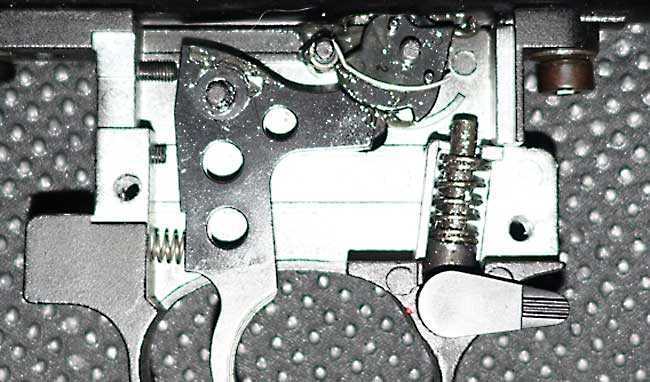 The inside of the Gauntlet 2 trigger.

I wish I could tell you what had happened to the trigger and why it wouldn’t fire, but I can’t. I made it fire by working the internal parts directly and after that it worked every time. There is a lot of grease inside, but I don’t think that was the problem. I think the hammer was caught by the sear and somehow jammed. Or maybe some of the parts are just rough. I did back the overtravel screw off a little more this time — just to make sure.

I just put the stock back on the barreled action and tried the trigger several more times. If it was going to fail again I wanted to be as close to disassembly as possible. But it never did.

Following this second adjustment I assembled the rifle again and tried the trigger several more times. It always worked. According to my trigger pull gauge the trigger now breaks very consistently  at 2 lbs. 12 oz. I purposely did not look back and read where it broke in Part 2 until after measuring it this time. In Part 2 it broke at 3 lbs. 2 oz. So it is a little lighter than before but not that much. There is still some squishy-ness in the first stage, which stops at 2 lbs. 7 oz., but with care I can always find stage two. The first stage pull is smoothing out, the more it gets used.

So the Gauntlet trigger is adjustable, but it’s not as fine as we might hope. I do feel that it will break in to be smoother with time and use.

Don’t get discouraged by what I’m telling you today. It isn’t as bad as it sounds. I’m just telling you everything that happened. The Gauntlet 2 is now ready for continued testing.

I think instead of a 3000 psi fill next time I will start testing the accuracy. Since the rifle had to be completely emptied of air to adjust the trigger filling it and firing it a lot seems like the best thing to do. After that I’ll test the shot count with 3,000 psi.