Home > Blog > Special/Unique > What kind of airgunner are you?

Several readers asked me to republish this report for all who might have missed it.  I went through and edited it, but there wasn’t much to change. What was true in 2011 is still true today.

One of our blog readers mentioned the excellent book Yours Truly, Harvey Donaldson, and I purchased it. It’s a compendium of articles that Donaldson wrote for Handloader magazine, a few special articles he wrote for American Rifleman back in the 1930s and some correspondence he had with various notable shooting magazine editors. I found the book so interesting that I’ve already given two copies as presents to other shooters.

For those not familiar with the name, Harvey Donaldson is well known as a shooter, writer and developer of many wildcat cartridges — including his best-known .219 Donaldson Wasp. He was able to get 12,000+ rounds from a .220 Swift with each delivering in excess of 4,000 f.p.s. — and the rifle could still group five shots inside a nickel at 100 yards. Today’s handloaders don’t have a clue who he is or they have forgotten the knowledge men like this have given us.

Among the hundreds of treasures in this book, Donaldson makes the casual comment in one of his letters that Dr. F.W. Mann, who authored The Bullet’s Flight From Powder to Target, wasn’t a very good shooter. He also wasn’t a very good reloader. That’s why (according to Donaldson) Mann had to resort to his Shooting Gibraltar concrete pier gun rest that weighed in excess of 3,000 lbs. and was sunk permanently in the ground. Donaldson says any good benchrest shooter could outshoot the groups Mann got using his rest.

That got me thinking. I have always thought of Dr. Mann as the penultimate shooter, and here is Harvey Donaldson, whose shooting credentials are impeccable, saying Mann wasn’t a shooter at all. He was a scientist.

1. Uniformity of the bullet’s base is extremely important to accuracy.

2. A bullet’s nose can be grossly deformed without affecting accuracy one bit.

3. The orientation of the rifle’s action must be consistent from shot to shot for the best accuracy.

4. A bullet can stray from the boreline in any direction on its way to the target and still hit the target exactly in the center.

Mann was an experimenter whose focus was on the gun and ammunition, rather than his own abilities. Not all shooters are like that.

Olympic and world-class target shooters tend to focus on their own abilities, to the point that they seem to assume the rifle or pistol they use is capable of perfect accuracy. Of course, they do test ammunition; but once they find what works, they buy it in quantity and concentrate on their own skills.

On the other hand, I tend to shoot from a bench more often than not. I want to see what the gun can do, and I’m not overly concerned about my own shooting skills.

In fact, I am just an average shot. If you were to plink with me, you’d soon discover that I can’t shoot any better than you and probably not as well as many of you. When I test an airgun for this blog, you don’t care how well I shoot. You want to know how well you can expect that gun to shoot. The benchrest takes as much of me out of the equation as possible and gives you a more objective picture of the gun’s performance. I know that several of you want me to clamp my test guns in a vise and test them that way, but I don’t have Dr. Mann’s resources.

Of course, you have to know how to shoot from a bench, and I have had lots of practice at that. Maybe I might seem like a good shooter to some people, but that’s only when I am as far removed from the shooting as possible. In truth, I am really a lot more like Dr. Mann, in that I’m more interested in the performance of the airgun than in my own ability to shoot.

But there are many shooters who are the opposite. They want to know how well they can shoot, and the rifle is just what they use to measure it. Of course, they’re aware that all guns are not perfectly accurate; and, yes, they do go through the same sort of search to find one that suits them best. Once they find it, all focus shifts back to their own ability to shoot rather than whether or not that rifle can be made to shoot any better.

These shooters are not all shooting offhand, either. Some shoot from the prone position, others from the sitting position and many will take a rest wherever they can find it. Some of them even use crossed sticks as a portable steady rest in the field.

Let’s compare these people to our American 2x Gold Medalist Olympic champion rifle shooter — Gary Anderson. They first want a gun and ammunition they can trust; and after that, it’s all up to them and their skills with the gun.

Let me give you a couple variations on this theme to better illustrate what I’m saying. There’s the guy who receives his airgun and plops down in front of a chronograph with a tin of pellets, first thing. For him, life is complete. He’ll sit there shooting thousands of rounds across the skyscreens as he inputs the results into endless spreadsheets of data to discuss on his favorite forum. He’s like Dr. Mann. He’s interested in one aspect of performance to the near-exclusion of all others.

The next guy buys the very same airgun and starts shooting it at targets immediately. He’s the guy who puts 80,000 shots on a gun and can talk about longevity issues that the rest of us will never live long enough to see. Where some of us live in the hopes of a good tuneup on our airguns, this guy has already performed four on his and has the parts on hand for the next two. To him, a tuneup is unavoidable downtime when he would rather be out shooting. He’s like Gary Anderson. He’s a shooter.

Another guy buys the same airgun and never shoots the first shot out of it. He tears it down and modifies it in ways that have either been recommended to him on the internet or that seem like the best way to go. Some of these guys have the rifle shipped to a certain airgun tuner and let him apply his magic before they ever set eyes upon their gun for the first time.

Then, there’s the guy why buys the same gun, sights it in with a good pellet and immediately starts hunting everything within sight. His gun is a tool, like his game caller and his rangefinder. He, too, is a shooter, but he doesn’t collect his shooting experiences as scores on targets, pictures of groups or numbers on a graph. Rather, he has an endless supply of memories of this hunt and that, what went right and what went wrong.

Does that explain it?

Does that, perhaps, explain why one shooter can be delighted with a rifle that shoots five of a certain pellet at 1,050 f.p.s. into a one-inch group at 30 yards and another cannot be satisfied until the same model rifle is tuned down to 850 f.p.s. and can put them all into a dime at 50 yards? Does it explain why a twangy firing cycle is so disturbing to one shooter, yet another can brush it off because the rifle puts them all where he wants them to go?

I am not saying that any of this is all one way and none of the other. But people do exhibit certain tendencies. Lloyd Sykes worked for years on the dynamics of an electronically controlled air valve, and for a short time the world enjoyed the Benjamin Rogue. Lloyd is a definite Dr. Mann. On the other hand, blog reader CowboyStar Dad tells us how many tens of thousands of shots he has on each of his guns. He wears out the mainspring in his IZH 61. He is a Gary Anderson-type shooter.

Hi. I’m new to airgunning, and I would like to try out one of these new air rifles I keep reading about. I don’t want to spend too much money until I know that airgunning is for me, so can you make some recommendations of guns that cost under $300?

Yes, I can recommend some guns, but what do you want to do with one?

Person 1. I want to shoot tin cans and other targets around the manure pile. I have been shooting a .22; but there are some houses going in down the road, and I want to throttle back for safety.

Person 2. I’m fascinated by the thought of plain old air pushing a pellet to 1,400 f.p.s. I want to see what’s possible.

Person 3. My yard is infested with tree rats that I want to eradicate. After that, I plan on taking my show on the road and cleaning out the whole woods.

Person 4. I used to shoot target rifle on the ROTC team, and I’d like to get back into it but still be able to shoot at home because I don’t have a rifle range.

Leigh Wilcox, the founder of Airgun Express, used to say that airgun targets had to bleed, break or fall. Maybe they did for him, but I’m not ready to shoot at targets like that just yet. I’m still concerned why there is a twang upon firing and why my velocity is only 761 f.p.s. when others report over 840 f.p.s. from the same gun shooting the same pellet. 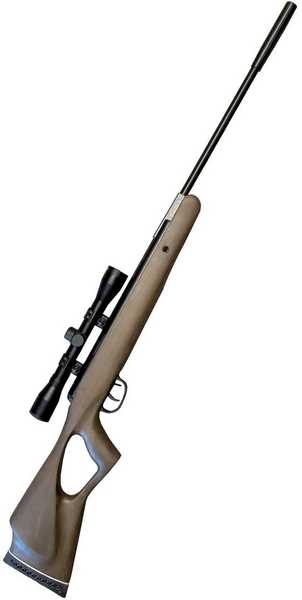 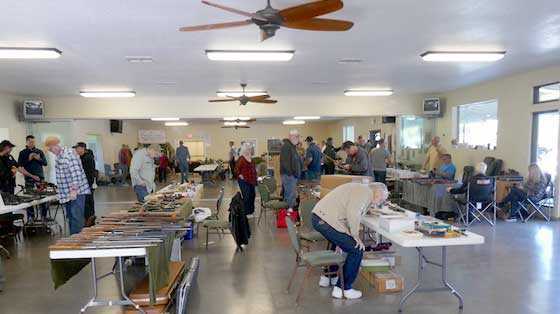 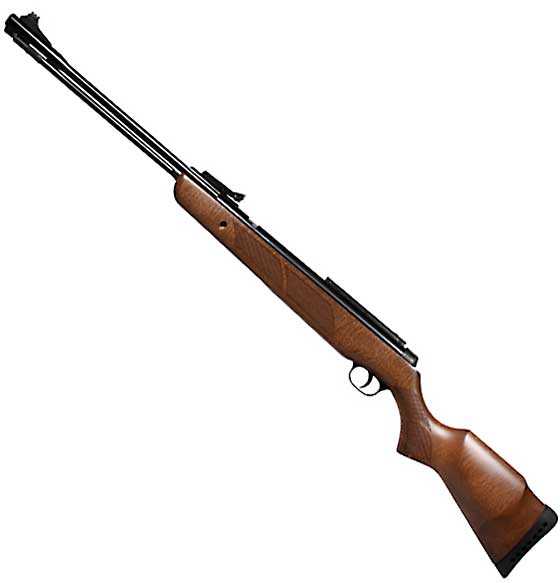