MER, MAR and MPR for Hunting

This is a guest report from reader Vana2, who we know as Hank. He has often referred to the maximum effective range and today he explains it to us.

Take it away, Vana2.

MER, MAR and MPR for Hunting
by Hank 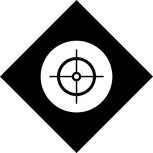 In my comments I’ve mentioned MER several times but never really explained what it is or what it is about. MER, the Maximum Effective Range, is a methodology for evaluating a gun’s capability, and a structured approach to improve a shooter’s skill.

If I had to describe the origin of MER in a couple of words I would have to say: bottle-caps. As kids we used bottle caps as reactive targets and MER grew out of the need (obsession?) to hit that bottle cap EVERY time! Yeah, one-hundred percent isn’t realistic but don’t try to tell that to a 12-year-old-kid.

The MER methodology developed from that need. To hit a bottle-cap every time you had to be close — very close! After a while close became boring so we would take a step or two back and shoot until we consistently hit the bottle-cap again. When that range became too easy we would back away a bit more.

As could be expected, this quickly became a competition. The coveted BEST SHOT award was granted to the guy who could consistently (25 consecutive shots by our rules) hit bottle-caps at the farthest distance. You can see where this is going — status is an important thing amongst your peers.

In our group, rabbits were big game and bagging one with our low-powered pellet guns got you bragging rights. Hitting one and not recovering it was sternly frowned upon and not something you wanted to happen. To bring down a rabbit required a precise shot at close range. Those who brought home rabbits regularly were skilled hunters who knew their MER.

Your MER, your Maximum Effective Range, is the range at which you are CONFIDENT of making a good hit in the current conditions.

Your MER consists of your Maximum Accuracy Range (MAR) and the Maximum Power Range (MPR) of the whole system. By the whole system I mean the hardware (gun, sights, ammo); the software (the shooter) and the firmware level (the shooter’s skill). Please pardon the computer analogies; I’ve worked with them ever since they were the size of a refrigerator.

About the Maximum POWER Range

Because pellets lose their velocity/energy so quickly it is common that the Maximum Accuracy Range of an airgun is greater than its Maximum Power Range. That being said, for hunting it is important to know the maximum range at which the airgun still has adequate power to humanely dispatch the game being pursued.

In this report I’m going to focus on the accuracy side of MER. For reference, here is a link to an airgun hunting article that discusses the subject hunting with airguns in more detail.

Why is knowing your MER important?

Kenny Rogers sang it right in his song: “The Gambler”…

The same is true when hunting. It’s as important to know when to pass on a shot as it is to take it. Knowing your MER helps shooters recognize and understand the capabilities of their weapon and their level of skill. It provides a baseline from which improvements can be measured.

I have always maintained that every gun is a tack-driver — up to a certain range. That range may be measured in inches, feet or yards. Knowing the MER of the airgun is necessary for ethical hunting.

The structured MER approach is designed provide the shooter (actually, their subconscious) with shooting experience from close to far.

Far makes sense but why start close? Most people think about the end (maximum limit) of their MER and forget that the distance from here to there starts at the muzzle. You should practice at all distances that you might encounter game. I’ve seen a rabbit missed at 5 feet because the shooter (me, LOL!) forgot that the pellet strikes about 2 inches lower than the crosshairs at that range!

The confidence to take the shot and the mechanics of making the shot comes from experience. Practice trains the muscle-memory and provides the experience of actually having done the shot before so you can easily repeat it. With sufficient practice, things like getting into stance and shouldering the rifle that previously required conscious actions become automatic — smoother, faster and more consistent — all of which is beneficial when out shooting. Random practice like hunting and casual plinking is useful but following a systematic approach is far more effective because the experience of shooting at progressively longer distances builds on itself.

MER can be used to test the capabilities of the hardware (gun, sights and ammo) or the shooter. When testing hardware I use a bench rest and shoot in optimum conditions to minimize induced inaccuracies. For testing the shooter I use the same stances that would be used for hunting – typically, standing and leaning/bracing while shooting off-hand.

Accessories, weather and clothing will affect your shooting so it pays to practice with all your equipment and in hunting conditions.

If you use other positions or shooting aids (e.g. bags, bi-pods & sticks) then you should test your MER with those as well. To keep notes what I was testing I added the following title block to my MER target.

This is the title block on my MER Test Target.

IMHO, the large targets made up of multiple concentric scoring rings are fine for formal target shooting but bad for hunting. I think that a simple target – a dot for an aim-point and a small circle for reference is less distracting and easier to focus on.

I find that the smaller your aim-point is the better your focus and accuracy will be so I keep the target as small as I can and still see it clearly at that distance. For close range a simple dot works well, at longer ranges I’ll use a more visible target that still offers a small aim-point and optionally, a reference circle. Whatever you choose, it’s best to use a constant size target as it develops a feel for knowing the distance.

Most of my MER practice is informal; for a target I prefer to trace a fender washer on to a Post-it note or directly on the cardboard backing board with a black marker. Occasionally, I’ll use self-adhesive dots, grommets or even commercial stick-on targets. 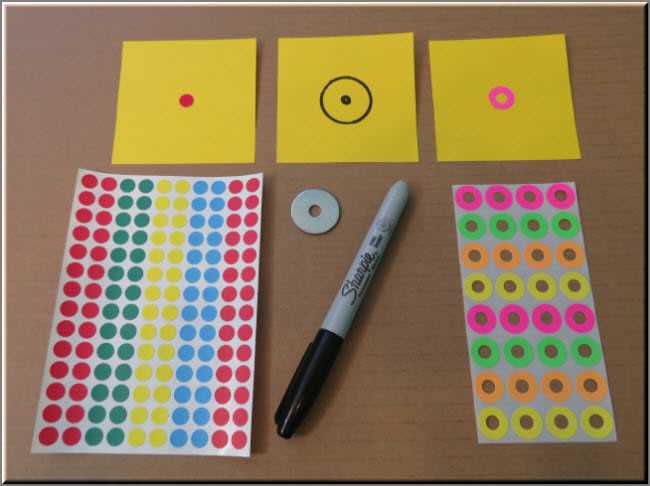 Some quick targets that are convenient for practicing. At 5 shots per target, I use a lot of them.

Since the hardware is what it is and no practice is required, its MER can be determined by shooting from a bench and noting the results for future reference. These days most airguns will shoot good groups out to their Maximum Power Range and beyond. Typically, the  limiting factor is the shooter’s skill, which I call the Maximum Accuracy Range.

For the shooter, MER practice is for developing good form, training muscle memory and generally gaining experience in shooting at all distances.

To fully benefit from practice sessions, you need to start close and systematically, incrementally, work your way back. This trains your muscle memory teaches the point of impact sight picture for each distance.

I start of each practice session with some casual plinking to warm up and relax. Then I shoot a few pellets at 5 feet, move back 5 feet and shoot another couple of pellets. I continue increasing the range in 5 foot increments until I reach the range where all the pellets are no longer inside my 1 inch reference circle. I’ll stay at that range until I can keep 25 consecutive shots in the targets then move back another 5 feet.

During my practice (as part of getting into stance) I’ll check the distance to the target before taking the shot. Every 25 shots (5 per target) I’ll take a break and walk down to the target and look at the results. The walk helps relate the physical distance to the visual estimate and inspecting where the hits are reinforces the point of impact/point of aim sight picture.

When I’m comfortable with the hardware and confident with my shooting at that distance I will shoot a formal MER target.

When evaluating the results of a session I don’t score targets for points or measure group size. I measure the distances from the Point Of Impact (POI) to the Point Of Aim (POA) total them up and average them. That number is good for reference as it tells me how much off the aim point I’ll likely be at that distance. 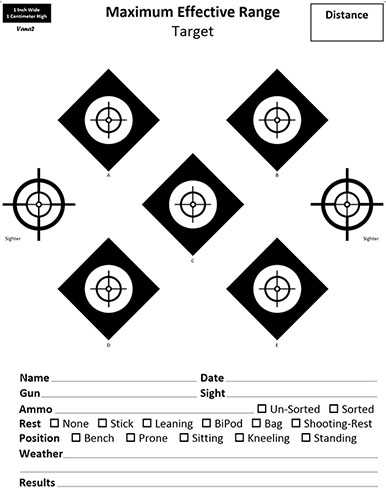 My formal MER target has five targets and two sighters. The target consists of a 1-1/2-inch black diamond for reference with 1-inch white circle in the center, a half-inch circle with cross-hairs and a 0.100-inch x 0.050-inch donut as the aim-point. Depending on your quarry, you might want to create a different sized target.

A session is five targets, five shots per target for a total of 25 shots. To pass all 25 shots must be in the white 1 inch area — just like the old bottle-cap days.

On a MER target a perfect score would be ZERO –- 25 shots stacked exactly one on top of the other. I can do that at 10 inches and maybe at 10 feet, but it’s not likely to happen at 10 yards. However, it’s still fun to try for one-hundred percent, even if it’s not realistic.

For hunting, if I can keep my hits within a 1 inch circle, that’s reasonable and I’m good to go …at that distance, shooting off-hand, in those conditions – because that’s my MER.

Hope this is of interest!
Cheers!
Hank 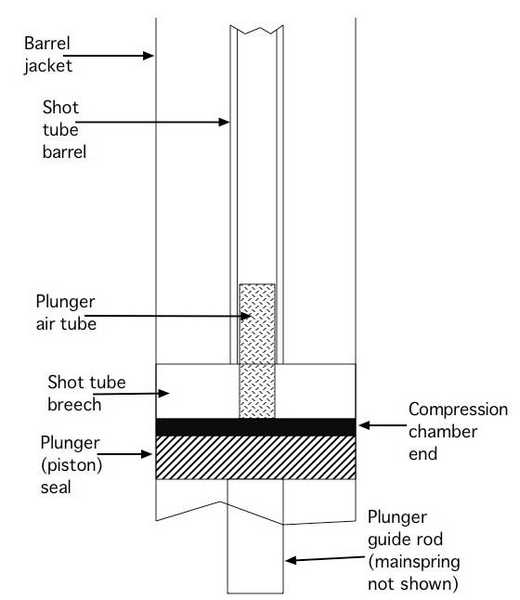