Today we start the accuracy testing of the .25-caliber Air Venturi Avenger Bullpup. And this will also be my first test of the new Meopta MeoSport R 3-15 RD SFP scope. 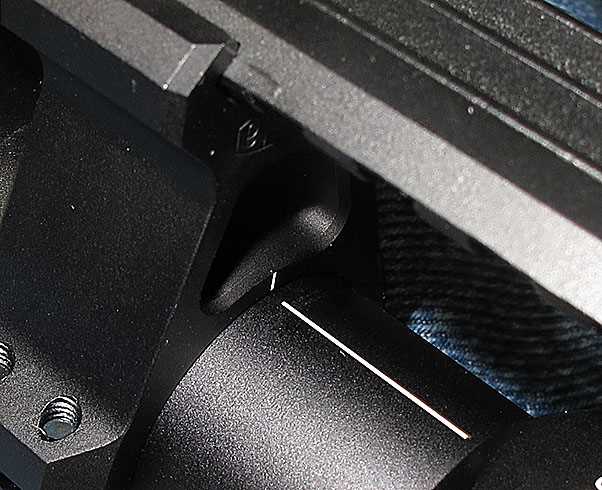 To find out if the scope was level I held the rifle to my shoulder and peered through. It seemed to be where I would have put it, so I’m declaring it level. I do think Meopta needs to add 2 centimeters to the length of the lines on both sides of the turret, because you can also level the scope using the rear line.

Today I’m shooting off a sandbag rest at 25 yards. I will shoot 10-shot groups with each pellet tested. And, I am shooting with the single-shot tray today.

After filling the rifle I sighted in at 12 feet with the scope set to 10 yards parallax and power setting three. The pellet hit as far below the aim point as the center of the scope is above the center of the bore, plus it was dead on, left and right. So I backed up to 25 yards. I thought I would be a little high on the target but since I wanted to preserve the endpoint, that was OK. However, the shot landed a bit too high. And it took me another six shots to get on target like I wanted.

Since I had perfected the sandbag hold with the Air Arms S510XS, I did the same thing with this bullup. It is butt-heavy, but pushing my shooting hand forward into the sandbag slows down all movement when shooting.

I started with JSB Exact King Heavy Mark 2 pellets, as I thought they might be the most accurate in this rifle. Remember — this is a .25 and there aren’t as many good pellets to choose from in this caliber.

Ten King pellets went into a 0.299-inch group at 25 yards. These groups may look larger because of the larger pellets holes. To get the center-to-center measurement I measure across the widest dimension and subtract one pellet-diameter. In this case, that 0.25-inches. That give me the distance between the two widest centers.

The next pellet tested was the Predator Polymag. Ten of them went into 0.458-inches at 25 yards It is the second-smallest group of the test.

The Avenger put 10 Benjamin domes into a 0.998-inch group at 25 yards. It is the largest group of the test and I have to say that the test rifle does not like this pellet.

Ten Benjamin domes made this vertical 0.993-inch group at 25 yards.

After this group I refilled the rifle. We learned in the previous Part that on this setting of the regulator and hammer spring there are 30 good shots on a fill and I didn’t want to push it.

Next I tried 10 H&N Baracuda pellets. Like I said, there aren’t that many good pellets to test in .25 caliber and I wanted to give the rifle a fair test.

Ten Baracudas made a 0.734-inch group at 25 yards. That one stay pellet at the lower right was not a called pull. But if it wasn’t there the other 9 pellets went into 0.539-inches.

End of the test?

I had planned to stop after the Baracuda group, but I had seen RWS Superdomes in my cabinet when I pulled the other pellets, so I decided to give them a try. It couldn’t hurt.

Ten Superdomes went into 0.686-inches at 25 yards. The first several shots scattered but by the end of 10 shots the group was fairly round. 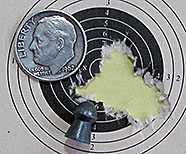 Four out of the five pellets tested gave round-ish groups, which I always like to see. It means the pellets are trying to go to the same place, even if the group is larger.

The Meopta scope made this test possible. That illuminated red dot hovered over the bullseye dot with consistency, and my hold cemented it. I ran the illumination at the highest setting, which is 11, and I noticed some light flaring inside the scope. However when the scope was aligned with my eye there was no flaring and only the dot in the center of the crosshairs was illuminated.

I haven’t told you this yet but the Meopta lens covers have transparent windows so the rifle can be shot without them being removed. This is a thing hunters need to know.

We are just getting started with the accuracy test. I next want to mount a bipod and see what that does, now that I have a baseline against which to test. I also want to test accuracy with the magazines.

Is the bullpup the rifle for you? That’s a personal thing. I prefer rifles but this bullpup gives up nothing. 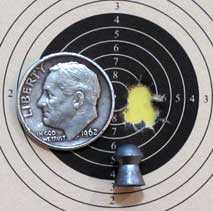