This is a special guest report from reader Paul Hudson, on his Diana model 20 youth breakbarrel spring airgun.

Take it away, Paul.

Airgun collecting can take you down some unexpected paths, and this Diana Model 20 is a perfect example.  It is very small, nickel-plated, and has only a quarter-stock (no forearm); all things that I don’t really like in an airgun. So why did I buy it? Precisely because it is so different from the rest of my collection.

The model number 20 is a designation that Diana has used for multiple airguns. First was the pre-WWI model 20 which was made from around 1907 until 1911, according to the Blue Book of Airguns. My model 20 is the second version and was made from 1913 until about 1940. Both model 20’s were nickel-plated, tinplate airguns; the most noticeable differences are that the original 20 had square-ended forks and three rivets attaching the stock instead of the rounded forks and two rivets of later guns. The Blue Book lists this gun as the Model 20 Youth to distinguish it from the much later and completely different Model 20 Adult.

The only caliber option was .177/4.5mm with a smooth bore, presumably to keep costs down. Diana’s period literature mentions very good grouping at 6 to 8 meters and at that range the lack of rifling is not a detriment. For the shy kids Diana did offer the 20 with a traditional blued finish on special order.

Nice logo but no model number!

Keeping with Diana’s practice at the time there is no model number on this gun – just the Diana name and Goddess logo, but the model 20 looks like nothing else that Diana produced at the time.

The model 20 is 34.25-inches (87cm) long with an 14.25-inch (36cm) barrel. The length of pull is 12.5-inches, or 32cm and the weight is only 2 pounds, 12 ounces (1.25kg) so it is definitely kid-sized. At only 7/8-inches thick the walnut quarter stock reinforces this impression. Compared to a modern Daisy Red Ryder the Model 20 is about an inch shorter but weighs a half-pound more. The Red Rider also feels larger due to its thicker fore end and stock.

The stock is stamped with the date 1.31 (January, 1931) where the wrist meets the metal of the action, and it has no checkering or grooves. 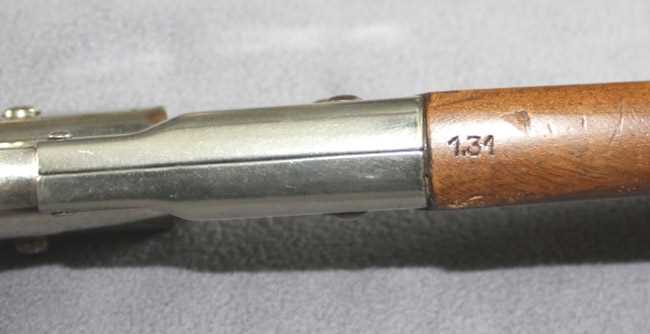 One area that Diana did not skimp on is on the appearance. Other than the sights and the trigger all of the metalwork has a mirror-like nickel finish. This airgun is 90 years old and the only wear is on the cocking arm, and that is constantly handled. Even the plating on the barrel has not been worn through.

The fixed sights are definitely not adult-friendly; the rear sight in particular is next to useless for anyone with less than  perfect vision. In the early 1930’s the rear sight was moved to a more useful location on the breech block and made adjustable for elevation.

To get groups instead of patterns I made a simple peep sight by drilling a small hole in a piece from a metal pet food can. The rear sight was wrapped with electrical tape to avoid scratches and the base of the new sight was carefully crimped onto the existing rear sight. With the peep sight I can actually hit cans out to about 25 yards! 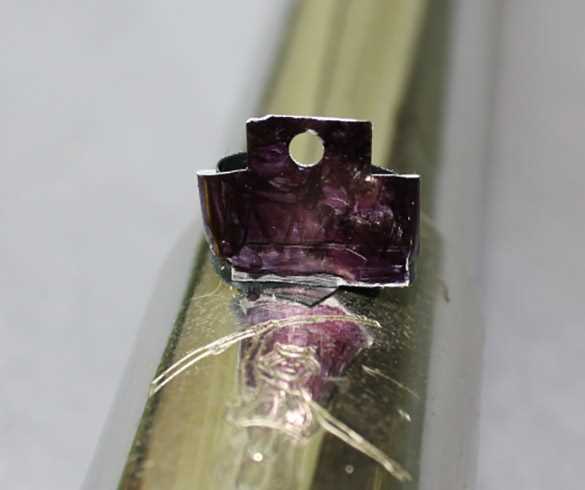 Yes, it is crude, but I can get groups now!

As was mentioned above, the model 20 was only sold as a smooth bore. The soda straw barrel is made of brass and is held within a folded-metal housing to give it a proper appearance. This same setup was used on the models 15, 16, and 22 well into the 1980’s and is completely serviceable. Since the barrel is brass it won’t rust and will probably never need cleaning. 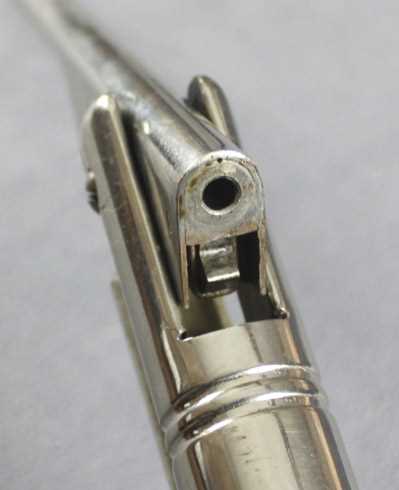 The barrel is a brass tube in an outer jacket.

The receiver is a bit complicated for a low-priced kid’s gun. Where most airguns use a steel compression tube with forks machined from bar stock the 20’s action is made of four parts. The outer “jacket” was formed from sheet steel; you can see where it is wrapped around the barrel forks above.

Complex construction for a kid’s gun!

The actual compression tube is a thin-wall cylinder within the receiver and the whole assembly is tightly crimped together by a strap on the underside of the front part of the receiver. The split in the outer jacket is visible with the trigger guard removed.

Shooting the Diana 20 is a pleasant experience.  Being a kid-sized gun, the cocking effort is kid-sized, too: only 10 pounds. The barrel breaks easily and the spring compresses very smoothly with no crunching sounds.  As with most airguns of this era there is no safety or anti-beartrap mechanism. It is possible to decock the gun by breaking the barrel completely down and, while holding the barrel, pull the trigger and let the mainspring decompress.

I did disassemble this gun to clean and properly lube the internals; there was no special work done that could be considered a “tune”. However the shooting cycle is still very smooth and the noise level is very low with no spring buzz. I think that it is even quieter than a Daisy Red Ryder. Since the Model 20 is so light it does move a bit when fired.

Testing was done with a fairly wide range of pellets weighing from 4.2 to 8.6 grains.  Velocities ran from the upper 300’s to the upper 500’s.  The extreme spread with several pellets was 5 feet per second.  Muzzle energy ran from 2.4 to 3.2 foot-pounds, depending on the pellet. That’s not enough for ethical hunting but just perfect for short range plinking. 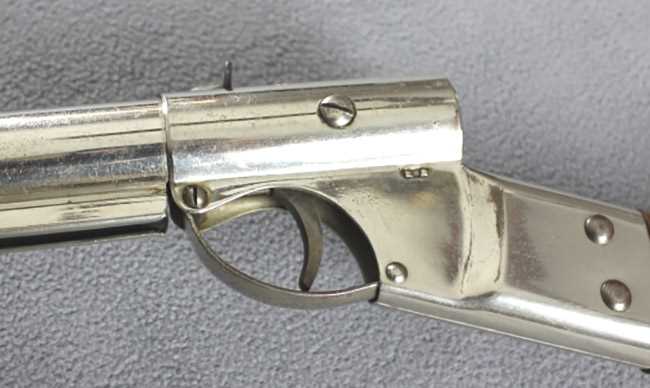 The single-stage trigger breaks at around 5 pounds.

Getting the best groups with the Model 20 takes a lot of concentration: the basic sights, light weight, and heavy trigger all work against you. The single stage trigger breaks at about five pounds and has some creep that is really noticeable when target shooting. For informal shooting it is less of an issue.

Diana described the Model 20 as having “good accuracy from 6 to 8 meters” in its advertising from the 1920’s but with the right pellet it achieved some surprisingly small groups. Most pellets gave groups around three-quarters to one inch at 8 meters and a couple were just awful.

All targets shown below are five shots each at 8 meters. 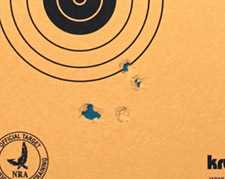 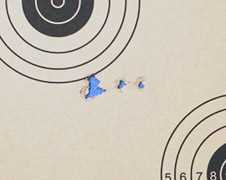 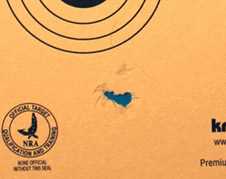 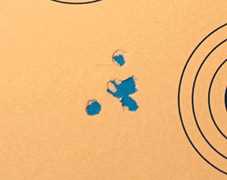 Any of the pellets above are completely adequate for short range plinking, and I was pleasantly surprised how well the Geco pellet did considering its low cost. With a little holdover it was pretty easy to hit 3-inch diameter pet food cans at 25 yards!

The Model 20 is a basic airgun from a simpler time. It was one of Diana’s least expensive models but it was very well made. The trigger is quite heavy — probably to prevent accidental discharges by a less than careful kid — and that makes shooting for groups a chore. The rear sight is almost useless for someone without perfect vision. But it is perfectly suited for shooting cans in the back yard without disturbing your  neighbors.

It is also a pleasure shooting a 90-year old airgun that is surprisingly accurate with the right pellet and I am glad to be its owner for awhile, until I pass it on to someone else. 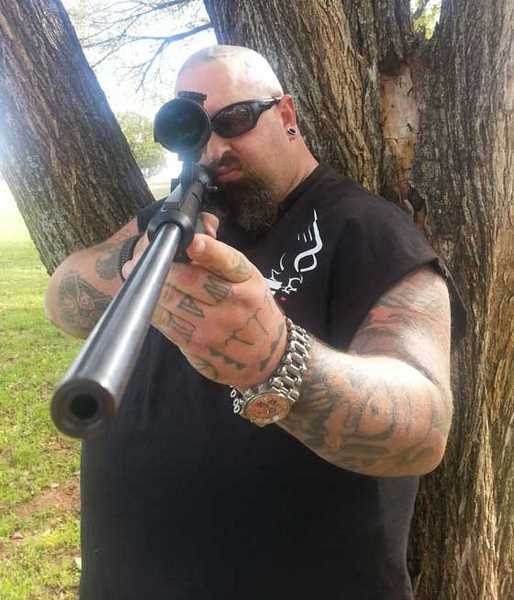