I have a report today that goes way back to the start of this blog. Today I scope the Crosman Fire and shoot it — EXACTLY AS CROSMAN SENT IT. In other words — no funny stuff and aftermarket parts. The rifle, scope and mounts as sent from the factory.

I’m doing this for a reason. Sometimes this is the only rifle a person can afford. They have to use the scope because there are no open sights and for sure they don’t have any other scopes or rings to use. This is it!

And in all likelihood they have never read this blog. None of the stuff I would normally do is known to them. They are using the rifle exactly as Crosman sent it. And that is how I will test it.

Don’t worry — I have a plan. And it isn’t to say bad things about the Fire, so you can relax. What I’m doing is starting at the beginning and doing what needs to be done to wring out all the goodness the Fire has to offer. And I believe there is a lot.

The first step was to mount the scope. 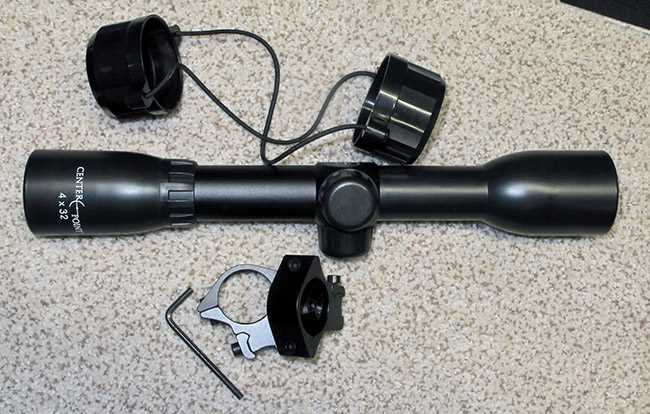 This is what comes with the Fire.

The scope mounts differ in a way I will now show you. There is a definite front and back mount. 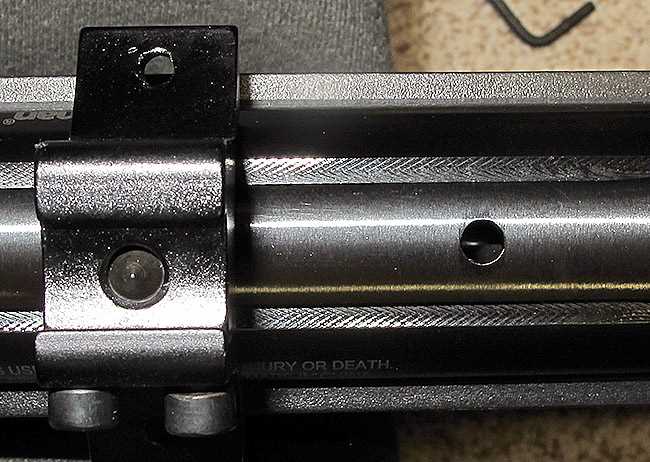 Here you see the underside of the rear scope mount on the left. That pointed thing is the end of an adjustment screw and it goes into the spring tube hole seen on the right. That keeps the scope and mounts from walking backward under recoil.

And here you see another difference between the front and rear scope mount. The rear is held by two screws while the front is held by just one. The two screws are needed because of the stop pin you just saw. Both ring caps have two screws.

And there you have it. The scope is installed.

I will not go into how to “level” the scope’s reticle because we have discussed it so many times recently. I will just tell you that I made the vertical reticle appear to bisect the spring tube when I brought the rifle to my shoulder.

Now it’s time to sight in the Fire. I will do that with Crosman Premier 10.5-grain domed pellets. Before I sight in, though, I have something to tell you.

In my experience this rifle will shoot too low at all distances and will not be correctable with the scope adjustments That is one big reason I’m doing what I’m doing today. It’s not to embarrass Crosman. It’s to demonstrate to all the new guys what breakbarrel air rifles are like.

Normally I would have put one or two shims under the scope tube on the rear ring saddle to elevate the rear of the scope. That makes the scope “look” down, and that brings the point of impact up. I have seen it hundreds of times. It’s just experience. Been there, done that, got the t-shirt and wore it out!

Today I didn’t do that — just to see what would happen. But since I was so sure it would shoot low, I mounted the target paper up and down to give me the maximum room to see the pellet hole.

Now let’s get back to the sight in. I stood 12 feet away and aimed at the center bullseye on the right side. The pellet hit the paper 2-3/4-inches below the aim point — from 12 feet! 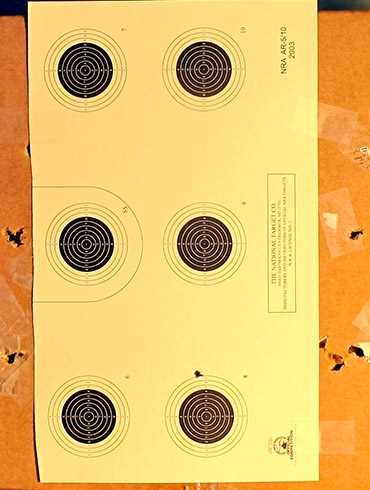 I aimed at the center bull on the right side. The shot is aligned pretty well left and right but impacted 2-3/4-inches below the aim point. Remember, I’m shooting 10.5-grain Premiers.

Now I backed up to 10 meters and shot the rifle off a sandbag, using the artillery hold as best I could. With the Fire’s thumbhole stock you can’t get away with the classic artillery hold.

But before I show you that first group I will show you all the shots in this test. That will make it easier to follow along. 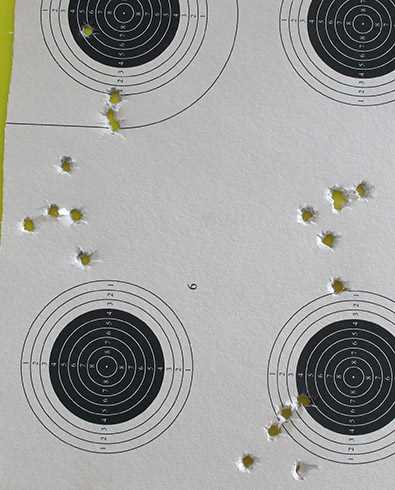 There is every shot fired in this test. You can still see the first shot on the right. It touches the outer ring of the bottom right bull at almost 12 o’clock. I will talk you around the target as we go.

I then shot five shots without adjusting the scope from the first shot. I thought the group would rise, but instead it sank lower by more than an inch. It also went more to the left. The five shots landed in a 0.673-inch group, which isn’t bad for reasons I will share in a moment. I’m still shooting 10.5-grain Premiers.

The first group of 10.5-grain Premiers dropped lower than the sight-in shot and also went to the left. It measures 0.673-inches between centers.

The group is good because the 4X32 scope that’s on the Fire isn’t parallax-adjusted for 10 meters. The bullseye appears somewhat fuzzy. I’m doing my best, but it’s hard to be precise.

After seeing this group I adjusted the scope up. How many clicks I can’t say — a couple full turns of the adjustment wheel. I also adjusted the scope 7 clicks to the right. The clicks are there and positive. Since both of these adjustments relax the tension on the erector tube return spring, I watched for stiction and scope shift.

For the second group I aimed at the center bullseye on the left. This group of five Premier heavys went two inches higher but was still that much below the aimpoint. And it was still left of center. This group measures  0.983 inches between centers. 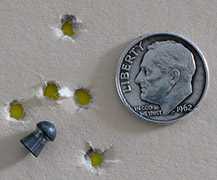 Adjusted the scope a second time

This time I adjusted the elevation up until the adjustment wheel stopped. This is as high as the scope will go. I expected to show you a blown (wide) group, but that did not happen. I also adjusted the scope 6 clicks to the right.

The third group was also shot with 10.5-grain Crosman Premiers. The first shot landed in the bull I was aiming at. The group measures 1.008-inches between centers — BUT — the last 4 shots are in 0.284-inches at 10 meters. Ladies and gentlemen, the Crosman Fire can shoot! That group tells me it can be accurate because the scope is adjusted as high as it will go and the rifle is still grouping. In fact the first shot may be from stiction and the last 4 are the real group. I have more testing to do and you are witnessing every wrinkle in the fabric. 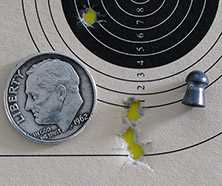 Please note that although the first shot did hit the bull I was aiming at, the main group is still too low, even when the scope is adjusted up as high as it will go. So, my comment about always shimming the scope is valid.

I then shot a final five-shot group with the Air Arms 8.44-grain dome with a 4.52mm head. I wanted to see if it might go higher than the Premier. But it didn’t. It landed two inches below the aim point, which was the center bull on the right. Five shots went into 0.591-inches at 10 meters, which, given the fuzzy aimpoint, isn’t bad. 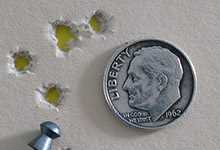 The trigger pull is long and vague. And, when coupled with the fuzzy bullseye, it did make shooting accurately difficult because I never knew when the rifle was about to fire. This is one case where I have trouble with the trigger. I do think it can be learned though. My old Beeman C1 had a bad trigger until it broke in. I suspect that’s what is needed here.

I think the Crosman Fire is a great buy for those who are willing to put in the effort it takes to make it perform to its potential. That’s another reason I will go through this test slowly and reveal everything I’m doing as we proceed. I think this is a good one! And no, I didn’t clean the barrel before the test. A newbie wouldn’t so why should I?