Before I start, I wanted you to know that the December podcast posted yesterday.

Today, I’ll test the Marlin Cowboy for accuracy. It’s a good-looking new BB gun but a couple issues like hard cocking, a heavy trigger and a couple failures to feed have me riding the fence on its success.

We have three BBs to test in the gun: Daisy zinc-plated BBs, the Crosman Copperhead BBs and the RWS BBs that Pyramyd Air doesn’t currently stock. Testing is offhand, standing 15 feet from the target and using a Crosman 850 pellet and BB trap because it traps most of the BBs.

Trouble from the get-go!
First out the spout were Daisy zinc-plated BBs. They tended to group near the point of aim, which was a 6 o’clock hold on a 10-meter pistol target. When I went up to the trap, I found only 5 of the 10 holes in the target. So, 5 BBs missed the 7″x8″ target paper altogether. From 15 feet! Now, I’m not a great marksman by anyone’s definition, but at this same distance shooting a Daisy Avanti Champion 499 BB gun, I can keep all my shots on an American dime, which is 0.705 inches. So, missing a target that’s 10 times larger is pretty bad.

I moved up to 12 feet and shot again. Now, all shots landed on paper. In fact, they were in a pretty good group. If I had shot that target from 15 feet, all would have been right with the world; but having to stand 3 feet closer was a bummer! 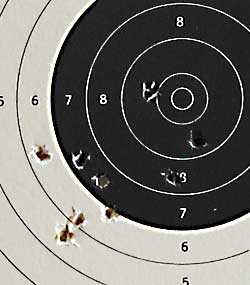 A pretty good group, but I had to shoot it from 12 feet instead of 15. Daisy zinc-plated BBs.

I wanted to blame the wide rear sight notch for my accuracy problems until I checked a Daisy Red Ryder. My vintage No. 111 model 40 Red Ryder has a rear notch three times wider then the one on the Marlin Cowboy, so no complaints, there. Not because a Red Ryder is all that accurate, but because it has been the gold standard for the past 60 years.

Following Daisy zinc BBs, I loaded up with Crosman Copperheads and tried again. This time, I started at 12 feet, which was a good thing, because Copperheads were not as accurate in the Cowboy. There were also more failures to feed with Copperheads than with the other two BBs, though the gun did have feeding problems with all three. 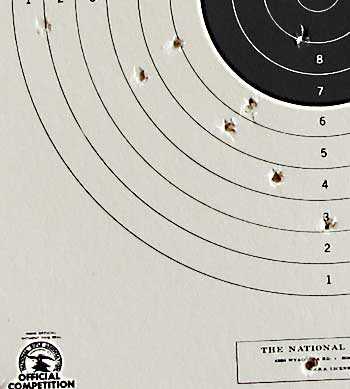 Crosman Copperheads didn’t group as well, despite shooting from just 12 feet. They seem too loose for the shot tube.

Following the Copperheads I loaded some of the new RWS BBs in the Cowboy and shot once more. Again, the distance was 12 feet. The RWS BBs fed better than the Copperheads and grouped almost as tight as the Daisy zincs. I think this is a BB that needs more testing, because they seem to run neck-and-neck with Daisy zincs in most guns, and who knows what they would do in a 499? In fact, that sounds like a good test to me. 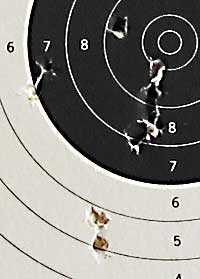 As we’ve seen in other tests, the RWS BBs hold their own with Daisy zincs. They merit future testing.

I also think I might test an original Red Ryder this same way, just to get a comparison between vintage and modern. Because the Marlin Cowboy has a gravity-feed magazine it wouldn’t be fair to test it against a Daisy No. 25 with its forced-feed magazine, but a vintage Red Ryder might be very interesting.

Back in the 1950s, I can remember wanting to mount scopes on my BB guns, because I was under the impression that a scope would somehow make the gun more accurate. The Daisy guns of that age were just beginning to come with scopes, so it was very possible to get them that way, though I never had one. But, I’m mentioning it because I can see no similar provision to mount a scope on the Marlin Cowboy. Have we forgotten the lesson of the upsell?

Final impression
Wood and metal seem to be the Cowboy’s strong points. Functioning and accuracy are its drawbacks. Only time will tell if this new BB gun will take its place alongside the classics.

I have three BBs to test today, and the EBOS brings us a complex set of operating parameters. You can select from either one shot, which simulates semiautomatic fire, a 4-shot burst or an 8-shot burst. But there’s also the rate of fire to select. It can be set for 300, 400 or 500 rounds per minute (RPM). I discovered very quickly that 300 RPM is too much like shooting an M3 grease gun, which bounces around in your hand without much possibility for accurate aimed fire. So I did what every EBOS owner will eventually decide to do. Set it to 8-shot bursts and 500 RPM. Once I did that, I made no attempt to test the other rates or the lower burst count. Nor would a cigarette boat owner use a trolling motor for better fuel economy!

At first
In the beginning, I was just trying to adjust the rear sight so the groups would be centered on the bull. The rear sight is fiddly and I found it difficult to adjust. When I shot, I felt the rear notch was too close to my eye for good accuracy, but the gun proved me wrong on that count. I’ve had the same problem with 9mm MP5s, and they always seem to hit their target as well. Apparently, mine are just the ramblings of an old dog who cannot learn new tricks.

Once the rear sight was centered in adjustment, the gun shot to the point of aim. I wish there was an elevation adjustment on the rear sight as well, but I suppose most owners will slap a red dot on the top Picatinny rail and be done with it.

Crosman Copperhead BBs
The first BBs I tried were Crosman Copperhead BBs. As I fired 10 semiauto shots, I was impressed by how smooth the EBOS trigger is. That’s no doubt due to the electrical drive unit in the pistol grip. All the trigger has to do is make contact and the gun fires.

The first group was impressive, especially in light of the tests of the other two guns. You can’t even see 10 holes in the target, but one hole at the bottom of the group is clearly larger than the rest, and apparently swallowed four BBs. 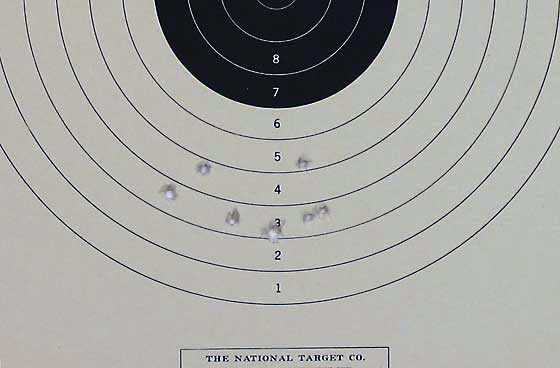 An impressive group that demonstrates the EBOS stability in the semiauto mode.

Then, I switched to rock ‘n’ roll. I first tried 300 RPM rate of fire and a 4-round burst, but it soon became obvious that wasn’t the way to go. So, all the switches were set to the max, and that’s the way the rest of the test was conducted.

Compared to the other tests, this constitutes a screamer target for full-auto.

Daisy zinc-plated BBs
Next, I loaded Daisy zinc-plated BBs and ran a second 10-shot semiauto test. Oh, my gosh! I got accuracy that’s not too far from the Avanti Champion 499 target gun! And this was with the sights I was complaining about! Imagine what this gun could do with dot sights!

Now, THAT is a group! For a BB gun, you aren’t going to do much better.

At this point, I was wondering what would happen when I switch over to warp drive. Well, you know the answer. I switch and the gun continued to group tight. I kept shooting and reloading, shooting and reloading. At this point, my test design was blown because I hadn’t tested the other two guns the same way, nor am I going to. But I figured a part of this evaluation was the fun factor, and any day you can keep my finger on the trigger of a full-auto gun, you know I must be having fun!

Holy cow! I’m not that good a shot. This gun shoots like it has radar or something.

RWS BBs
Finally it came time to test the new RWS BBs. You may recall from the Steel Storm test that these BBs were almost as good as the Daisy zincs, and I said that more testing would be needed. Well, look at what happened with the EBOS.

Every bit as tight as the Daisy target on semiauto fire.

When I switched to overdrive with the RWS BBs, something wonderful happened. The group stayed the same size. It just has about four times as many BBs through it. I could not stop shooting, and I know the full-auto group has at least 40 rounds in it.

Crosman 850 trap
Wow! It’s been a while since an airgun made me smile like this one does! And do you remember that I said I would be using the Crosman model 850 BB trap for this test? Well, I did, and despite the power of the EBOS, the trap did not suffer one bit.

So, now I’ve tested all three BB submachine guns completely. And here’s my assessment. The Steel Storm is the best value, but the EBOS is THE boss!