A multi-shot break barrel air rifle has all the advantages of a typical break barrel, but it's a repeater, so it isn't restricted to a single shot per reload and instead uses a magazine. This allows users to spend less time reloading and get more time shooting, because although the gun has to be cocked before each shot, it does not have to be reloaded until the magazine is empty.

A quick glance at the rifles below makes it seem as if they are very similar to each other, especially in terms of velocity and features, such as an included scope. While they are all excellent rifles for convenient small-game hunting, pest control, and plinking, they do have some differences besides price.

One difference that may interest those looking for a multi-shot breakbarrel to carry around on a long day in the field is that the Gamo models are almost half as light as the other models, which can be significant after several hours of transporting and shooting them. Also, the Gamo models require less effort to cock, and the Gamo Swarm Fusion & Magnum 10X Gen2 models are the only ones that offer fiber optic front and rear sights.

For added convenience, the .177 models of the Crosman airguns have higher magazine capacity that other manufacturers have started replicating (12 shots versus 10 shots), and the Crosman Mag-Fire Ultra features a Weaver/Picatinny optics rail instead of an 11mm dovetail, as well as studs to attach sling swivels. 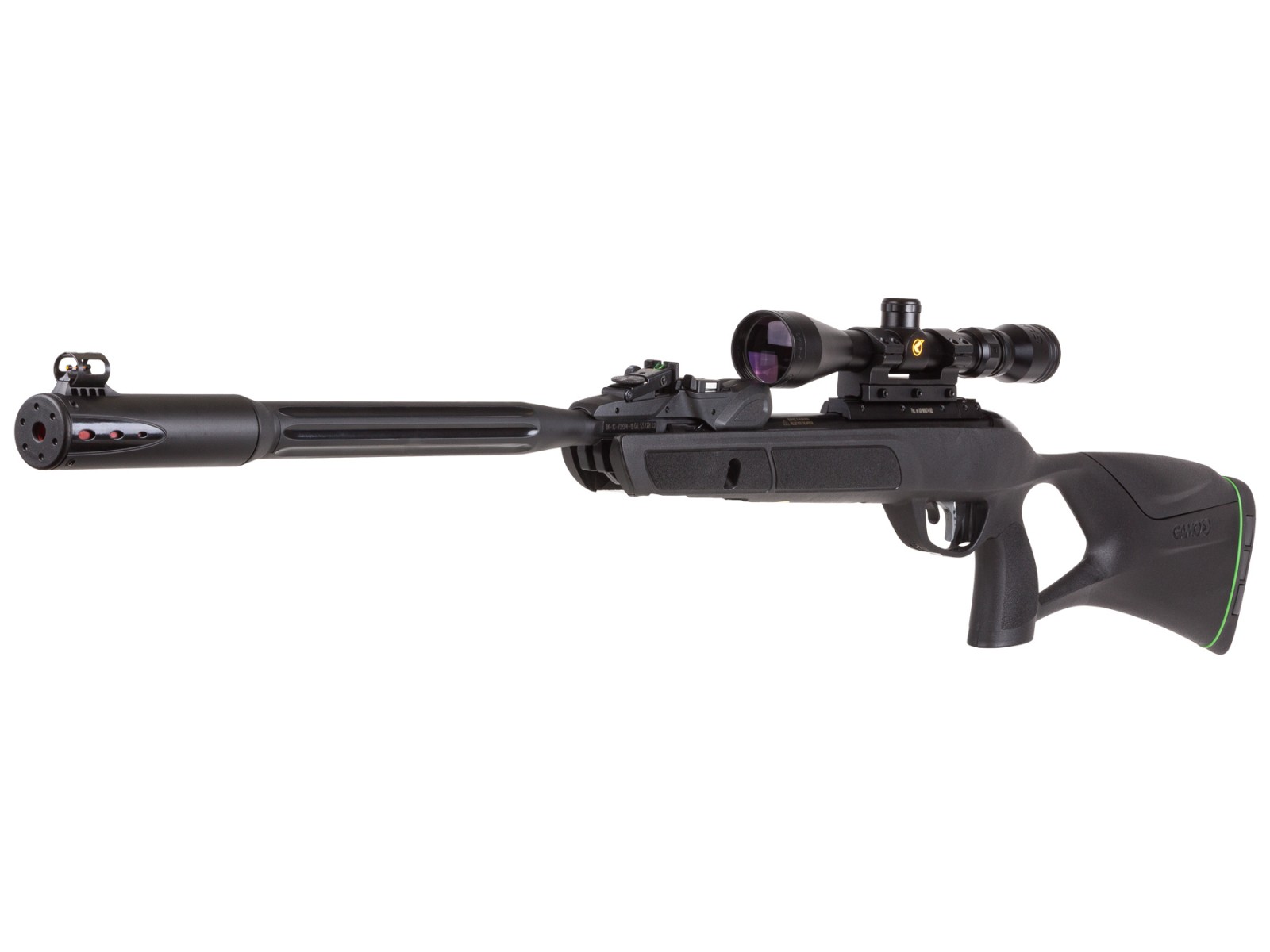 Back in 2017 Gamo created a swarm that swept over the world of break barrel airguns (pun intended) by introducing the first successful and reliable multi-shot break barrel air rifle that used a rotary magazine to automatically load the pellets when the gun is cocked.

Fast forward a few years, and Gamo has not been resting on its laurels. We now have the Swarm Fusion 10X Gen2.

It is a 10 shot break barrel repeater, which uses a gas piston for its power plant, but the list of features doesn't stop there. The newly redesigned low profile 10 shot magazine and feed system allows the scope to be mounted closer to the bore. Other features include: a patented polymer jacketed steel barrel with the Gamo Whisper Fusion sound dampening system, fiber optic front and rear sights, a recoil reducing scope rail, a 3-9x40 scope, a smooth adjustable Custom Action Trigger (CAT), SWA (Shock Wave Absorber) recoil pad, an automotive grade glass-filled nylon all-weather stock, a manual safety (thank you Gamo), and a 5 year limited warranty!

That's a lot of value put into one package!

This rifle is accurate, lightweight and easy to cock. The magazine fed loading allows for quick follow up shots and the manual safety does not automatically engage when the rifle is cocked - all of which makes the Gamo Swarm Fusion 10X Gen2 perfect for hunting.

It is also one of the few self loading break barrel rifles with fiber optic sights.

From the factory the Custom Action Trigger (CAT) is set to between 2-3 lbs. But it is adjustable to your preference. The Recoil Reducing Rail (Gamo abbreviates it as RRR) eliminates 99.9% of the shock of firing the gun from being transmitted to the scope so your optics will last longer. Plus, the Whisper Fusion Sound dampening system makes the rifle very quiet and as we say, "backyard friendly."

In order to remove the scope covers you have to have the barrel open in the cocking position. Some owners might not like the scope that is bundled with the rifle, but that can easily be changed.

From the factory, there are no sling mounts on the rifle, but with a weight of less than 6 lbs, it is still easily carried all day without fatigue by most owners.

This particular model does not have an "anti-double feed" system, so if you cock it, and then cock it again, you could load 2 pellets into the barrel. 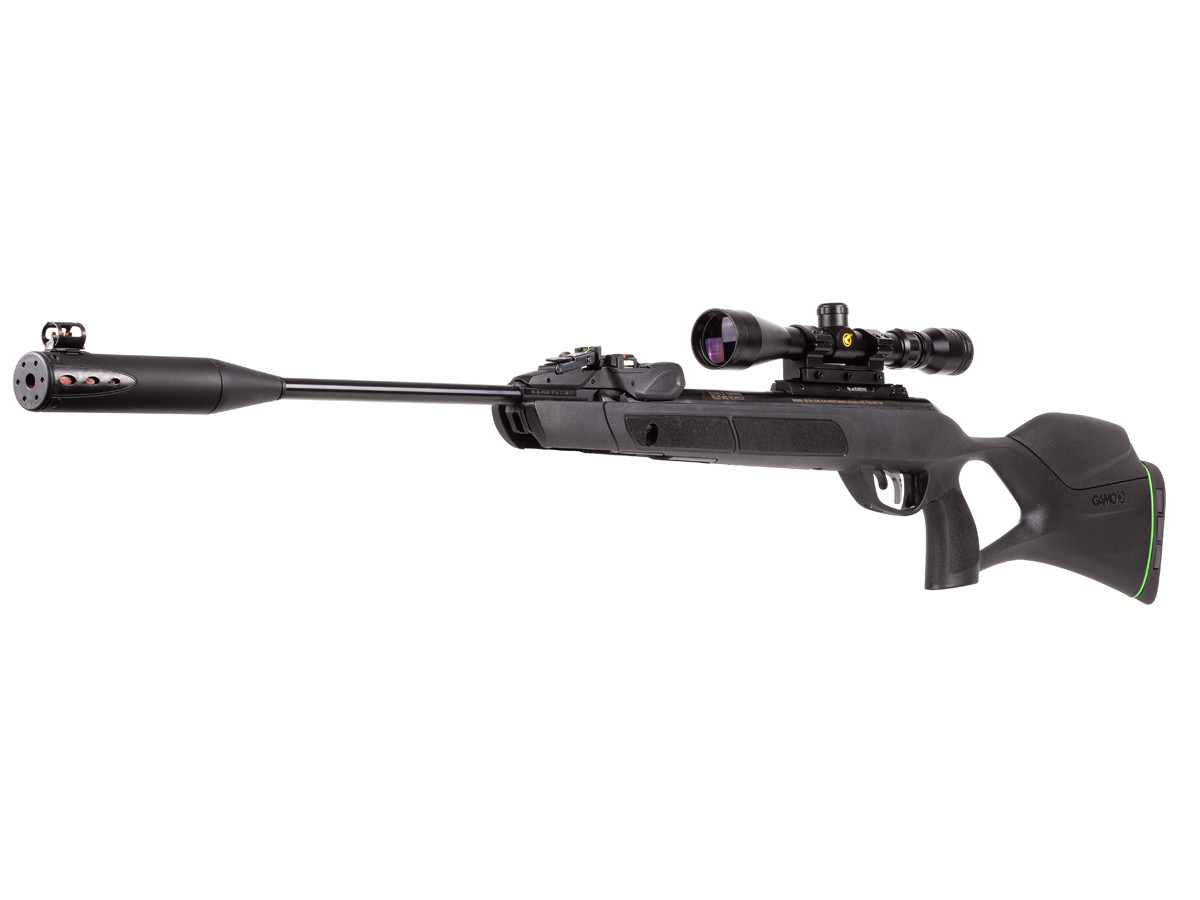 This is the best way to describe the Gamo Swarm Magnum 10X Gen2: unparalleled speed, performance and power - combined with smoother operation and improved accuracy, create an unprecedented shooting experience.

The Gamo Swarm Magnum 10X Gen2 uses the IGT Mach1 gas ram (IGT stands for Inert Gas Technology). The Mach1 version is a massive 33 millimeter diameter cylinder so it can deliver more velocity (up to 1300 fps with .22 caliber alloy ammunition) that uses a completely redesigned 10 shot, low profile, inertially actuated magazine. It will not advance a new pellet until the gun is fired, so it will not double load a second pellet if you happen to cock the gun twice. The gun comes bundled with 1 magazine and a Gamo 3-9x40mm scope with mounts.

The list of reasons why we like the gun is very long, but the short version is, it's considered the most powerful multi-shot break-barrel airgun capable of producing over 30ftlbs (foot-pounds) of energy. The inertia driven magazine prevents double feeds and gives you the ability to single load pellets if you want to change the type of ammo you are shooting. The fiber optic sights give you the option of not using an optic and the RRR (Recoil Reducing Rail) removes 99.9% of the recoil transmitted to the scope.

To sum it up, it has speed, power, accuracy and cutting edge technology, all in one awesome package.

This rifle is a magnum powered break barrel rifle, so it will be harder to cock compared to a lesser powered rifle.

If you are shooting an alloy or lightweight pellet, it will be traveling at supersonic velocity. This means the pellet will produce a sonic crack as it goes down range, so the Whisper Fusion Sound dampening system will not be as effective as with a heavier subsonic pellet.

Other Gamo Swarm magazines are not compatible with this rifle - only the Magnum Inertia fed magazines. 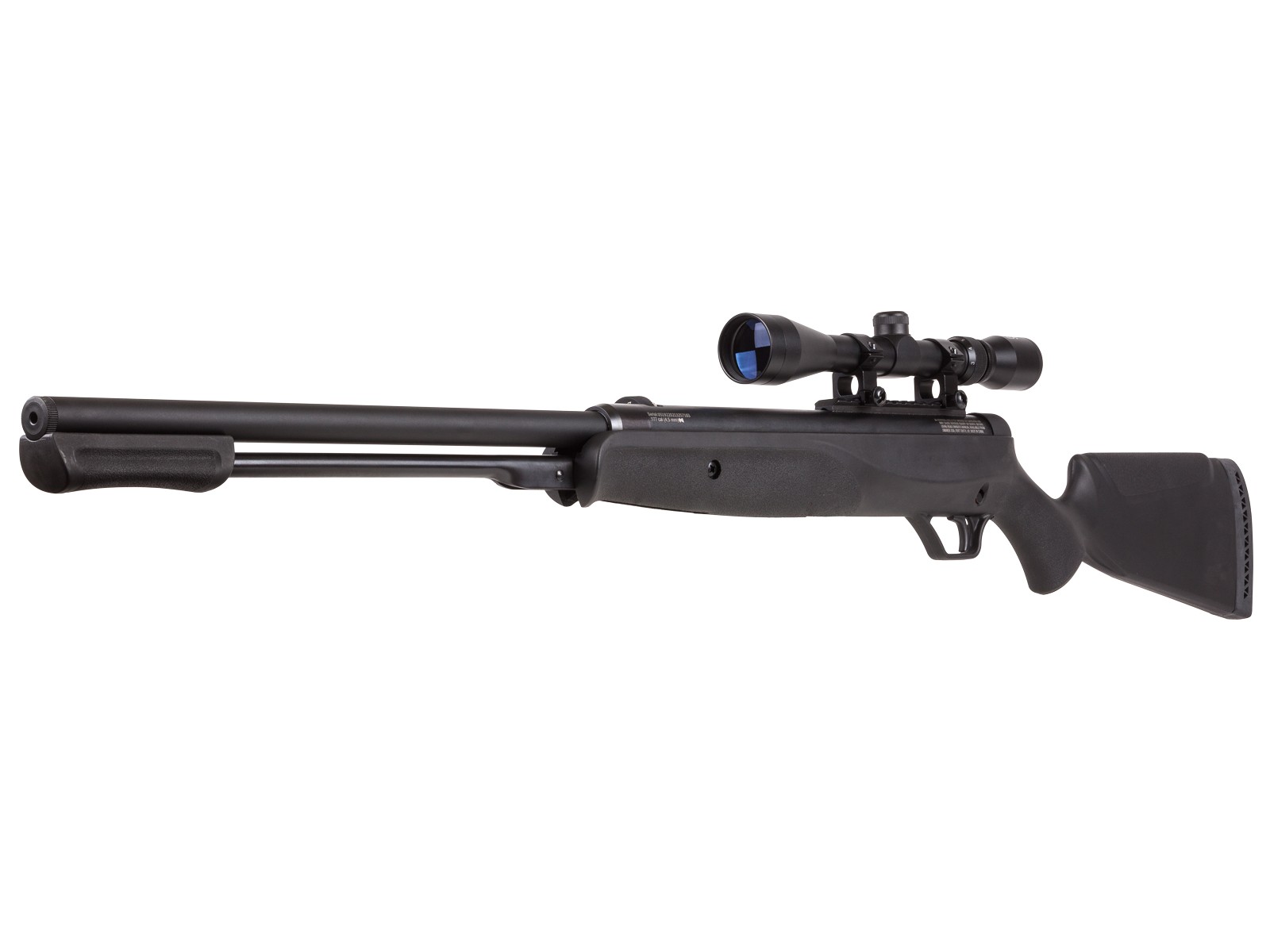 Reliable, repeating spring powered air rifles are now a "thing" with more and more of them appearing on the market. So how do you make one that stands out from the crowd? Give the buyer a lot of value for the money, and don't make it a break barrel rifle.

The Umarex Synergis is one that stands out from the crowd. It is a multi-shot underlever rifle, with a manual safety and a fixed barrel that is shrouded for sound suppression. It also has a 20mm picatinny rail to mount the scope instead of the normal 11mm dovetail rail found on most air rifles.

The Synergis is available in both .177 and .22 caliber with the magazines holding 12 round and 11 rounds respectively. It is also bundled with a 3-9x40 scope and 2 magazines.

First and foremost, it is accurate and quiet. These 2 attributes can be tied to the shrouded barrel that are normally found on only pre-charged pneumatic air rifles, not spring powered ones.

It has a manually activated safety, it comes with 2 magazines, and depending on the caliber, it has either 11 or 12 pellets on hand ready for quick follow up shots. The underlever cocking system has a hand grip near the end of the lever for added grip when releasing the lever, and cocking the gun.

The Synergis has a patented ABT (Airflow Boost Technology) auto indexing hollow pellet probe that pushes the pellet out of the magazine and into the barrel, then directs the airflow directly into the rear of the pellet when fired. Lastly, the picatinny rail mounts the scope securely to the rifle and prevents any movement of the scope.

It may not be suitable for smaller stature shooters as it is an adult sized airgun that is almost 46 inches long. It weighs over 9 pounds once the scope is mounted, and the magazine is installed, so it's not suitable for all shooters.

The scope that comes with the rifle is not the best quality, so expect to replace it eventually. You'll find the magazine is held in place only by the bolt probe, so if you cock the rifle with the right side facing down, the magazine may fall out.

Umarex also placed the manual crossbolt safety on the side of the stock, not in or near the trigger guard.

What is a Multi-Shot Underlever?

A multi shot underlever air rifle uses a spring powerplant with a lever under the barrel as a cocking mechanism and includes a rotary magazine that cycles forward every time you cock the rifle. The advantage of a multi-shot underlever is the fixed barrel - which prevents any pellet mis-alignment within the barrel - allowing the projectile to exit the barrel as smoothly as possible.

What is the Most Powerful Multi Shot Break Barrel?

The Gamo Swarm Magnum, in .22 caliber, can produce over 30 FPE (Foot Pounds of Energy) and is considered the most powerful multi-shot break-barrel airgun. With a maximum velocity of 1300 FPS with alloy, 975 FPS with lead, the Magnum setup of the swarm is powerful and perfect for hunting small game and pests.

What is Gamo Swarm?

The Swarm is a multi-shot break barrel platform from Gamo that has been available in a variety of setups: Fusion, Whisper, Maxxim, Magnum & Whisper. Each platform offers different options from sound suppression, calibers and power. Some of the Gamo Swarm platforms offer inertia-fed magazines, like the Magnum, which eliminates the need to manually reload after every shot. 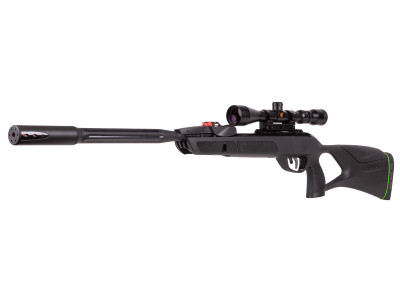 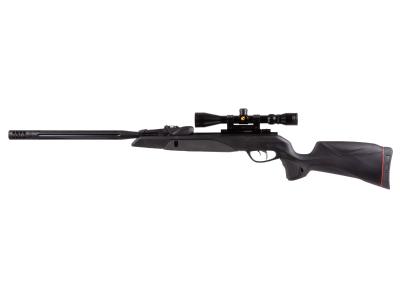 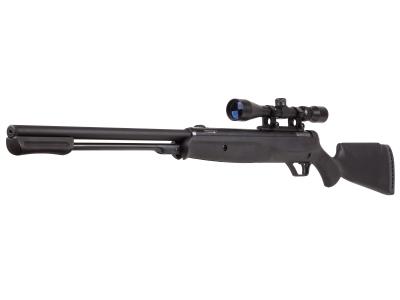 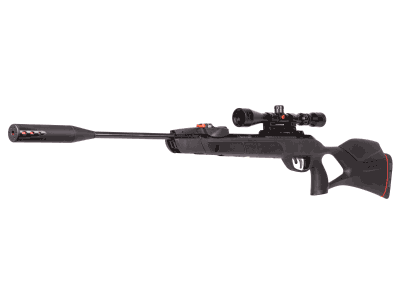 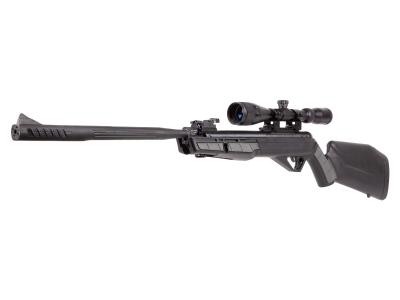 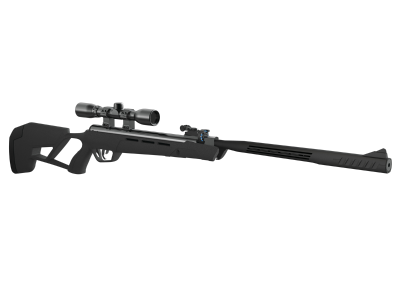 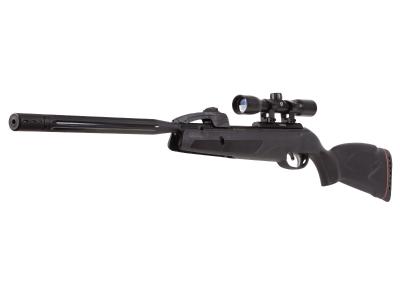 USD
Does not include shipping and tax
Checkout
×
×
×
×
Cyber Monday SALE - 11% off* | Use code: CYBERSAVE11 at checkout! View Deals