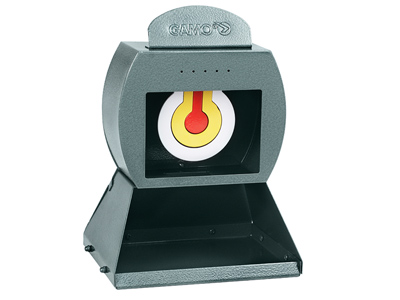 Things I liked: I hope SOMEHOW 'PA' can incorporate yesterdays AND this updated review, because this IS an UPDATE to the review of this item I just did YESTERDAY! Because I took the advice of a SEVEN YEAR OLD earlier today, I now LOVE this thing... LMSBO! Read below for more.

Things I would have changed: Well, I do not know if the FIRST review will get out there to read, but my MAIN complaint was how, even when hitting the red, and JUST the red target, the darn yellow, and sometimes BOTH yellow & white lights come on, and sometimes the red won't even light... grrrr. I mentioned how I was THINKING about how I might try and somehow DESENSITIZE the thing, as I THINK the SHOCK of the pellets is causing the lights coming on even when I do NOT hit the yellow and white rings. Earlier today (about 10am) I am yakkin' to a friend of mine about my earlier review, telling how slow-mo-cam shows that I just hit the RED LED TARGET, but other lights come on, with much elaboration about how I THINK the other lights are just TOO sensitive or such. Her seven year old girl is intently paying attention, and little girl says, "Excuse me, but if you want JUST the red light to come on, why not just turn off the yellow and white light? Can you switch them off?" READ BELOW!

What others should know: FROM THE MOUTHS OF BABIES! I have installed THREE tiny micro switches, one for each set of LEDs. For general shooting, and also to keep my sanity (I KNOW I JUST HIT THAT DARN RED TARGET, DANG IT!!!), I just have the RED LED switched to the on position, other times either one or both of the other two. I have definitely verified that you really have to HIT the RED target for the LED to light. For some reason, the SHOCK of the pellet hitting elsewhere does NOT turn the LED on, and now I LOVE this thing. I'm gonna contact 'GAMO' to suggest that maybe they should have another version where just the ONE RED LED lights up, or install separate LED switches for the lights. Seriously, this would lend itself very well for shooting at WAY over 10 meters or more, because you are basically REALLY wanting to get your aim very accurate for small game hunting. So, when that ONE RED LED lights up, you KNOW you are doing something right with your shots... RIGHT? And for THIS one, make a LARGER LED!

Things I liked: Good concept; however, see below.

Things I would have changed: Shipping this item is a huge embarrassment for Gamo: no instructions are included; the switch was in pieces and could not be reassembled (substituted my own); one nut holding LED's was rattling around and the other was loose; accessing the battery compartment requires disassembly; target rings required lubrication to swing freely.

What others should know: Save your money and buy a different target.