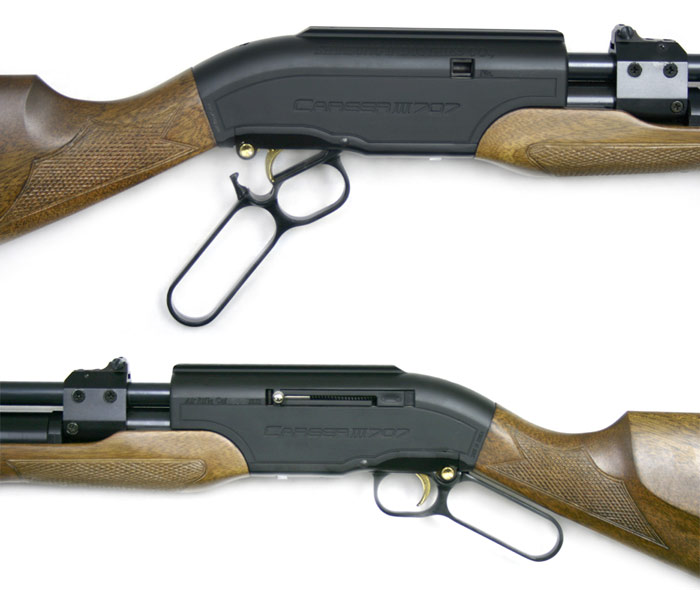 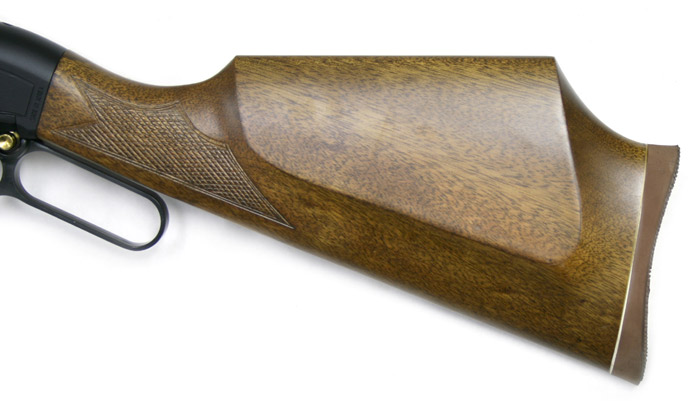 Share
Item details
CA70722KSingle [PY-1199-2141]
Think of all the pests you can eliminate with this super hunting gun!

The Career 707 blew the doors off the PCP (precharged pneumatic) market when it was introduced in the US in the 1990s. Even after all these years, this airgun continues to be a favorite among hunters.

The variable power levels give you a huge range of energy for taking small- and medium-sized game at distances previously reserved only for firearms. The gun is manufactured by Shinsung, a Korean company that knows what hunters need and want, because Koreans have been using the Career far longer to hunt all types of game.

The Monte Carlo Indonesian hardwood stock has a raised cheekpiece and checkering on the wrist (directly above the lever). The forearm also has checkering to ensure a firm grip when you're in the thick of things. The lever-action cocking mechanism works quickly, smoothly and effortlessly as you chamber each pellet from the multi-shot magazine.

The number of shots you can load in the mag depends on the length of the pellets, but most people load about 6 pellets (although you can fit 10 Crosman Premiers!). Longer ones take up more room, so you won't be able to load as many. Extra mags are available for pre-loading so you always have followup shots. The rifle cannot feed pointed pellets, so select either wadcutters or domed ammo.

The built-in manometer (air pressure gauge) shows you how much air remains in the built-in air reservoir, located directly below the barrel. This air rifle was the first to offer adjustable velocities with its integral power wheel. Adjust the wheel to accommodate heavy or light pellets, long or short distances and the type of game you're shooting. The gun adjusts to YOUR needs instead of the other way around! Max velocity is 1,000 fps in .22 cal. and 850 fps in .25 cal. You'll get up to 14 full-power shots.

The two-stage trigger can be adjusted to your shooting preference. It comes with sights, but the Career 707 is known for its accuracy, so you'll want to seriously consider mounting a quality scope on the 11mm rails. A hard Plano rifle case (PL1531) is strongly suggested.

Don't forget to click on the AMMO link for a list of suggested wadcutter and domed pellets. Check the ACCESSORIES link for hand pumps, scopes, fun targets and safety gear you'll need.

Share
Item details
CA70722KSingle [PY-1199-2141]
Think of all the pests you can eliminate with this super hunting gun!

Nedds to be reset for uk law

at last a heavy duty .22 repeater with very smooth action. because its a carbine its light in weight but for the hunter it has all of the power that you would ever need. use the heavier korean.22 pellets for hunting they have tremendous shocking power. don"t dry fire this gun in the house- very loud noise -make sure you do it outside if you have too.

Seemingly the only thing Shin Sung ever does is improve on their products. I have owned a Career 707 Carbine with the #3 stock for a while now and I'd have to say that it is probably one of the very most accurate projectile firing devices on the planet! It will shoot alongside (if not outshoot) the very most accurate of the many quality .22 rimfires I have owned, with 1/2" groups being very ordinary at 50 yards. Simply outstanding! For fun, my friends and I shoot at boards drilled out to accept 209 shotgun shell primers ...an interesting "action target"... and hit these rather small primers with almost boring regulariy at up to 75 yards! Also shoot at 1" or smaller "Shoot 'N See" target "pasters" which are affixed to old paperback magazines which are draped over twine strung between two trees ...and when we're finished shooting we see who can "cut the twine" ...which is normally accomplished on the first or second try. Incredible accuracy!

Nothing whatsoever...while Shin Sung frequently changes the style of their stocks and tank configuration, the quality and accuracy remains consistant, judging from the several variation I have used. Only seems to get better!

As I told one of my friends (who was in the process of purchasing yet another high dollar precharged airgun that was more than twice as expensive, though he already owned a Career 707 Carbine)..."You can spend as much money as you like on features and cosmetics, but when it comes right down to it there is nothing on the planet that will outshoot the Careers". $1200 spent later, he wholeheartedly agreed! Variety is the spice of life and while there are other airguns that are possibly more asthetically pleasing to some folks and are certainly a joy to own and shoot (can you ever own too many???), I honestly don't believe there are really any airguns out there that can come close to topping the Careers (any version) as far as accuracy, quality of build, and overall user satisfaction. I've been shooting precision adult airguns since the late '60's and I'd have to say that the Career 707's, in any version or configuration, are certain to please the very most discriminating shooter!