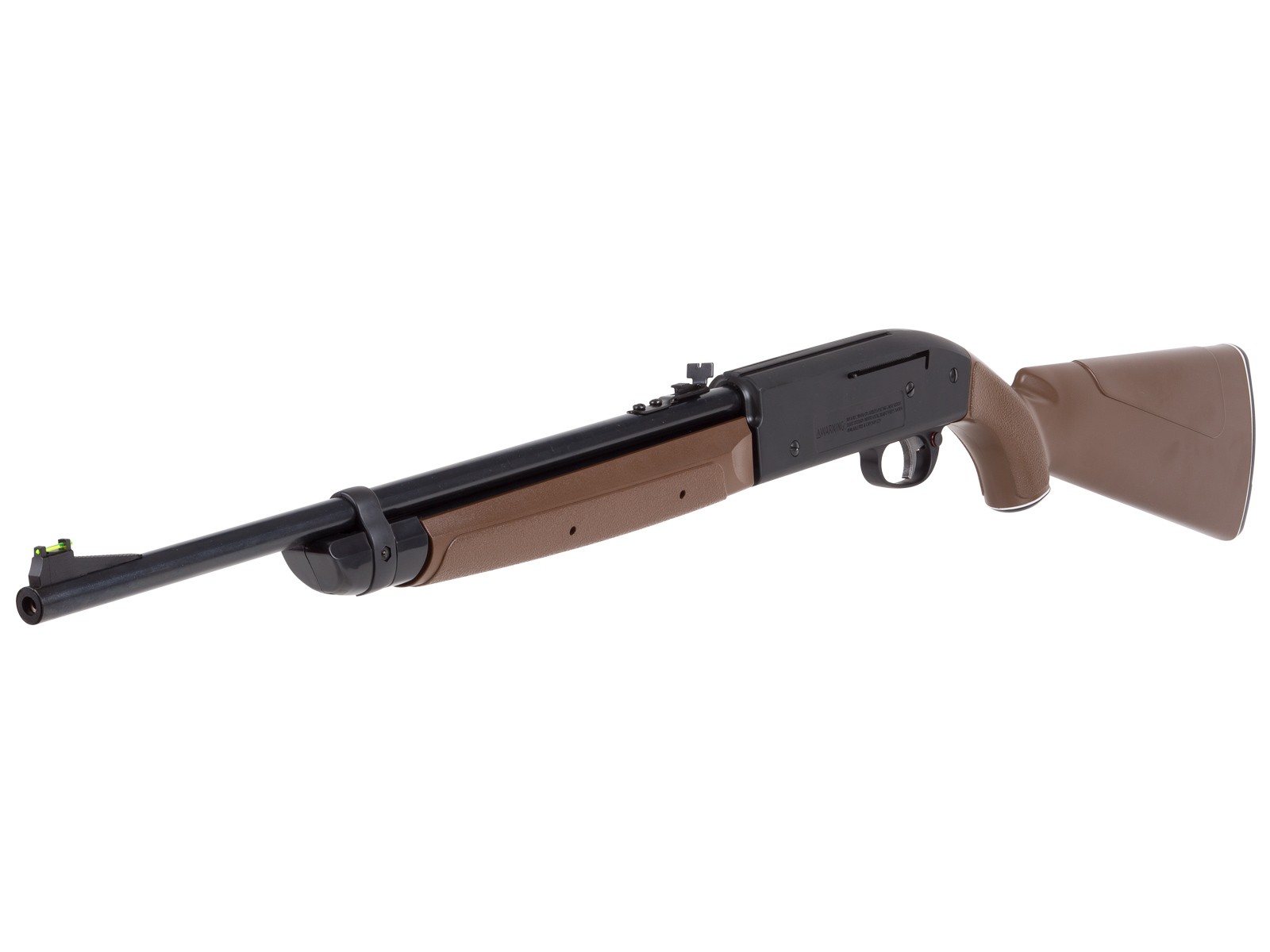 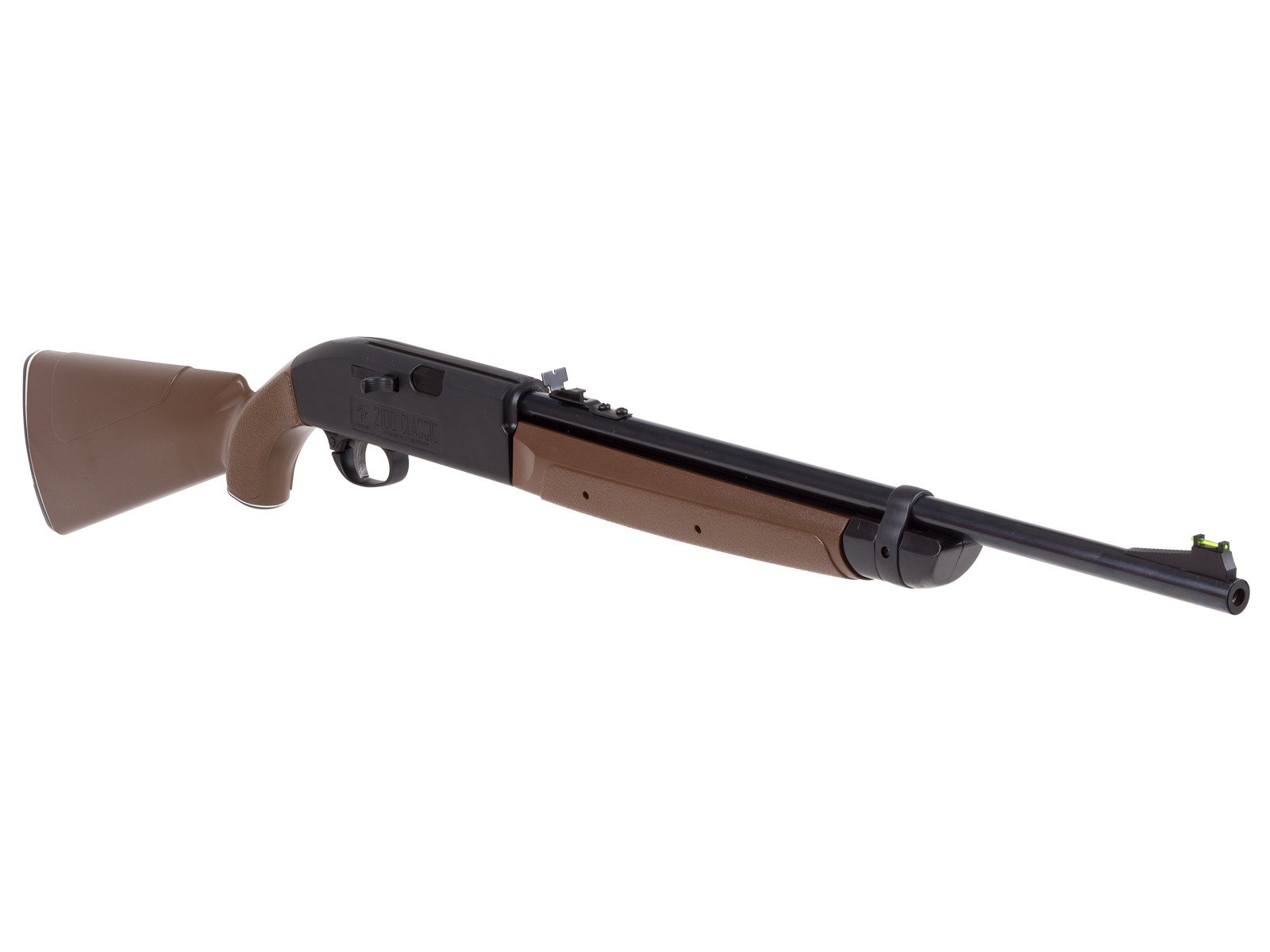 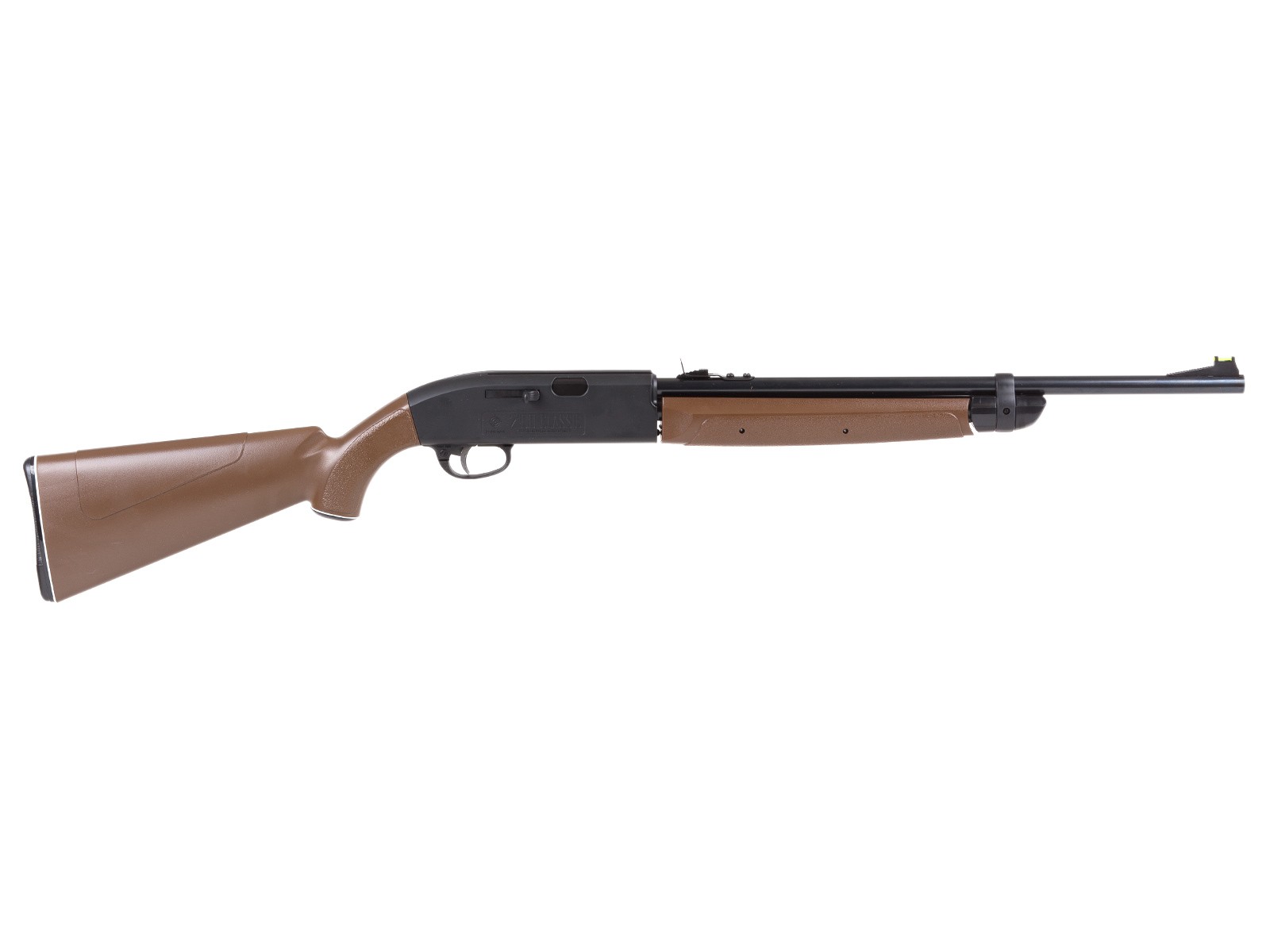 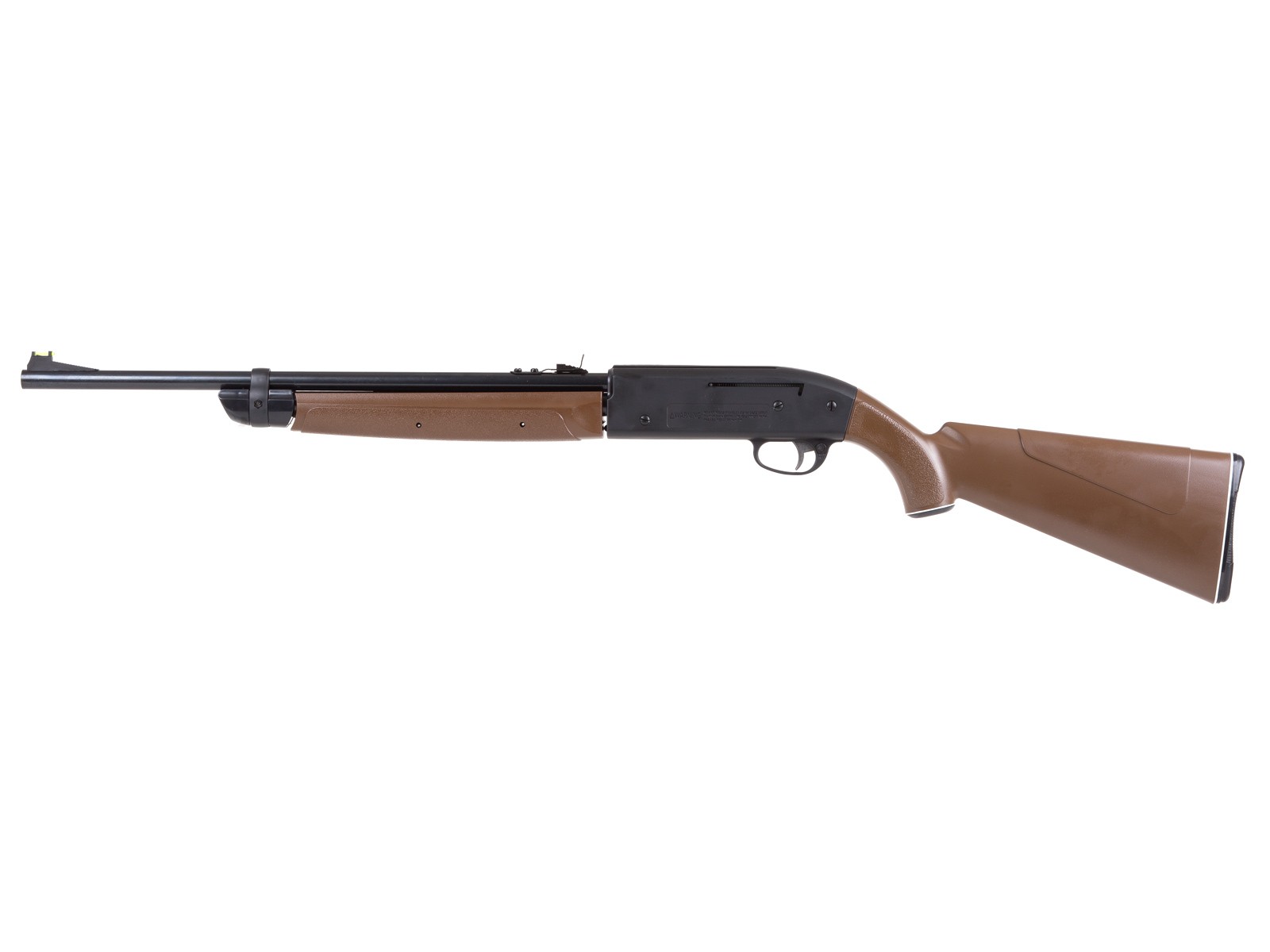 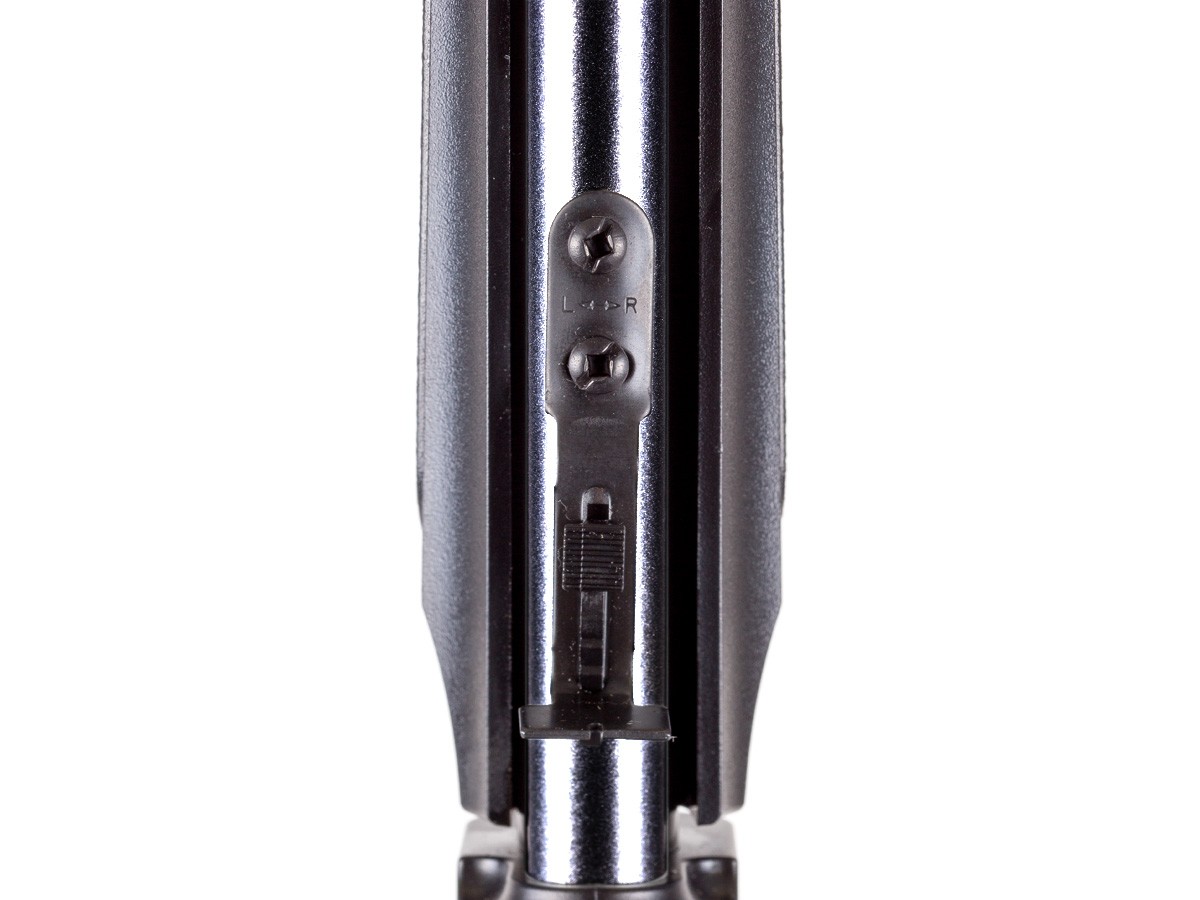 *B.B. Pelletier tested the Crosman 2100B air rifle for our airgun blog (click link elsewhere on this page). Using open sights, this gun delivered 10 Crosman Premier pellets (Premiers sold in the cardboard box, not the metal tin) into a 0.539" group at 10 meters. If this gun retailed for $300, that wouldn't surprise anyone...but it's a fraction of that. If you enjoy accuracy combined with variable power, get this gun!

Pump the 2100B from 3 to 12 times, depending on the distance you're shooting. Light in weight, this full-size powerhouse launches pellets up to 725 fps and BBs up to 755 fps.

Feels like a classic Pellet gun from the 90s. Metal trigger and action housing, plastic stock and forearm. Solid metal Dovetail mounts, no flimsy two piece plastic being clamped together. I sighted this gun in with Wadcutters at 10 yards for shooting English Sparrows. Using a Winchester 4x AO Scope, I was able to put 3 in the same hole once it was sighted in. The trigger pull is long, but smooth. I then moved the target out to 25 yards and found it shooting 2 inches high using GREEN Barracudas(Lead Free, Tin/Zinc). I adjusted the scope, and was able to kill the target once at 25 yards standing. It was putting them exactly where the cross hairs were when the trigger released. This gun is accurate! I then moved the target back to 10 yards, sparrow range. The gun put 3 GREEN Baracudas in the same hole, one inch low at 10 yards. GAME ON!

It's harder to pump than I hoped. I got this for my parents to shoot. My mom could only get to 3 pumps, but this will help her build some muscle....Dad said 8 pumps were no problem. I was doing all of my shooting with only 5 pumps. I pumped it up to 12 and shot the GREEN Baracudas(~5.5 grains). This gun has been shown to be 700+ FPS and it was definitely quicker than my 1300KT full mod 14.6".

The weight is a pleasant surprise. It's not at all heavy, but it feels much more like a real rifle than any of my other inexpensive .177 pumpers (Crosman 1000, Winchester 1977XS, Barra Sportsman 900, Umarex APX NXG, Daisy 880 and Umarex Strike Point), due primarily to the use of metal pretty much everywhere but the forearm pumper & buttstock. Even the trigger is metal! When it comes right down to it, I prefer this MUCH more than the 'new and improved' Crosman 1000 Legacy. Basically, they're very nearly the exact same rifle, with the major differences being the side-loading port -- the one here is excellent, but the one on the 1000 is awkwardly awful -- and the high quality synthetic materials used almost everywhere on the 1000 Legacy, replaced mostly with metal on the 2100. Both are excellent, inexpensive and accurate air rifles, but the 2100 just seems to me so much nicer than its newer cousin. Great shooting air rifle!

Why 12 pumps? Every pump on this otherwise sweet air rifle (or its newer cousin) is tougher than those required for its competitors (see above) and more are necessary (12 instead of 10) to reach full power. With lead pellets, the Crosman shoots no harder than the competition, yet it needs more pumps to do it! This tougher pumping at all power levels and those extra two pumps necessary to reach max power serve no useful purpose: it makes no sense. Still, the pumping isn't exactly hard; it's just harder than the effort necessary to charge the others, with the possible exception of the .177 caliber Umarex Strike Point, which can be a bear to power-up past pumps three or four. The 'adjustable' rear sight (same as Legacy 1000) is not nearly as nice as those used on the others, either -- adjusting for windage is MUCH more difficult with these sights, although it can be an extremely easy-to-aim and accurate shooter once it is properly adjusted. I wish it was all black. :-)

While I prefer the all-black color scheme and all-weather synthetic material used on the Legacy 1000 (and would love to see this rifle in all black with the same material on the pumper arm and buttstock), everything else about the 2100, especially its widespread use of metal, excellent side-loading port and extra heft, gives me a much stronger impression of overall quality. I prefer my 2100 Classic to the 'improved' Legacy 1000 by a long shot! It's inexpensive, highly accurate with a properly adjusted rear sight, has a nice weight & feel and the handling is great. It's comparable in performance to most of the other .177 caliber variable pump pneumatic air rifles under $100.00 and would be perfect for pretty much any and all airgun enthusiasts, from mature yet inexperienced younglings to grizzled veteran adults and everyone in between. WELL worth the cost.

i'll try yo keep it simple; price & weight; just need to shoot it more, & with different pellets to see who's the happiest

easier load for "port-siders"; add something of a support for pumping-with scope- afraid i might break off stock; eliminate "bb"

kid pushing 76, after 5 pumps it gets stiff; did put drop of crosman oil on piston