When it comes to hunting, the biggest factor about what airgun to use, and which caliber is best greatly depends on the game you're going after and the attributes of that game (size, weight, hide toughness, skull thickness, etc.) Here we break it down a bit: 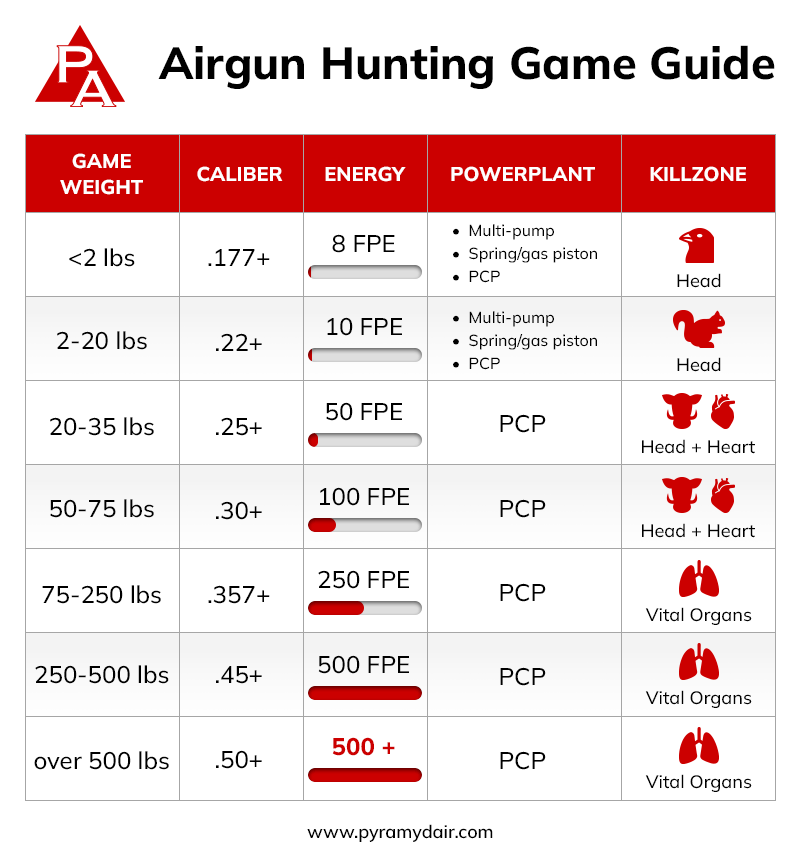 Animals with small bones weighing less than 2 lbs can be taken with a .177 caliber pellet from an airgun that can produce at least 8 foot-pounds of energy. This would include quail, dove, pigeon, and grouse. The best shot placement for this type of game would be the head, to minimize damage to the meat.

Small game with heavier bones and weighing 2-20 lbs, like squirrel, prairie dog, pheasant, rabbit, hare, groundhog, and turkey, should be taken with at least a .22 caliber pellet from an airgun that can produce at least 10 foot-pounds of energy. These animals can be shot in the heart but should be shot in the head to minimize damage to their meat.

Each powerplant has its advantages and disadvantages. A multi-pump is best used when hunting within 30 yards. They are often lightweight, low-priced, easy to use, and widely available but are less powerful than other power plants.

A spring or gas piston has a range of up to 50 yards. These rifles offer more power than a pump gun and do not require any external air source making them an ideal entry into small game hunting. Some may be difficult to cock, but they can be used for hunting in many locations.

PCP small game hunting rifles have a range up to 75 yards but can push to over 100 yards with more powerful models. These rifles will offer more power but require an external air source and can only be used for hunting in select states.

The recommended calibers for hunting small game are .177 or .22 caliber. A .177 caliber pellet will leave a small hole in the target minimizing damage to the meat, but only works well on very small animals. And a .22 caliber pellet is harder hitting than .177, and can take larger game but leaves a larger hole in the target.
Best Small Game RiflesShop All Small Game Rifles

The majority of animals in the medium size range are predators more than game. A few game animals fit the medium game category and large game category, depending on their size at the time of the hunt. Medium game ranges between 20 and 75 lbs.

Predators, like fox, bobcat, and coyote, weighing 20-35 lbs require 35-50 foot-pounds of energy to kill and should be taken out with a .25 caliber or larger pellet.

Game animals around 50-75 lbs, like javelina, small feral hogs, small antelope, and small deer, require 80-100 foot-pounds of energy to kill and should be shot in the heart or brain with a .30 caliber or larger pellet.

Once you get into medium-sized animals, the power needed to kill them goes up and the only airguns that are rated for that power are PCP models. The best effective range is up to 75 yards. Don't forget these rifles need an external air source to refill them after several shots.

The recommended calibers for hunting medium game are .25 or .30, but you can't go wrong using larger calibers. A .25 caliber pellet takes the animal without leaving a large hole or being overpowered, but is not powerful enough for larger animals. A .30 caliber pellet can take animals up to 75 lbs, correct placement won't ruin the meat. It is powerful enough to take out nearly all pests and predators. But, is not powerful enough to take large game. Once your cross-over critters get too big, you'll need to upgrade your airgun.

Too much power really isn't a concern with predators as much as it is game. With game, you want to use the power to get the job done without making a mess of the animal. You don't want the meat ruined with too many holes or contact with lots of lead.

For large game, the power of your air rifle will be more important than the caliber of pellet you use, though the weight of the pellet along with its size and the velocity at which it's shot will determine the punch it will pack. Large game is anything over 75 lbs.

Animals weighing up to 500 lbs, like feral hogs, deer, bighorn sheep, and mountain goats, require 150-250 foot-pounds of energy to kill. Their target zone is the heart/lungs and they should be taken with a .357 caliber or larger pellet.

Animals around 1000 lbs or more, like elk, moose, large antelope, and bison, require 500-700 foot-pounds of energy to kill. Their target zone is the heart/lung and should be taken with a .45 caliber or larger pellet.

Pre-charged pneumatic rifles are the most powerful powerplant in airguns. Big Bore PCPs can produce upwards of 800 foot-pounds of energy, but it's important to select the right caliber and power output for your needs. When it comes to big game, typically bigger is better, meaning a larger caliber and more powerful rifle is going to be what you want. Always pick the airgun with the power you need for the job at hand. And it is recommended that you stay within 100 yards of your quarry for best performance.

Typically, big-bore PCPs only get a few shots per fill before needing to be topped off. While you may not need to carry a spare tank in your pack, it's a good idea to keep a spare tank or portable compressor at camp or in your vehicle in case you need a refill.

The hunting map gives a state-by-state view of the available game.