After a few mixed accuracy results from the first test of the Texan .357 Air Rifle, we were contacted by Texas's favorite airgun company with a few suggestions on what ammo to use. Tyler heads back out to the range armed with new knowledge and new ammo. Let us see if round two is any better.

"Welcome to the Pyramyd Insyder, I’m Tyler Patner. Today we're going to be taking a follow up look at the AirForce Texan in .357, looking at some new ammo, and making it shoot, this the Air Venturi Air Bolt. Let's check it out.

So, we're here with a bit of an update to the .357 Texan purely because back when we did our full review in November of 2016 we didn't get the best accuracy out of it, and we got with the folks over at AirForce to figure out why and with their help what we found out was that we were actually using basically the wrong diameter ammo. We carry a lot of .356 diameter, .357 nine-millimeter ammo, purely because it works best in a lot of the guns we had at the time, the Recluse, some of the Atom, in rifles of Evanix as well, so you got .356 diameter but this Texan really shines with the .358 stuff, so we had to get some .358 ammo. So, we have a 67-grain round ball and 190 grain flat point that we're gonna take out to 45 yards and see how they do in this AirForce Texan, both power and accuracy, so we're gonna head out to the range now and check it out.

Alright, guys, looking over these accuracy groups of 45 yards out of .357 Texan and with this new .358 ammo, obviously those round balls basically one hole at 45 yards, this is absolutely phenomenal and you're talking about a hundred and eighty foot-pounds out of a round ball which is pretty damn good, especially for a .35 .357 caliber gun, and then 190 grain slugs were really impressive as well, about a 3/4 inch group for the three shots that we took, and a 288 foot-pounds of energy power coming out of this gun with those bullets, definitely going to be the option for you long-range shooters or your hunters out there. This is gonna do really well.

So, I told you guys at the beginning of the video that we're gonna show you how to use the .35 caliber air bolts in the 357 Texan and now right now as it sits with the 34 inch barrel, these are not gonna fit far enough down the barrel because of this guy, the threaded adapter here, that actually hits the crown of the muzzle and doesn't allow you to push it in any further, and we really need to get it further back to see the full potential of this. So, right now in the 34 inch barrel, this is only shooting about 200 feet per second, obviously not good enough to do anything serious with, so our friends at AirForce made us a 24 inch barrel that drops right into the .35 .357 caliber Texan and is gonna allow us to use the air bolts, so the question really is a is this still as accurate as the 34 inch barrel with slugs, how accurate is it with the air bolts, and how much power is it putting out with both. So, we're gonna show you how to install this and then head out to the range and see how it does.

So, this is really easy to do, guys. First thing we're gonna do, go ahead and open our bolt that way we'd see the end of the barrel here, and then take the gun flip it on over, really all this is is just removing a couple screws. So, we have a 3/32 Allen wrench here. I'm just gonna go ahead and start at the front and move these screws here. Now this front one, you don't loosen all the way, but we do want to get the end cap off, and it's just easier to take them out, so we take that end cap off and now we get to work on the screws that actually retain the barrel.

There are eight barrel retention screws that we need to remove so let's get to it. Alright, this is our eighth and final screw here and once we get it out, we are just simply gonna pull the barrel right on out and it releases very easily.

Alright, so now we have a barrel-less frame basically, so we're gonna take our 24 inch barrel and you notice we got a couple threaded points here and this is actually exactly going to line up with our holes that are on the frame to allow us to mount this barrel properly, so take the barrel slider on into the frame. Alright, so once you make sure you got everything aligned, we're gonna watch the barrel actually come through right at the back and match up with our valve here in just a second, perfect there. Now we're just going to rotate ever so slightly to make sure that our holes are matching up with the open slots here in the frame itself. So, now that we have everything aligned, we can go ahead and reinstall our screws. Last thing to do is put our end cap in and put our retention screw on. For that, I haven't actually cinched up these screws as tight as they'll go apparently, because I want to make sure everything fits okay first, so now that I know I have everything fit properly now I'm going to go ahead and give those the last little tightening. Alright, guys, so now that we had the barrel installed, you can see obviously a much shorter profile gun basically the same length as all your Condo or SS. Let's head out to the range test some air bolts in it and test the slugs, see what we're doing.

Alright, guys, so talking about our accuracy and our velocity results here for the 24 inch barrel on our Texan SBR, if you will the round ball is obviously still very, very good group out of those guys at 45 yards, basically like three quarters of an inch, and you're talking about a hundred and sixty-two foot-pounds, so about thousand fifty feet per second, a little bit of a drop-off but not too dramatic, where we saw it the most though obviously the 190 grainers a 100 foot per second drop-off coming in at about 750 feet per second, so you're reducing your energy to about two hundred and thirty from about two eighty to ninety foot pounds, but still plenty of power in that .357 caliber. In case you didn't catch that, that second air bolt went right through our target.

Alright, guys, I'm looking at our air bolt here at 30 yards three shots about an inch and a quarter group around 550 feet per second just as fast as any other gun we've got, maybe a little bit faster even, and you're talking about two hundred and forty five-plus foot-pounds out of that air bolt in 35 Cal in this short barrel Texan. That is a lot of power. Now that said, I do want to show you guys real quick how to install a broad head onto this setup because you actually can which is a really neat feature on the short barrel Texan so let's check it out.

Alright, guys, so to put a broad head on this guy, you're gonna want to stop short when you load that air bolt in initially and then take the field tip out, so really easy to do you, just unscrew it there and then we're gonna very carefully, we got these g5 broadheads fixed blade, you can use a mechanical as well, and just place it in there, obviously that's the part you want to be most careful of so you don't cut yourself, then you get one of these air venturi broadhead wrenches that work with just about any broadhead that I've seen at this point at least, go ahead place it on there and then you just screw it in very, very easy to do, then once it's nice and tight, we go ahead take our broad head wrench leave it on top there and just go ahead and push it on down until that insert that aluminum insert is seated at the crown of the barrel, and then we're ready to go and you got one badass looking hunting rig going here. I would hate to be the animal on the other end of that thing.

Alright, guys, that about wraps it up today for the .357 Texan part 2. Obviously, the short barrel has got a lot of merit to it. If you're looking for a more compact big bore hunter, you're still looking at 230 plus foot-pounds out of those hundred and ninety grain slugs and in reality you're only losing about a hundred feet per second even with the 67 Grand round balls in comparison to the 34 inch barrel, so for a 10 inch difference in the overall length of the gun, it's actually not too bad in my opinion and obviously the ability to use the air bolts makes this a badass hunting tool so definitely want to check out next time you guys are around pyramydair.com. If you liked what you saw in today's video, guys, hit us with that like button down below, comment, tell us what you thought about this or what you guys want to see next time, and don't forget to subscribe. I'm Tyler Patner for the Insyder, we'll see you guys at the next one. 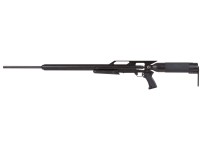 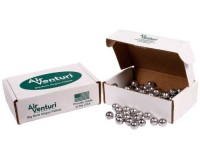 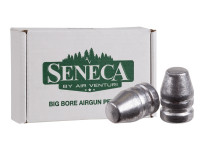 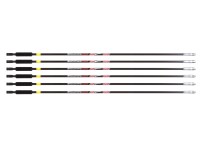 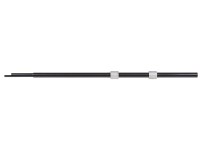 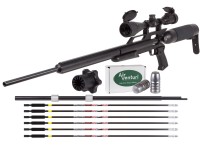