The Marauder Field and Target, the first fully-regulated Marauder, an airgun that gives shooters everything they loved about the Marauder with more shots than ever before.

Welcome to the Pyramyd Insyder, I'm Tyler Patner. Today we're gonna take a look at a new twist on an old classic, the Benjamin Marauder Field and Target in 22 caliber.

Alright guys, quite frankly I don't think I need to go over the Marauder in too much detail other than three significant points on the Field and Target edition, one of those is actually on the regular Marauder as well. There's everything on this gun is basically standard with the exception of the fact that you have a Picatinny breach here, so when you're choosing your mounts obviously know that going in, I like that a lot because you could just take the scope off and put it back on very quickly without having a rezero or do too much work. The second significant change here is the regulator, of course that's going to be the big one, and that's not found obviously in any of the other Marauders or anything like that. Don't know exactly where what pressure it's set at, but I'm assuming we're gonna find that out when we shoot over the chronograph, so we'll have to stay tuned for that. And last but not least, is something that's been in place on the regular Marauders for about the last five or six months, and that's a new barrel design that Crosman's employed, and the barrels that I've shot out of the regular Marauders in that time frame have done very very well and they're very consistent as well. You know one of the things back many many years ago, the Marauder 22 barrels were kind of questionable and I'll be honest with you guys, I think those questions can be answered right here right now. This new barrel design seems to be doing a lot better, so obviously we'll get it on the range and find out just how good it's doing but I'm expecting very good accuracy results. Other than that guys, the features are consistent. 3,000 psi fill, male quick disconnect fitting, shrouded barrels so it's very quiet, bolt action, 10 rounds in 177, and 22 highly adjustable matched trigger. You have adjustable cheek piece, rubber butt pad, wood stock that's slightly redesigned a little bit heavier, I'm gonna be right about ten and a half pounds or so as you see it here, but other than that guys let's just get out to the range and shoot, because I know you guys want to see what this gun can do, so do I. Let's check it out.

Alright guys as I said in the studio, Crosman it's got some new barrels. Now these aren't the Lothar Walther barrels that they're gonna be offering through the custom shop, this is a Crosman made barrel but they're going about it a new way. So these barrels should be much much better and I think the accuracy showed that certainly. Predator GTO is right around one inch, that is actually an inch on the dot for this group, and that's ten shots. You know, certainly hunting capable for those of you that want an on lead option. The Crosman premier domes actually did pretty well right about an inch too. So certainly a hunting-friendly pellet. The JSB 18's pretty good, about three-quarters of an inch. But definitely our best, that JSB 15 point eight nine point six inches, 5/8 of an inch guys, this is a dime right here. You're not gonna get a whole heck of a lot better than that and you know, a gun in this price point to be able to put down a group like that forty-five yards, very good. From a 3,000 psi fill, with the regulated Marauder Field and Target, and those JSB 15.89s, you're looking at about 50 good shots down to 1500 psi where we fell off of that regulator. Now with the standard deviation of 2.1 feet per second this is obviously very very consistent from shot to shot and we're certainly getting more shots than we would have with a unregulated Marauder. A little bit of a downer in the Energy Department, they'll run in there about 24 foot-pounds on that eight hundred and twenty-two foot per second average, but you can crank it up you have all the normal adjustments to the hammer spring and the transfer port that you would on a normal Marauder. So you can really tweak this gun to get exactly the performance you want, but that regulator is certainly doing its job, and very very consistent performance out of this Marauder Field and Target.

Alright guys pretty good results out of the Marauder Field and Target here in 22 caliber. Very quiet, obviously, triggers very clean break, and I know it can go a lot lighter than what it's set at now, so keep that in mind if the trigger is a big factor for you, but a very nice hunting trigger right out of the box. The magazines obviously work well and a 10 shot group at 45 yards that's covered by a dime. Very impressive accuracy out of these new barrels from Crosman. There's not a lot that this gun doesn't have in terms of features especially for the price point. Hitting on that regulator, about 50 shots in this particular version. Now here's one of the things that that's gonna vary from gun to gun. Just because of the features here within the gun, to be able to adjust the hammer spring, being able to adjust the transfer port sizing, and all that stuff that you can do with the Marauder platform, you're actually going to be able to tune this gun kind of how you want it in terms of if you want more power, less power and more shots, or you know more power and less shots, there's a lot of things that you can play with this gun to get it set up just the way you want it, so definitely keep that one in mind, and it's a very easy platform to work with. Tried and true, through and through, and made right here in the USA, you can't really beat that in my opinion. The Marauder Field and Target, two thumbs up for sure, and we're very excited to be able to offer it here at Pyramyd Air so definitely check it out if you're cruising online looking for a brand new PCP in 2018. For the Insyder, I'm Tyler Patner. as always don't forget to like, comment, and subscribe. See you guys at the next one. 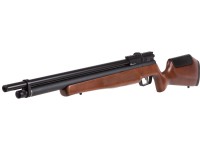