The HW44 is a PCP pistol destined for greatness in your backyard range. Based on the action of their prized HW110, the HW44 gives airgunners the power they want and the accuracy they need for plinking and small game hunting.

Welcome to the Pyramyd Insyder. I'm Tyler Patner. Today we got a brand-new air pistol from Weihrauch in Germany, the HW 44.

So, the HW 44, guys, was announced at IWA Germany this year in 2017 and we wanted to get it in before the end of the year as kind of the final new offering that's come in in 2017 here at Pyramyd Air. The gun is a little bit different than what we saw at IWE but very interesting nonetheless. This is a high-powered pre-charge pneumatic hunting pistol that's got a lot of really nice features. Let's take a look at them.

Alright, guys, it's starting out with our groupings here. At 25 yards, our Predator GTOs did very very well, under a half inch group of 0.45 7/16s or so, very accurate pellet. This is again ten shot groups here, the JSB 15.89s also pretty impressive about 0.6 inches or 5/8 so a nice little grouping there so you definitely got some pellet options. It seems to be favoring the JSP although these Crosman premier 14.3 domes did very well. I was quite surprised by this as a lower cost alternative pellet 3/4 of an inch at 25 yards, you know this is going to be a squirrel's head all day. Moving out to 45 yards, really testing the accuracy at long distance of this HW 44 pistol the GTOs, I was a little disappointed after that grouping at 25 yards, just barely under an inch here for 10 shots decent spread. You're still going to be able to hunt with this at that distance with those GTOs. The Crosman premiers put down a very nice group except for two little Flyers up top there 8 out of 10 in about 11/16s inch group, but overall 1-inch for 10 shots and probably our best pellet out there 45 to JSB 15.89 7/8s inch group right here for 10 shots, very accurate pistol, very impressed out of this gun. At 45 yards, you're definitely gonna have both the power and the accuracy to go after small game with this guy, with the JSB 15.89 zero looking at an average feet per second of about 690 or so which is pretty good. It's about 17 foot-pounds with those JSB 15.89 and again very, very consistent on that regulator. You're gonna get about 15 or 16 shots from 200 bar with a very tight extreme spread and obviously a very good standard deviation. The HW 44 is making very good use of a very small air capacity with that regulator.

Alright, guys, pretty impressed here with the HW 44, very accurate, very consistent chronograph numbers, super smooth operation, and obviously the fact that it's very quiet is a big plus in my world. The ambidextrous grips and the fact that you can swap everything over it is very nice in my opinion as well. A couple gripes though I'm not a huge fan of this kind of magazine retention lever system. It just makes getting mags in and out a little bit clunky almost, but other than that the gun really functions well. Again, I'd like to see a quick disconnect, you know, fitting on these guns, but I get it. You know, fill probe is whatever it is and at least they give you that fill port cover there to keep dust and debris out of the gun, but overall, I mean, those are very small gripes when a gun's doing sub half-inch groups at 25 yards and under 1-inch groups at 45 yards. This is a pistol remember that guys so off the bench of very impressive results here for the HW 44 and one you guys are definitely going to want to check out. The high price point is well justified in my opinion if you are looking for something that is going to be able to hunt or target shoot accurately in a pistol format so check it out on PyramydAir.com. For the Insyder, I'm Tyler Patner. As always, guys, don't forget to comment, like, and subscribe. We'll see you at the next one. 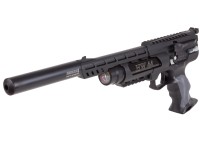