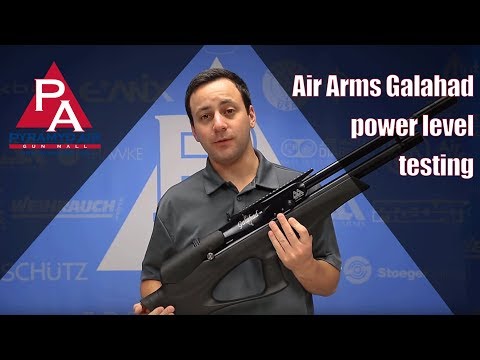 Tyler was just about to box the Galahad back up for its return trip to joy old England when he realized he promised to run this airgun through a test of its three different power settings. Boy, are we glad he did!

Hey guys welcome to the Insyder I'm Tyler Patner. Today we're gonna take another look at the Air Arms Galahad. You see I've had this gun at my desk for maybe uh wow since we reviewed it basically. I've been using it for pest control you know around the house, I've been shooting it here on the range, been doing a lot with it and it's just a fun gun that I really enjoy shooting. But I realized as I was packing it up to send it back today that we promised you guys a video doing medium and low power shot string results. So we are gonna head out to the chronograph make sure we get you guys those results. So let's head out and see what it does.

Alright guys so we came out here to the range and I figured you know what doing the chronograph testing just is not enough. You guys need to see if this gun's accurate on that medium and low power setting. Now I really don't expect it to be super accurate all the way at 45 yards forward and shoot it at that distance anyway on low power. I expect medium power to still be pretty good with these JSB 18s but I'm certainly expecting that that low power is gonna fall off considerably, you want to use a lighter weight pellet so. Let's do some shooting and see what happens.

Alright guys, down here 45 yards we'll check out our group. The medium power group at about 22 foot-pounds for five shots still do a half inch, does about the same thing that the gun does on high power. So very good grouping. Then dropping it down, the low power though obviously, things opened up considerably with our five shots landing in about an inch and a half group low. But what I think is really interesting is between that medium and that low setting if we're using our whole point at the center of this target, you're looking at about just over 23 inches so almost two feet of drop between that medium and that low power setting. And obviously with that group opening up this is gonna make that low power setting really and maybe a 10 to 20 yard setting for most folks. You know a basement usage type of thing or close range in the backyard so. A very interesting results so definitely still viable on that medium power for small game hunting and all that so. Obviously, the Galahad has got a little bit everything, now let's head back up to the range and chronograph, and you can see how many shots we can get.

Starting with the medium power results, you can see we're writing about 22 foot-pounds with those JSB 18 grain heavies. And you're talking about 60 shots with you know sub 10 foot per second spread. It's really impressive numbers off this regulated Galahad and now for 250 bar fill you know to be able to use that down to about 125 bar, it's gonna give you plenty of shots. This is gonna be perfect for maybe backyard pest control or if you're in a tight space, maybe in a barn, and you don't want to punch through small game, and you know going through a roof or something like that, this medium setting is gonna be perfect for you. And on the low power side at roughly 400 feet per second, you know only six foot-pounds of energy this is gonna be your basement plinking mode or maybe even blinking in the backyard with it at short distance. Gonna give you a ton of shots on a fill over 140 good shots on the reg and obviously because it's a little lower powered while the reg is set right around 125 130 bar, you're gonna be able to shoot it a little bit lower with still pretty good consistency. So we shot it down to 100 bar before we really started to see some drop-off there. But again about a 10 to 15 foot per second spread. There's not really a trend one way or another stays right around 7 or 390 or so for the entirety of the string which is just super impressive, and obviously if I was gonna be using this more frequently on that low power setting, and probably opted for a lighter weight pellet, but overall very impressive results out of the Galahad. Alright guys, coming back in from the range, I'll tell you my thumb is a little bit sore from cocking this gun so much, but you guys saw it for yourselves, about 60 good shots at about 22 foot-pounds on that medium setting and about 6 foot pounds worth of energy and 140 plus shots on low power. Certainly makes the Galahad one of the more versatile rifles on the market. We already know it does about 45 shots at 32 foot-pounds on high power with those JSB 18s but to be able to go you know to 22 and then all the way down to 6 as well, I mean this is this gun does it all. If you want to shoot in the basement during the winter, if you want to go take, you know, pigeons and don't want to worry about overpenetration, I mean you got a ton of options with the Galahad. And really puts it at the top of my list for one of the nicer guns and that high-end PCP market especially on the bullpup side so. Give it a look on PyramydAir.com. For the Insyder, see you guys at the next one.