I have a certain default I established years ago when I began writing about the use of airguns for firearms training, and one specific model has come up more often in my articles than almost any other air pistol, the Umarex Beretta Model 92 FS. It is based on the long established Beretta Model 92 platform, arguably Beretta’s most famous and universally-recognized handgun. And well it should be, since it has been our nation’s standard issue military sidearm since 1985.

The Model 92 FS airgun was introduced in 2001 and was one of the first high end, multi-shot, pellet-firing air pistol from Umarex. Aside from a handful of single shot airguns, the Umarex Beretta Model 92 FS was also my first multi-shot, pellet-firing, air pistol; and a decade and a half later it is still one of my personal favorites, and remains one of the best built, best looking pellet guns on the market.

The latest Umarex Beretta model is the 92 A1, introduced in 2015. The new blowback action airgun has the rounded triggerguard design, integral dustcover accessory (Picatinny) rail, and a unique to the airgun, selective fire switch. This is a very interesting alteration to the Beretta design, but aside from shooting out a whole magazine of BBs in 1.5 seconds, it has little to do with the features I favor for handgun training exercises. The 92 A1 is also available for a short time in a limited 25th Anniversary Desert Storm Editon of 750 guns, featuring a weathered finish and the words “Desert Storm” and a profile of the M1A1 Abrams tank on the slide.

The question I have had to answer most often in recent years is, “What is the best choice for training with an airgun before stepping up to a matching, cartridge-firing handgun; BBs or pellets?” You would be surprised how many first time gun owners, and law enforcement and military trainers have used airguns over the years, but the BBs vs. pellets question is a tough one to answer. From a purely objective point of view, pellet guns (handguns) have always been superior in velocity and accuracy to BB guns. The little .177 caliber steel balls are simply not capable of matching the performance of a 4.5mm lead (or alloy) pellet fired from a rifled barrel. Both are the same caliber, 4.5mm is .177 caliber but the distinction with pellet guns is commonly used. The main reason is that pellets, not being limited to a spherical shape, can be designed to achieve greater velocity and accuracy for target shooting, (or hunting small game. One reason a pellet rifle is considered a good addition to modern survival gear).

The BBs vs. pellets competitors

The new Umarex Beretta 92-Series blowback action magazine-fed BB model, and the earlier 8-shot rotary magazine pellet model, are a perfect match-up to challenge the standing belief that pellets are superior to BBs, (even if the answer is very likely going to be the same as always). First, let’s take a close look at the contenders, and how they stack up against each other for features and handling. 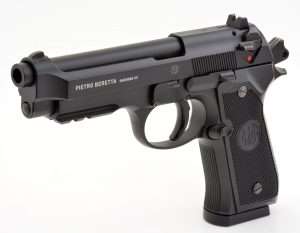 The Umarex Model 92 A1 is a variation of the cartridge firing Beretta model introduced in 2010 with an integral accessory rail and rounded triggerguard, and this is the air pistol pictured above, not the 9mm model! For handling, the 92 A1 provides the exact feel and operation of controls as the cartridge-firing model. The blowback action airgun is perfect for firearms familiarization, it has the correct thumb safety, slide, and magazine releases, the same white dot sight design, and reloads with full-sized CO2/BB magazines.

The DA/SA trigger works identically with the first round fired in DA and the slide cycling back after discharge to cock the hammer and chamber the next BB. You can also cock and decock the gun manually. Capacity for the 92 A1 is 18 steel BBs. The Model 92 A1 9mm holds 17+1. (Most Beretta 92 series models have a 15+1 capacity. The 92 A1 and M9 A3/M9 A3G have 17 round magazines).

The latest Model 92 FS is virtually unchanged from the original 2001 Umarex Beretta pellet model design. Today there are more options for finishes, grips (including checkered Beretta hardwood grips), and accessories such as optics that can be fitted with an added top rail. The 92 FS has the feel, weight, balance and look of a 9mm and it has a DA/SA trigger. However, there is no blowback action, the CO2 goes inside the grip frame, the 4.5mm pellets go into an 8-round rotary magazine loaded behind the breech, and in order to fire single action, the hammer has to be manually cocked for each shot. So for a “real gun” experience the 92 FS comes up a little short of the new benchmark set by the 92 A1 BB model. It’s a fine line in the sand.

Basically these two are evenly matched, both using a single 12 gram CO2 cartridge and having equal handling and trigger designs. It all comes down to the ammunition choices and the superiority of a rifled barrel (92 FS) firing a pellet, vs. a smoothbore barrel (92 A1), sending a .177 caliber round ball toward the same target at the same distance.

In Part 2 the ammunition choices and the BBs vs. Pellets Shootout