Here’s a sporting pellet pistol that can also be used for informal target shooting. It has fully adjustable sights, a single-stroke pneumatic powerplant, a nice trigger and it sells for less than $50. It’s the Marksman 2004 pistol! 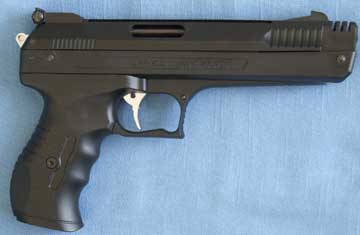 Marksman’s 2004 single-stroke pneumatic pistol is a direct copy of the HW 40 PCA/Beeman P3.

Made in China
Let’s get this out in the open from the start. This pistol is made in China for Marksman. Marksman is based in Southern California, where they build many of the guns they sell. The Marksman 1010 spring-piston pistol is the oldest and most famous of all the guns they make. Some day I’ll write a report on the 1010, but today we’re looking at the 2004.

One more thing to reveal. This gun is a close copy of the Weihrauch HW 40 PCA, which Beeman sells as the P3. And, Marksman owns Beeman. As far as who did what to whom or is the 2004 just as good as the P3, I am not qualified to say. Yes, there is a lot of intrigue in the airgun business, but I try to stay out of it if I can. I’m just interested in this pistol on its own merits.

It looks like high quality!
Don’t underestimate the Chinese as manufacturers. If they have a good design to begin with, and if the factory can overcome some cultural hinderances, they can make products as good as those of any other country on this planet. Where they fall short is in a cultural belief system (no doubt the result of Communism) that “good enough is all it takes.” When that belief system runs the show, things go downhill fast. Some Chinese airguns are so laughably poor that they are a comedy of errors and deserve the scorn they receive from the rest of the world for making those airguns.

In other areas, the Chinese have now set the world standard. Optics, for instance. Most sport optics (scope sights, lasers, astromonical telescopes, dot sights, etc.) are now made in China. Most of the world’s finest cameras are either made there or their lenses are ground there, because the Chinese lead the world in lens production. The Europeans and Japanese set them up in that business in the 1970s, and they’ve been expanding the market ever since.

The 2004 pistol I have looks more like a fine camera than it does a typical Chinese airgun. Whoever is in charge of making it is doing things right. There are no voids in the synthetic body, the corners and lettering are crisp, the plating on the bright parts looks even, the pins are all the right size and length (they’re solid, not rolled), all the screws fit and are undamaged, and the lubricant doesn’t smell like a slaughterhouse! These are all the visible indicators that a typical Chinese airgun would get wrong. The only way to tell if the barrel is any good is to shoot the gun. The way to test the powerplant is with a chronograph.

Shooting
I chose two target wadcutter pellets I’ve come to trust for this test. The JSB Match Diabolo is a world-class target pellet, and the Gamo Match pellet, while less expensive, often performs just as well. I shoot 10-meter air pistol competitively, so my experience with both pellets is first-hand. I find pumping the 2004 a little hard, which is probably due to the length of the top part of the gun that’s used as a pumping lever. This is not a gun for youngsters. On the other hand, the pumping effort became smoother and somewhat lighter as the shots increased. Pumping the gun automatically sets the safety – a feature I detest but understand in today’s litigious world. There is no dry-fire feature.

The trigger-pull is slightly creepy (that means you can feel the movement of the trigger through stage two of the pull) but very nice and light at 1-1/2 lbs. The only feature that would make it nicer is an overtravel adjustment. There IS a small screw of some kind in the trigger blade but no corresponding access hole in the triggerguard for the Allen wrench to fit through, so I was unable to make any adjustments.

The front sight is a wide square post that is too wide for the rear notch. It was difficult to obtain a precise sight picture because of little light on either side of the front post. Nevertheless, I managed to group five shots inside three-tenths of an inch at 25 feet when I did my part. That answers the big question about the barrel. This one is very good! The rear sight adjusts in both directions, but the screws lack detents. Pay attention to the scribe marks around the elevation adjustment screw and the orientation of the screw slot on the windage screw to see how far you’ve gone. They move the shot group very precisely.

Evaluation
The Marksman 2004 pistol is a $150 value selling for less than $50! It’s that good. I cut this gun no slack because of the pistol it copies, but this one needed no apologies. If I were Weihrauch, I’d be concerned.