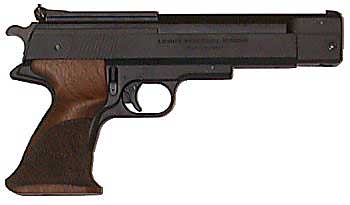 HW75M is a beautiful target pistol.

Taking a different road today to look at a higher-priced air pistol. Don’t fret – I haven’t forgotten the RM-2000 or the Remington Genesis.

I have owned this pistol for about 8 years and, though I never thought I’d ever be able to buy one, an opportunity suddenly presented itself and I did get it. It’s funny when things happen that way, because you can end up owning something you never would have picked for yourself; but through prolonged use, you grow to LOVE it! That’s what happened to me.

No longer a Beeman
My pistol is a Beeman P2, but it’s identical to the HW75M except for the markings and the grip. For many years, Robert Beeman touted the P2 as being as accurate as a 10-meter pistol – without the ergonomics. I am a 10-meter air pistol shooter, and I can tell you that this description is accurate. However, because it was in the same catalog as the Beeman P1, guess which one I bought first? The P1, of course. Why? Because it has more power, and although I try not to admit it very often, I tend to make the same decisions most of you do when buying airguns. Speed sells. Beeman stopped carrying the P2 recently, making the HW75 the only game in town. 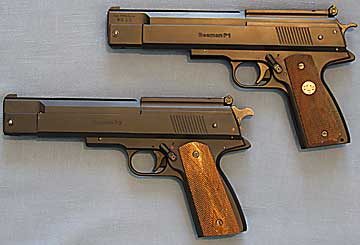 I thoroughly enjoy the P1/HW45, and you can read my blog about it, but the P2/HW75 is a different pistol altogether. As a single-stroke pneumatic, it’s easier to cock (pressurize) than a P1, has no recoil and has a much lighter factory trigger. Though the velocity is stated as 410 f.p.s., my own pistol shoots around 440 with lightweight wadcutters. It’s no hunting gun, to be sure, but what a wonderful plinker or target pistol!

Accuracy
When I was a kid, pellet pistols were one of two different things. Either they were Benjamin pneumatics that would shoot 2″ groups at 30 feet, or they were CO2 pistols that wouldn’t group that tight. Velocities were in the 350 f.p.s. range, and of course the pellets we had were trash compared to what’s available today. If there had been a pistol like the HW75M back then, it would have been regarded as world class. I can shoot a perfect 50 for five shots on a 10-meter target with this pistol. The adjustable sights sit a little higher in the hand, and you have to use an M1911A1 grip for best results, so it’s not as easy to shoot as a 10-meter pistol; but, like the P1, the 75 is another perfect training tool for 1911 shooters.

Operation
To load and cock the gun, press in on a flat button on the left side of the frame next to the hammer. The top of the frame containing the barrel is unlocked and swings up and forward – pivoting at the muzzle. Compared to the P1, much less of the gun swings forward and there is very little resistance. When the barrel is fully extended forward, load a pellet directly into the exposed breech and close the gun. It takes a lot less effort to close this pistol than the Marksman 2004 that is now called the Beeman P17. The gun is now ready to shoot. The safety is not automatic, so it remains off throughout this operation.

P2/HW75 with barrel fully forward for the pump stroke.

Do not leave any single-stroke pneumatic pumped for very long. The flexible piston head is also the front reservoir seal, and, being flexible, it does not want to remain under pressure for a long time. Perhaps five minutes should be considered the maximum.

Trigger
The two-stage trigger is butter-smooth, and mine is set to release at 20 oz., but you can easily adjust it down to 10 oz. or less and make it a single-stage, if you like. The pull weight is also adjustable. You can dry-fire the pistol by cocking the hammer without pressurizing the pistol.

Sights
The rear sight is fully adjustable and features a sharp notch. The front sight is a low, square blade that’s nicely sized for the rear notch. The top strap that’s used to charge the pistol has an 11mm dovetail cut for mounting pistol scopes or dot sights, so the choices for sights is broad.

The grip
Weihrauch made two different grips for the HW75. One was a standard set of M1911A1 scales that interchanges with those on the P1 or a 1911. The other was a more sculptural grip with slight ambidextrous thumbrest scallops on either side of the gun – the grip you see on the 75M. This grip is heavily checkered and very attractive, in my opinion. Unfortunately, mounting this grip requires machining of the grip frame, so it doesn’t fit a P1, or P2 that currently has 1911 scales. This grip is the one thing I wish my P2 had, but it was always a costly option, so the standard grip probably outsold it by a wide margin.

I have said this before, but it bears repeating. The HW75M is an heirloom air pistol – the kind you hand down to your heirs with pride. As the years and decades pass, quality of this level will become rarer and rarer, and makers of new airguns will not think of trying to repeat it. 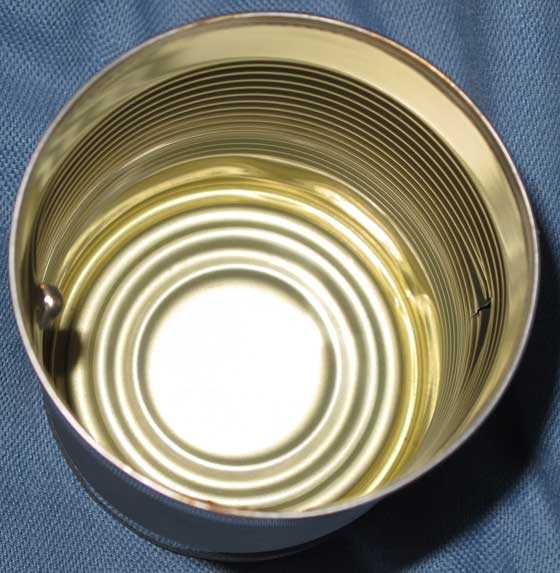