Today, I tested the Air Venturi Pro-Guide spring retainer in the .22 caliber RWS Diana 48 using a washer spacer to increase velocity. However, as sometimes happens, fate stepped in and changed the test. I had been testing with .22-caliber Crosman Premiers, and you may remember that I mentioned the gun was still more variable than I would like. Well, that turned out to be the pellet fitting too loosely in the breech, so I was unable to continue the test with Premiers.

That being the case, I installed the factory mainspring and spring guide and tested it with a pellet that fits the bore tight enough for credibility. It turned out to be the Gamo Hunter, a 15.3-grain domed pellet.

The washer
As long as I was inside the gun, I decided to add the washer to the factory spring, as well, so we would have a good comparison between both systems. It turns out that we need a 5/16″ plain steel washer for the Diana piston rod. The hole in the washer has to be enlarged a few thousandths, which a Dremel tool can do in about five minutes. One washer is 0.079″ thick; since I was advised that there might only be 0.10″ remaining clearance in the mainspring, I went with just one. I smeared it with lithium grease on both sides and dropped it over the piston rod, then installed the mainspring and guide in the normal fashion. 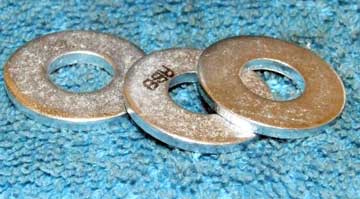 Plain 5/16″ steel washers worked fine for spring spacers, once the hole was slightly enlarged.
Factory spring test
I had forgotten about the vibration of the factory mainspring. It isn’t bad, but you do notice it after having used the Pro-Guide system. The velocity range for the 15.3-grain Hunter was 774 to 801 f.p.s., with an average of 791 f.p.s. That works out to 21.26 foot-pounds of muzzle energy, which is right where an RWS Diana 48 belongs.


I removed the factory spring and guide and replaced them with the Pro-Guide system. The washer was still in place, so testing began immediately.

Pro-Guide test
The vibration was gone again with the Pro-Guide. I have to say that it’s a nice feeling in a gun this powerful. The cocking effort does feel a pound or two heavier, but not that bad, because the sidelever linkage offers so much advantage.

With the Pro-Guide, the velocity ranged from 792 to 800 f.p.s., with an average of 796. That computes to 21.53 foot-pounds of muzzle energy. Not much more than factory; just like we saw in the original test with Premiers and no washer.

I’ve had this rifle apart so many times that it’s getting to be as easy as stripping a Weihrauch. The T05 trigger deserves the credit for that, but don’t forget to pull the trigger before you assemble the rifle and make sure that the safety doesn’t slip into lockup as the trigger unit goes in. That happened to me and required another strip-down to correct.

The next step is to install the Pro-Guide in the .177 RWS Diana 34 Panther to see what it does.