Before we begin, here are the answers to the splat quiz about velocities shown in Wednesday’s Splatology blog:

Two tests in one
Today, I’ll prepare to test the accuracy of the Hammerli Razor and also start another big test. Since I’m mounting a scope for the accuracy test, I decided to let the Razor be the first testbed of the BKL 260 one-inch scope mount that holds onto an 11mm dovetail by clamping pressure, alone. Describing the mount and scope installation will take up today’s report. 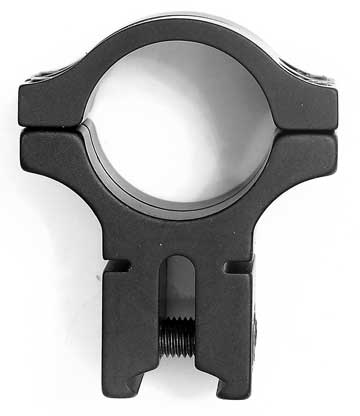 BKL cross-section shows how the clamping jaws will move under pressure.

As many of you know, BKL scope mounts are pretty popular among airgunners. The company went out of business some time back, but even before that happened the shipment of mounts became sporadic. BKLs are about the only airgun scope mount actively bought and sold with any regularity on the classified sites.

Auto-Numatic, the parent company of AirForce Airguns, bought the company and has been quietly producing many different models of the BKL mount line to meet the expected demand when the dealers who used to stock BKL products place their orders. The wait is about over now, as the inventory has been built up to satisfactory levels, more or less. All products may not be ready to ship, but the most popular ones are.

Installing the BKL 260 MB
The BKL 260 MB is a one-piece, medium-height scope mount with two rings, each having two screws. The mount base that clamps to the rifle’s 11mm dovetail has six screws. But that isn’t the only thing that clamps it to the dovetail. The clamping jaws are closer together than the Razor’s dovetail grooves, so before it can be installed, those base jaws must be spread. This is where BKL’s special technology comes into play. Besides the six screw holes, there are thee holes where three of the six screws can be inserted to put spreading pressure on the base jaws.

BKL 260 has six clamping screws, shown here. The three holes accept a clamping screw that can spread the clamp jaws to go on a rifle with a larger-width dovetail.

The Razor must be prepped to receive the BKL mount by removing every last bit of oil found in the 11mm dovetails. I use a cotton swab and denatured alcohol. I rub the swab into each dovetail cut with force so that the alcohol gets into the deep recesses and dries up all the oil. The alcohol evaporates rapidly and leaves nothing behind. Soon, the rifle is ready to receive the mount.

Three screws are positioned to spread the clamp jaws. When I turn them inward, it forces the jaws apart.

To spread the base, I tighten each of the three screws in turn, so not too much pressure gets applied in one place. It’s possible to see the base clamp jaws spreading, plus the anodizing in the center of the base develops a line as the metal flexes. 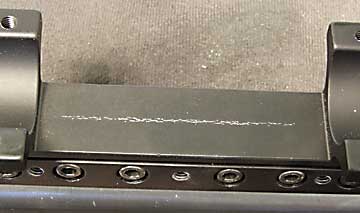 When the jaws were spread, the anodizing came off the center of the mount base. That metal definitely moves!

Working slowly to not over-flex the base, I finally reach the point where both clamp jaws fit into the Razor’s dovetails at the same time. Now, the three spreading screws are backed out of their holes. When that’s done, the base holds tight to the rifle by clamping pressure, alone. But, of course, I’m not finished.

The six clamp screws are inserted into their holes and tightened. I work successively down the line, tightening each screw as I go. After five or six trips down the line of screws I have the mount clamped to the Razor as tight as I believe it’s possible to go. Next, I installed some movement markers, in the form of Gorilla tape. For those who haven’t yet tried this stuff, it’s far stickier than regular duct tape. We use it on the TV show, and I’ve seen it do things I didn’t think tape could do. These small strips of tape are not going anywhere until I purposely remove them.

I place them in front of and behind the mount. Any movement will cause the tape to rise as the mount presses against it, or we will be able to see the mount move away from the tape. Either way, we should all be able to see it clearly and have no cause for argument. 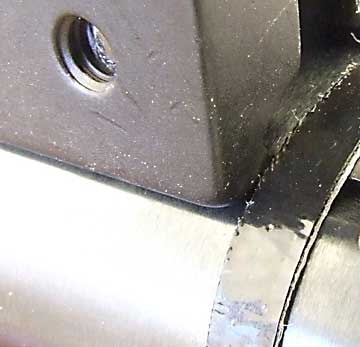 Tape at the left rear of base. 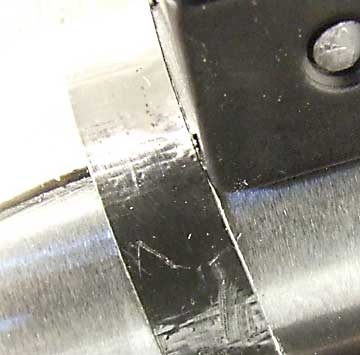 Tape at the left front of base. 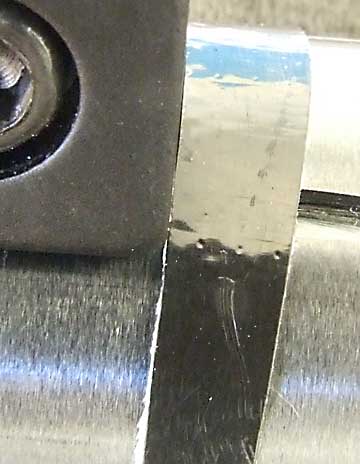 Tape at the right front of base. 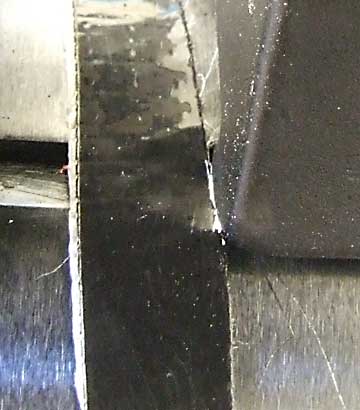 Tape at the right rear of base. If the mount moves, it will either curl the tape or move away from it. Either way it will be visible.

It’s time to select and mount a scope. These are one-inch rings, so I need a scope with a one-inch tube. I selected a Bushnell Trophy 6-18×40 scope, and, YES, the scope does clear the breach, and, YES, the 40mm scope objective bell has clearance over the spring tube with this medium-height mount. A 50mm bell would not clear.

Bushnell scope is large but not too long for this rifle. The barrel is still an inch in front of the objective bell. 40mm objective bell just clears the spring tube.

When it was time to remove the scope caps, another BKL innovation came to light. The cap screws are the SAME SIZE as the base clamp screws. Hallelujah! Finally a scope mount maker gets it. Why put three different-sized hex screws in a mount when one will do? This is a great engineering call that shows someone gave some thought to the customer in the field. You need only one Allen wrench to do everything.

Now that everything is cinched down tight, I’ll test for accuracy. After that test, the gun will have at least 100 shots on it, so we will take a look at the tape. If it hasn’t moved, I’ll continue to shoot the rifle another 400 shots and then remove the scope and photograph the tape for you. 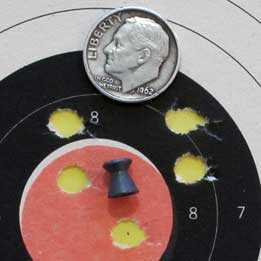