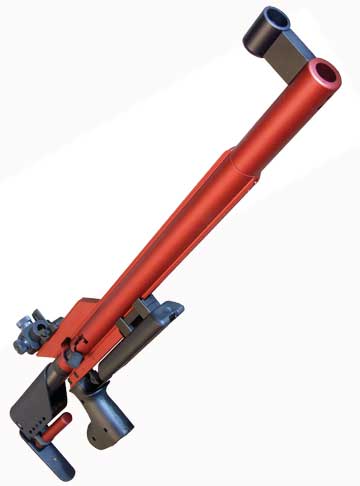 This is accuracy day for the AirForce Edge, plus a closer look at a couple features. I aired up the rifle and, from the results of the testing done in Part 3, I knew I would finish shooting with a lot of shots left on the reservoir.

You’ll recall from Part 3 that the Edge shoots light match pistol pellets in the 520s and heavier match rifle pellets in the 480s, so this test should prove interesting. We’ll learn if speed plays any part in accuracy. All these groups are five shots at 10 meters with a rested gun.

Note that I’m not entirely centered on the target with any of the pellets. I didn’t bother to make the final adjustments because I was going to be shooting four different pellets, each of which would have required a lot of final fiddling.

Meisterkugeln lites
The Meisterkugeln lite was my sight-in pellet. Three shots to get into the bull and another seven to refine it. And then the group. And a good one at that! This is a pellet to remember for the Edge. I think I will put some through the chrono, because this pellet, at 7 grains, is even lighter than the H&N Finale Match Pistol pellet I tested in Part 3. 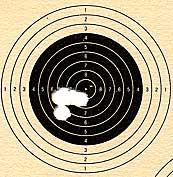 Five Meisterkugeln lites made a pretty good group at 10 meters. 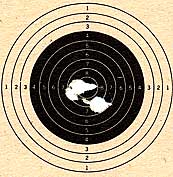 Another Meisterkugeln lite group is only slightly larger.

H&N Finale Match Pistol
The H&N Finale Match pistol pellet was the lightest pellet tested in the velocity test in Part 3. It weighs 7.6 grains (says 7.56 grains on the PA website, but I round off to the nearest tenth), which makes it fast in the Edge. And I got the best group of the session with it. 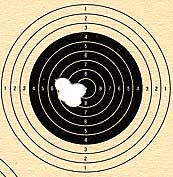 The best group of the session came from H&N Finale Match Pistol pellets.

I came back to Finale Match Pistol pellets after testing the heavier pellets. They continued to be the pellet of choice from the four tested, but if I were competing, I would not stop looking.

RWS R10 Rifle
RWS R10 Heavy Match pellets weigh 8.2 grains and averaged 487 f.p.s. in the velocity test. They’re heavy for the Edge, so this was an interesting experiment. They loaded with more resistance, too. 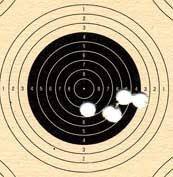 RWS R10 Match pellets didn’t do so well in the Edge. This group surprised me until I saw something similar from the H&N Finale Match Rifle pellets that weigh an identical 8.2 grains 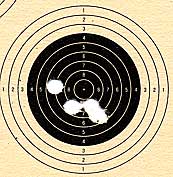 H&N Finale Match Rifle pellets performed almost identically to the heavy R10s. I think this pretty well proves that the Edge likes the lighter pellets best. Of course, one test is not enough for any conclusions.

The adjustable trigger
I mentioned before that the Edge trigger is adjustable; I’ll go into the details now. The primary adjustment is a single screw located just in front of the trigger blade. Screw it in for a heavier second stage, out for lighter. I was able to adjust it down below the 1.5-lb. sporter-class minimum, so there’s plenty of room to experiment.

The other trigger adjustment is more subtle. It involves positioning the trigger blade up or down on its post. Down gives more leverage, which results in a lighter pull. Between the two adjustments, you should be able to get the Edge trigger adjusted very nicely. 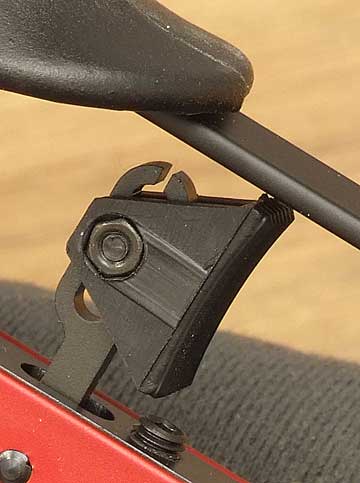 The Allen screw in front of the trigger is the primary adjustment. Out for lighter. The trigger blade also slides up and down on the stalk, changing the geometry–another adjustment.

When shooting, the Edge trigger feels as though it has a positive trigger stop, even though there isn’t one on the gun. The trigger breaks so cleanly that my finger naturally stops after the break, and it feels exactly like a trigger stop. So, the Edge trigger is quite sophisticated. Sporter-class shooters are going to love it.

More on the action: how the bolt works
The key to the Edge trigger is the cocking raceway, or what I called the bolt track in Part 1. 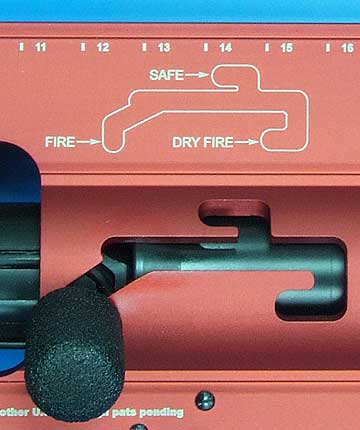 The graphic on the gun shows how the bolt operates the action.

The bolt can be swapped from one side of the gun to the other, making the rifle completely ambidextrous. However, AirForce cautions that this is not something you want to do often, because the Locktite on the screw threads of the cocking handle will wear off. Clubs shouldn’t think they can switch between kids during a season, because too-frequent changing will require frequent renewing of the Locktite. The mating parts are steel to steel, so wear isn’t a problem, but if the Locktite gets worn off they will loosen with use. Set up a rifle for the lefties and leave it that way.

Velocity test
Now, for the report on the lightweight Meisterkugelns, as promised. What do you think they’ll do?

Today’s work tells me to continue the search for the best pellet for the Edge and to shoot H&N Finale Match Pistol pellets while I do. The trigger is sweet, the sights are crisp and easily adjustable, it’s the only sporter-class target rifle with a dry-fire feature and the adjustable weights are extremely flexible.

And there’s a surprise coming soon, I hope.