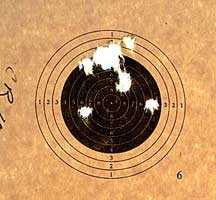 by B.B. Pelletier
Testing and photos by Earl McDonald

Today, we’ll look at the accuracy of our test Beeman R9. Remember, Mac is testing this at his house on Maryland’s Eastern Shore. He’s shooting from inside his garage out into the wood line at the side of his house. By doing it this way, he can chronograph the shot as well as shoot at the target at the same time.

This past Sunday, he was testing another rifle for us and stepped on an underground hornet’s nest. I don’t know if they were actual hornets, but they sure acted like it. The aggressive black and white wasps stung him a dozen times before he could get away.

Mac also wanted me to tell you that this new restyled R9 has a slimmer forearm. Instead of the bull-nosed R1 forearm, the new R9 forearm tapers up after the stock screws. You can see this in the detailed photos on this website. He says he likes the new style better than the old. It makes the rifle more svelte.

Accuracy testing was at 30 yards, with the forearm resting on his open palm at the balance point of the rifle. The scope was set at its maximum magnification of 12x. All groups were 10 shots.

Premier 10.5
Crosman Premier 10.5-grain pellets grouped okay but had a few fliers. That may have been due to irregular pellets, because Mac didn’t sort pellets for this test.

The heavy Premier looked as though it wanted to shoot, but there were some fliers. Perhaps sorting would eliminate these.

Premier 7.9
With the 7.9-grain Crosman Premier pellet, the groups were tight and there were no fliers. The rifle was still burning oil that could be smelled, but there were no detonations during accuracy testing. 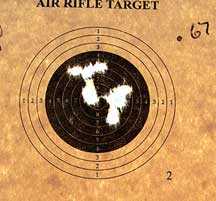 RWS Hobby
And the lightweight RWS Hobby pellets went all over the place. Not a good pellet for this R9! 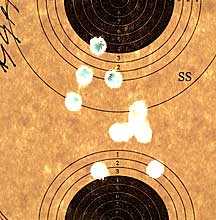 The light Hobby was not accurate in the test rifle.

Beeman Kodiaks
The most accurate pellet in the test was the heavy Beeman Kodiak, by a slim margin over the Premier lites. This pellet also gave good performance in the velocity test, so it should always be considered for this rifle. Remember, H&N Baracudas are the same pellet by another name. 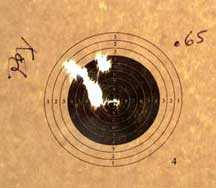 The heavyweight Kodiak pellet was the most accurate in this test, grouping as tight as 0.65″.