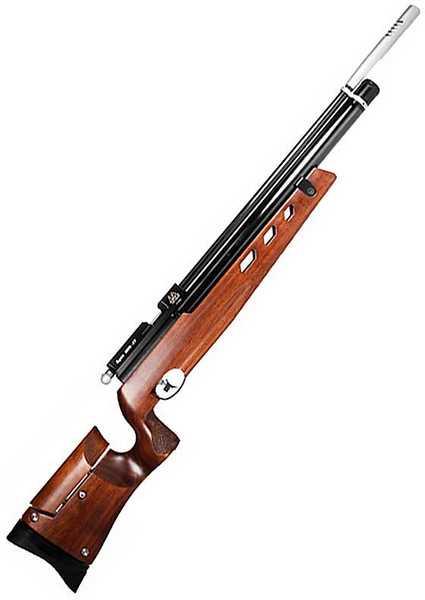 Today, we’ll test the accuracy of the Air Arms S400 MPR FT precharged pneumatic air rifle, and it’s a challenging test because I shot this 12 foot-pound rifle at 50 yards on a day with 20 mph winds. The wind was from my 6 o’clock, and the trees created some swirls. I had to wait out the gusts and shoot in relatively calm periods.

However, before I begin today’s report I’ll rant a little. I was testing several things last week and someone asked me to test his Talon SS. He claimed he could not shoot groups smaller than 2 inches at 30 yards and most of his groups at that range were four inches. Well, I’ve never seen a Talon SS that shot that bad; even the one with the only Lothar Walther barrel I ever condemned in my three years at AirForce.

When I asked for pellets to shoot in his gun he handed me Crosman Premier hollowpoints in a tin can. The first pellet fell through the barrel and the second one wouldn’t enter the breech, so I asked for some other pellets. He gave me some Daisy pointed pellets.

There’s your problem!
Folks, just as an airplane cannot fly on 87 octane gasoline, a precision air rifle cannot be accurate with discount store pellets. Yes, I know how “cheap” they are; but really, guys, when the rubber meets the road, you need better ammo than this.

I don’t want to start a long argument about bang for the buck, or anything like that, so I thought I’d show you just how important the right bullet/pellet is. Last week, I also happened to get out to the range with my Ballard target rifle. This time, I was testing a new load, and it just so happened that there was a new bullet in this load, as well.

The first target I ever shot with the Ballard was shot with lead bullets just as they dropped from the bullet mold. They were sized 0.381 inches nominally and lubricated by my finger pressing grease into the grooves. The new bullets I was trying were the exact same bullet, but sized to 0.379″ and with the grease grooves filled by a machine. Let me show you what happened. 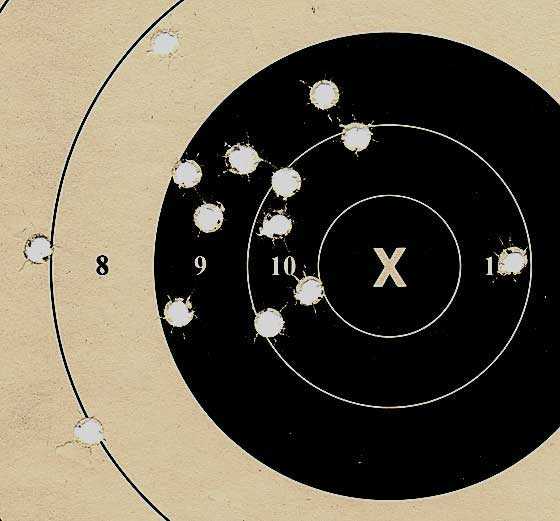 This is the first 100-yard group I shot with the Ballard rifle. I was just burning up the old 16-grain loads with the as-cast, finger-lubed bullets. I made two sight adjustments while this group was being shot! As casual as this group is, it’s clearly better than the second group made with the new ammo. 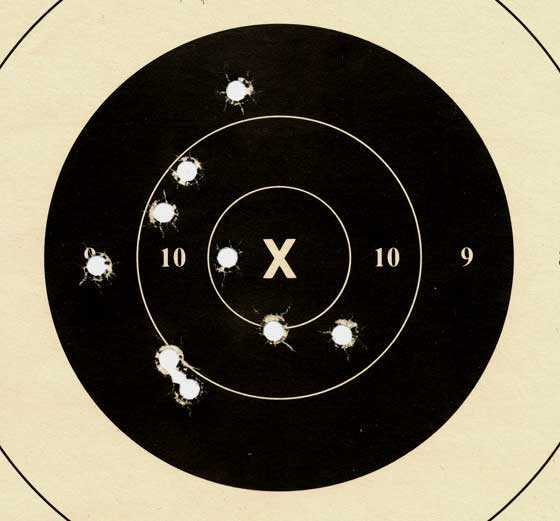 This was supposed to be the perfect 10-shot group. Here, I used the new bullets sized 0.379 inches and 18 grains of powder. The reason the bullet holes are smaller is because the bullets were moving faster — I guess! This is not a good group.

Obviously, I moved away from a good load and toward a bad one. The unsized bullets are better in this rifle than the sized bullets. The powder change may not have helped as I thought it would.

Back to pellet guns
This is what I mean when I say that your ammunition matters. Want to know what I shot with that “inaccurate” pellet gun? At 30 yards, I shot groups measuring .75 inches in a stiff wind. One four-shot group inside the five was .25 inches. I was using Crosman Premiers in the cardboard box. It made all the difference in the world. The message? Stop using discount-store pellets in precision airguns!

Today’s report
Back to the Air Arms S400 MPR FT. I’m also testing a Hawke 4.5-14×42 Sidewinder Tactical scope with illuminated reticle, on which I’ll give a separate report, and it was mounted on the S400 MPR. I tried light and heavy pellets. Because of the wind, the light pellets didn’t fare as well as the heavies. Just like picking the right pellet for the gun, picking the right pellet for wind conditions is very important for accuracy, as you’ll see.

Air Arms Falcon pellets
The first pellet I tried was the Air Arms Falcon. At 7.33 grains, this domed pellet is extremely light, and while it is often one of the most accurate pellets in a given rifle, the day was too breezy for it to hold up at distance. Remember, I’m shooting 10 shots at 50 yards, which is not easy with any pellet rifle! 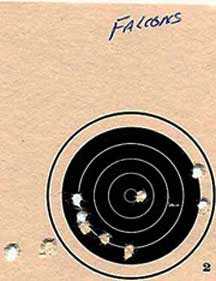 The spread of these 10 Air Arms Falcon pellets is 2.191 inches at 50 yards. Clearly, the wind is too much for this pellet at long range.

JSB Match Diabolo Exact pellets
The next pellet I tried was the JSB Exact 8.4-grain domed pellet. It proved to handle the wind quite a lot better, posting three 10-shot groups of 1.221 inches, 1.374 inches and 1.699 inches. 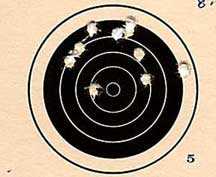 Crosman Premier pellets
Next, it was time to try the 7.9-grain Crosman Premier domed pellet in the cardboard box. Remember my rant in the beginning of this report? Premiers that are not in the cardboard box are made on the same dies as those in the box, but they’re not sorted by die. Which means they will have a larger variation than the boxed pellets. Look at the results that two thousandths of an inch made in the Ballard rifle and understand that it does make a big difference what you load into your air rifle. Maybe for plinking at 25 yards you can get away with discount store pellets. For the ultimate in potential, you have to use the best pellets you can buy.

With the 7.9-grain Premiers, I shot two groups. They were 1.697 inches and 1.736 inches, which is pretty close. Not as good as the JSBs and not the pellet to choose for this rifle on a windy day. 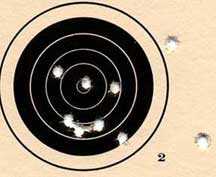 You can see the lateral dispersion from the wind. Ten Crosman Premier 7.9-grain pellets at 50 yards. This was the better of two groups of lite Premiers.

The last straw — Beeman Kodiaks
Had I realized the wind would be such an issue, I would have brought more heavy pellets to test. I almost didn’t bring the tin of Beeman Kodiaks, but I threw them into the range bag because this is a PCP rifle that performs best with heavier pellets. Even at only 12 foot-pounds, the Kodiaks should have done fairly well. 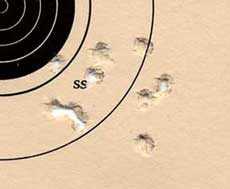 Beeman Kodiak pellets shot the best group of the test. Ten pellets went into this group that measures 1.183 inches.

The bottom line
You’re used to seeing .75-inch groups at 50 yards, so these results may not impress you. Bear in mind that this is a 12 foot-pound rifle. So, the pellet stays out in the wind much longer than if it were going faster. A 20 mph wind is not a day for setting records at 50 yards with any air rifle. That much wind is hard on even a .22 long rifle bullet at 50 yards! So, these groups are actually pretty good for the conditions.

I’ll be reporting on the Hawke scope. But, I’ll tell you right now it’s a wonderful optical sight. A lot of what I was able to do on this challenging day was because I could easily bisect the center of the small bullseye at 50 yards. 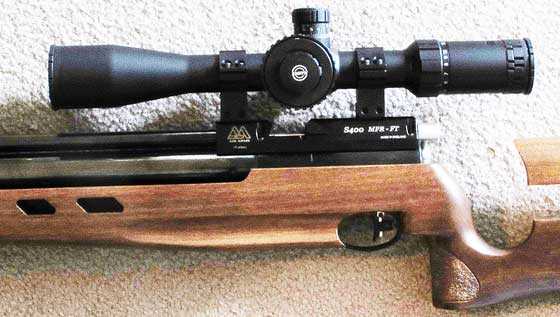 There will be a complete report on the Hawke 4.5-14x42AO Sidewinder Tactical scope in the future, but from this test I can tell you it’s a winner!

I’ll also do another report on adjusting the power higher. Stay tuned for that. 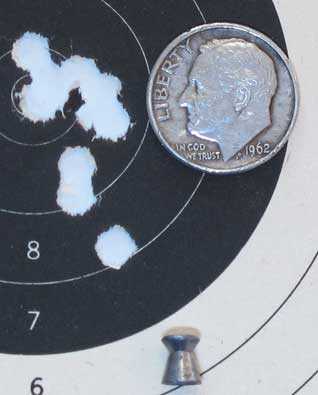