This is part 2 of Vince’s disassembly and repair of the Falke model 90 underlever spring-piston rifle I sent him several weeks ago.

Yesterday, we saw the first of many problems. Now, it’s time to dive into the gun. The first step is to remove that troublesome tap and the stuck pellet. 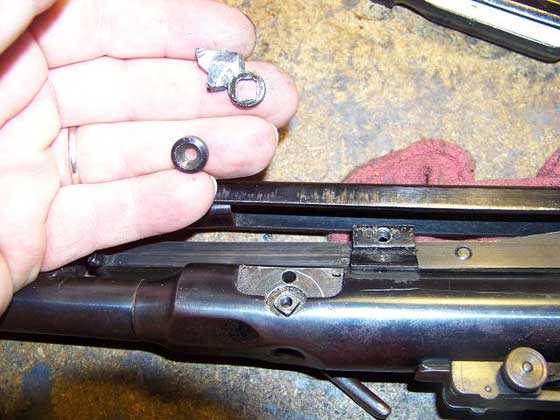 Here are the tap screw, washer and opening lever. 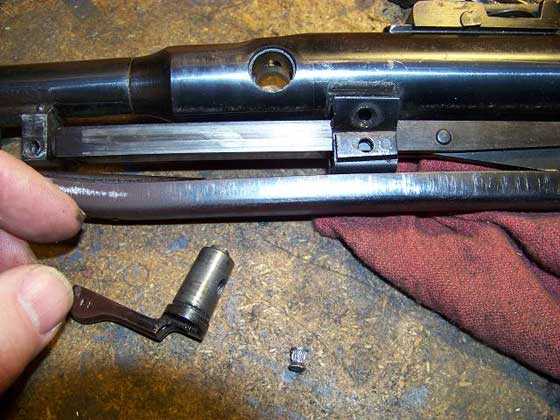 I can pull out the tap AND the completely undamaged pellet. Curiouser and curiouser — I thought the pellet would be a little chewed up from the failure-to-feed episodes that we seemed to experience. But, no, it looked perfect.

The rest of the gun slid apart easily. This is a very Hakim-like cocking linkage and trigger.

After removing the front linkage guide, the main retaining screw, and the rear trigger retaining pin, the cocking action and trigger assembly just slide forward and off. The rear spring retainer just screws out:

The end cap shouldn’t be hard to remove, and I don’t expect the spring to be under much compression.

At this point, I have no idea how much preload I’m looking at. As I get it within a few turns of removal, I can feel a little free-play in the threads. This means that I can push against the spring and get a fair idea of what kind of pressure I’m going to have to deal with. It’s not much. Still, as a precaution I toss an old t-shirt over the end cap before I completely unscrew it. 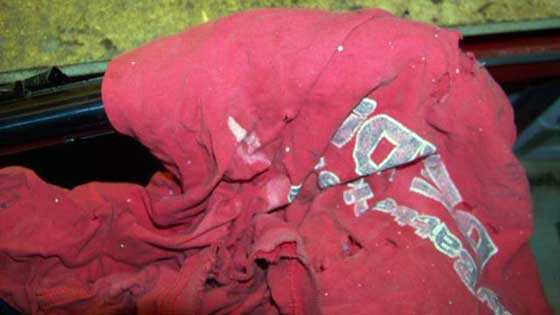 Ready to remove the spring.

Note: Vince is highly experienced and knows when a spring is beyond his ability to remove it without a compressor. Most springs should not be removed without a mainspring compressor. However, this rifle is under so little pre-compression that there’s no danger at all.

Even if it tries to go sproing, the rag will quickly arrest whatever tries to come shooting out. Which it doesn’t. I was correct. There’s very little preload in the powerplant.

As expected, removing the end cap was a piece of cake.

Next, I attempted to slide out the piston. I say attempt because every time I started to pull out the piston it popped right back in as soon as I let it go. That’s weird — it feels like I’m pulling a vacuum. That can’t be. Heck, the loading tap isn’t even installed, which means the transfer port is open to the atmosphere. Regardless, after a few tries of this sort, I kind of forced the issue and finally extracted the reluctant part.

Man, that’s one ugly piston. Not sure what’s on it — semi-sticky, dirty, icky — it really needs a good clean-up, which it gets from a wire wheel. And, is that seal ever beat. Hey, what’s that? Looks like a big metal flake stuck on the end of the piston!

What’s stuck to the end of the piston?

I peeled off the metal flake and hit it with a small torch. It melted immediately. Just as I thought…lead. Now, things are making sense. Why was the piston so reluctant to come out? Let’s take a look into the now-empty compression tube, shall we? 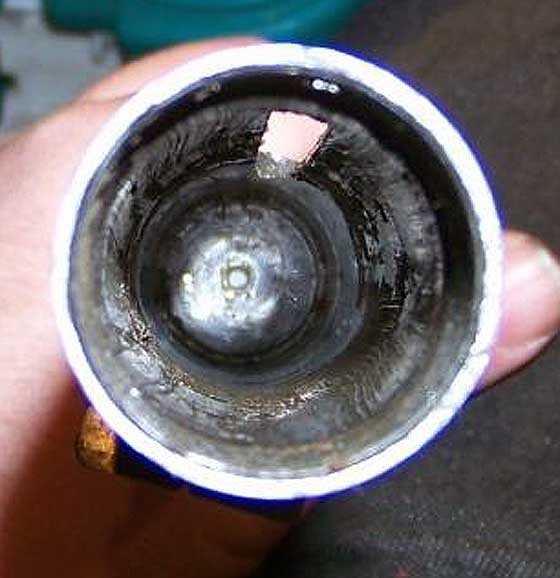 That little circle at the bottom of the tube is supposed to be a hole. A whole hole, not half a hole. Something’s in there that’s not supposed to be in there. So I went in from the muzzle with a long steel cleaning rod. I banged on it a bunch of times.

The cleaning rod should pop out whatever’s stuck. 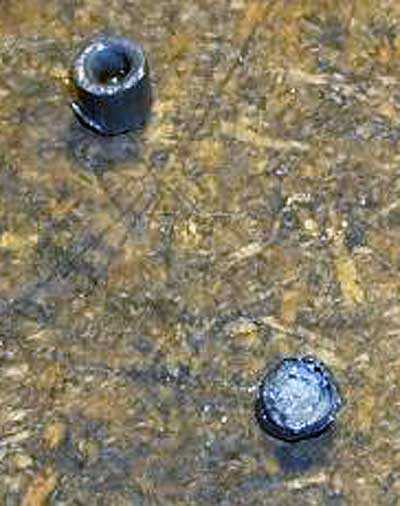 Apparently someone tried loading .177 pellets into this thing. An easy enough mistake, I guess. But when he (I’m assuming it was a guy!) closed the loading tap, the pellet would slide backwards into the transfer port and into the compression chamber. Looks like this was attempted more than once, and eventually the piston just mashed the errant pellet(s) into the transfer port, plugging it pretty effectively. Which is why, when I tried firing it, I just got pffffft. The pellet in the tap wasn’t getting jammed. The fact is that no air at all was even reaching it. 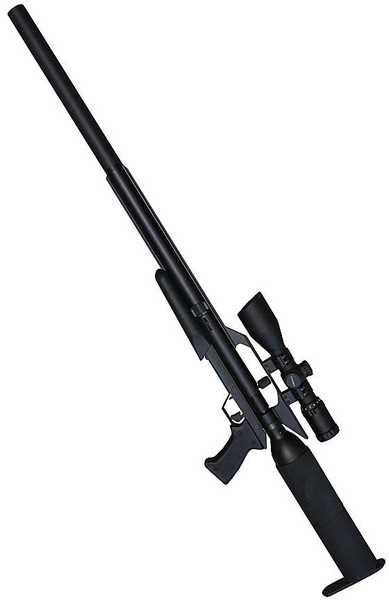