Today, I’ll start looking at the Smith & Wesson M&P 45 air pistol from Umarex. This is a CO2 pistol with a rifled barrel that shoots both BBs and pellets, so I know there will be a lot of readers who’ll like it. This type of air pistol is becoming more popular all the time, and nowadays a maker can use synthetics in their guns because the firearms they copy also have them.

The gun’s price is low; and according to the one review posted on the website, it’s also accurate. No, make that highly accurate, because the reviewer said he shot out a one-inch bullseye at a range of 22 to 24 yards. I find that difficult to imagine, because I would have a hard time shooting that well with a .22 target pistol, but you know I’m going to put this pistol through its paces. If it really is that accurate, this will be a best buy!

Secrets revealed!
The pistol is all synthetic on the outside. The slide is split in the middle and the front half goes forward to load the pellet or BB clip when the slide release located on the left side of the frame is activated. But a little secret that the owner’s manual doesn’t tell you about is that the rear half of the slide also moves. Pull is backward when you want to fire the gun single-action. The rest of the time, you can just pull the trigger and shoot double-action.

Read the manual
The two clips are not interchangable. The pellet clip is gray metal and the BB clip is black plastic. They are properly called clips and not magazines, because they simply hold the rounds and don’t have springs to move the ammunition in the gun.

Each clip is loaded differently; and even if you don’t read the rest of the owner’s manual, at least take the time to read how to properly load each clip. It’ll save you down time with the gun. 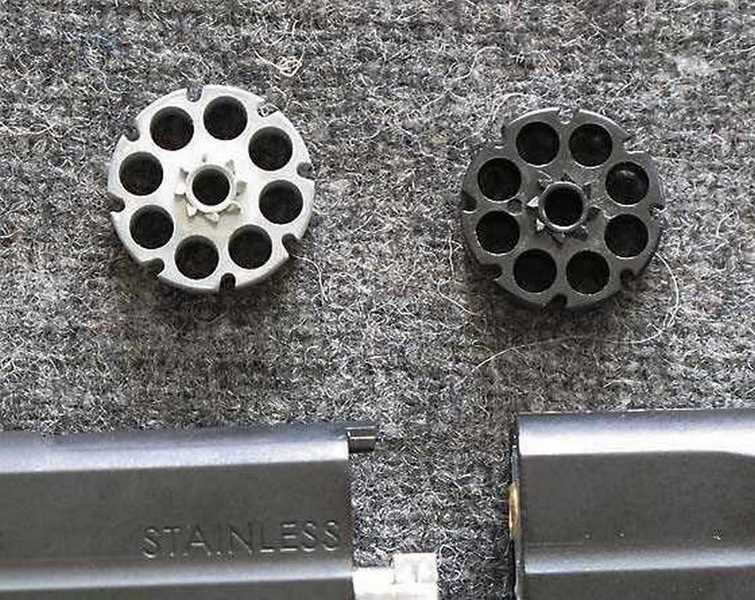 Each clip is for a different type of ammunition. Read the owner’s manual!

Sights are nice
The sights are tactical with three dots — one on the front post and two in the rear — one on either side of the rear notch. They’re bright yellow, and I find them quick to acquire.

The front post is also square in the rear notch, so it can be used with some precision if the lighting is right. That would be with the gun in the dark and the target brightly lit. There isn’t much room on either side of the front post, so you’ll have to work to keep a sliver of light on both sides.

The rear sight adjusts sideways for windage. A locking screw holds it in place.

The CO2 cartridge goes into the grip, of course, but the way it does is novel. You pull down on the front of what would be the magazine floorplate and the “plate” swings down, but the grip strap also swings up and away from the gun. The grip accepts the new CO2 cartridge, and the floorplate hides the CO2 tension screw. 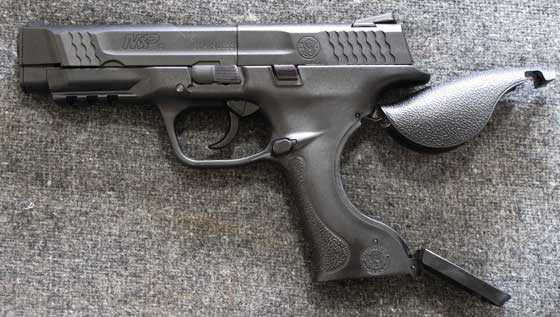 The way the CO2 cartridge installs is a bit different!

The safety is a bar on the right side of the frame that gets pushed forward and up for fire and forward and down for safe. Pushing forward unlocks the bar so it’s free to move. On other pistols I’ve tested, this bar was hard to move; but on this one, it works as it should. On the firearm M&P, the safety is a thumb lever on both sides of the frame for ambidextrous operation.

This is a large pistol but not a heavy one. It weighs less than a pound and a half (24 ozs.), while the firearm it copies weighs almost six ounces more when empty.

A Picatinny rail is cast into the underside of the frame, so you can mount tactical flashlights and lasers. No doubt a great many owners will want to mount at least one of those on this pistol because of the tactical connection. Just make sure your holster can hold the accessorized pistol, as the extra light will add a lot of bulk in the front.

This looks like a good pistol. The trigger is light in the double-action mode and also in single-action. Of course, it’ll take an accuracy test to tell the whole tale. We’ll get to that after we look at velocity for both kinds of ammunition.