Some of you are sitting at home right now, bored out of your gourds! Have you forgotten that you are airgunners? This is your time to shine!

This is a refresh of an article I wrote for the website in 2006 — 14 years ago. Things have changed a lot since then, so I have updated it.

With the right airguns, it’s not only possible to shoot at home, you’ll wish you’d started years ago. I’m not talking about your backyard today. Some folks have large private backyards that let them shoot without disturbing their neighbors. But many people like me are squeezed into closer quarters with neighbors who may call the police if they see someone outside with a gun. However, a home is still a castle, and yours can have a shooting range inside. read more

A couple weeks ago, several readers had a discussion on the blog about shooting the Colt Single Action Army BB revolver with pellets. I didn’t read everything they said in detail, but the basic idea stayed with me for several days until I began to wonder, “Why not?” Back in 2013, I tested the

This is the report you’ve been waiting for. How accurate is the Black Ops Junior Sniper air rifle combo with steel BBs? Today, we’ll find out.

I went back to Part 2 and discovered that the rifle gets almost 500 f.p.s. on 3 pumps when shooting BBs. Since I was shooting at 16 and a fraction feet (5 meters), this was more than enough velocity for the test. It also sped up the test a bit.

Monopod
I try to take my personal weaknesses out of any test I do, and resting the gun is a good way to do that. I used to use a bench and sandbag for all of this, but shooting a BB gun at 5 meters is a lot to set up for. Thankfully, I discovered the UTG Monopod. It’s light, quick and convenient. And, it produces results that are very close to a bagged rest. Certainly, they’re good enough for a test like this.

Daisy Premium Grade BBs
The first BB tested was the Daisy Premium Grade BB. I loaded just 10 into the gun’s reservoir, then started shooting. At first, I thought the gun was doing very well; but as the shots increased, I could see that it wasn’t. In the end, I’d put 10 shots into 1.787 inches. That’s at just over 16 feet! Most BB pistols will do better than that. 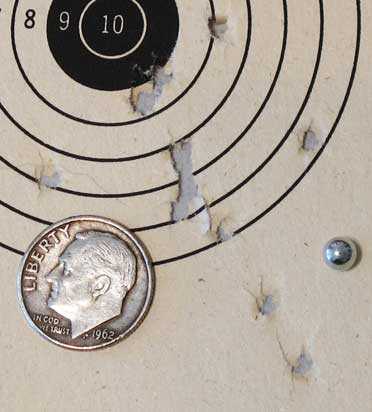 As things turned out, this was the second-worst group of the test. Daisy BBs aren’t on the bottom very often, but this proves that it can happen.

Hornady Black Diamond BBs
The next BB to be tested was the Hornady Black Diamond. In other tests, I’ve found these BBs to be equal to the best, though not all guns seem to like them. But the Black Ops Junior Sniper seems to. Ten of these black steel BBs went into a group that measured 0.991 inches between centers — or just about an inch. While that certainly isn’t target gun accuracy, it sure is going in the right direction! It turned out to be the best group of the test! 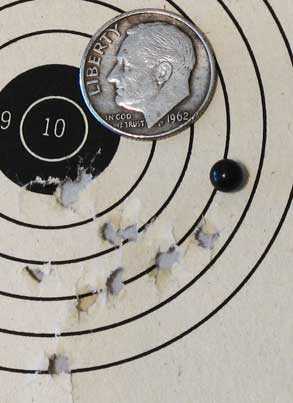 Crosman Copperhead BBs
Next, I tried Crosman Copperhead BBs. While these are premium BBs, they’re slightly smaller than the others and vary in size just a little more than the rest. But this time they were just about even with the Daisy BBs, putting 10 into 1.79 inches at 5 meters. This was the largest group of the session, but it’s so close to the Daisy group that I have to rank them as equal. 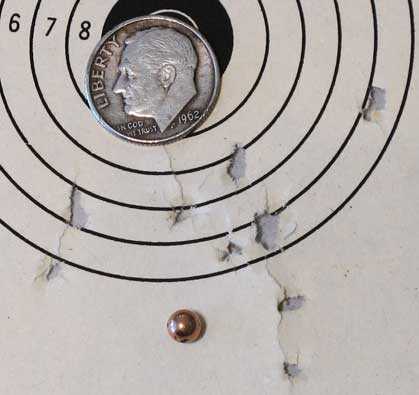 Crosman Copperhead BBs did about the same as Daisy BBs in this test. Ten went into 1.79 inches at 5 meters.

Avanti Precision Ground Shot
The last BB I tried was the Avanti Precision Ground Shot. Since these are so demonstrably better than other premium BBs in the Avanti Champion 499 BB gun, we tend to think of them as more accurate in all guns, but that isn’t the case. They’re slightly larger, and their surface is very uniform, but not all BB guns can make good use of those qualities.

In the Black Ops Junior Sniper, 10 Avanti shots printed a group that measured 1.625 inches. That’s not much better than the 2 worst groups, and way off the pace of the Black Diamond BBs. 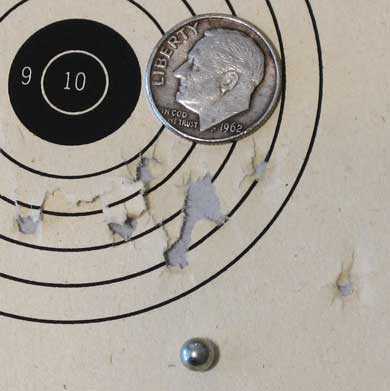 Let’s look at the accuracy of the

Today, we’ll look at the velocity of the Black Ops Junior Sniper air rifle combo. I told you last time that the loading trough is narrow and difficult to access, and I tried to photograph it for you but was unable to get a picture that showed what I’m talking about. Just take my word that this rifle has much less access room than a Daisy 880 or a Crosman 2100.

I shot the rifle with pellets, BBs and lead balls, because I know some readers are interested in every type of ammo. In doing so, I learned some valuable lessons about this airgun! Let’s get started.

Theoretically, the gun should average close to these velocities with the same number of pump strokes. However, as you’ll see, it didn’t.

What is it?
The rifle is a stylistic black rifle (based on the M16 platform). It’s stylistic because no black rifle has a hole in the forearm like this one. And the barrel leaves the upper handguard differently than an M16 barrel. And the sights are different. And so on. But the object is to appeal to those who like the black rifle look, and I think they did that.

This is a multi-pump pneumatic rifle that shoots lead pellets in a single-shot mode or steel BBs from a reservoir as a repeater. In that respect, it has much in common with a Daisy 880. The steel barrel is rifled, and the rifle operates with anywhere from 2 to 10 pumps. The advertised top velocity is 675 f.p.s. with steel BBs, but I’ll check that for you, of course. Before anyone asks me — yes, I’ll test this rifle with .177 round lead balls! The bore is large enough that there’s no danger of jamming, so why not?

The rifle
The rifle has a lot of plastic on the outside, as you would expect in this price range, but the barrel’s sheathed in a rolled sheet steel jacket. The underlever for pumping is the reason the hole’s in the forearm.

The underlever is held in place by a spring-loaded detent. It’s tight against the rifle until you really pull down like you mean it.

The hole in the forearm is the handle for the underlever. Pull down hard to release it.

The butt appears to be adjustable, but it isn’t. It’s a one-piece molded plastic part. And the buttplate is solid with no trap doors for storage.

The sights are both fiberoptic, and they appear to be pretty bright. The rear sight adjusts for both windage and elevation. Though this came as a combo with a scope included, these sights are nice enough that I will first test them before I mount the scope. 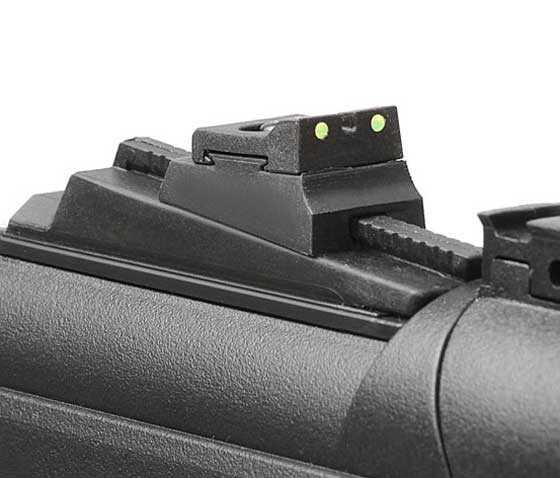 The rear sight slides up the ramp for elevation. A spring-loaded button that can’t be seen here locks it in place. The notch is held on by a screw and slides from side to side when it’s loosened. 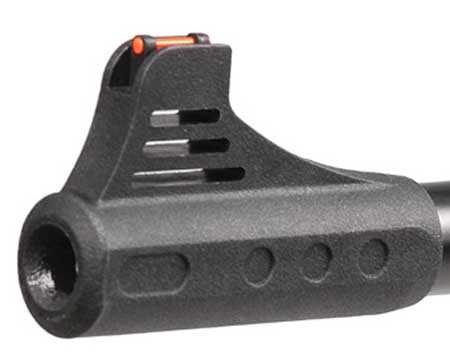 The front sight is a fiberoptic bead on a tall ramp.

This rifle weighs 4.41 lbs. The overall length is 39.37 inchesm and the length of pull is close enough to 14.5 inches that I’ll call it that. So, it’s a lightweight rifle that still fits an adult. In fact, young shooters may find the buttstock a bit too long. Since it’s hollow plastic, there’s no easy way to shorten it.

This rifle has a bolt action. The bolt handle, which withdraws the bolt for loading and also cocks the rifle, is located on the right side of the receiver. That’s the only thing on the gun that’s not entirely ambidextrous. The bolt features a cover that slides with it to close the loading trough to dirt. 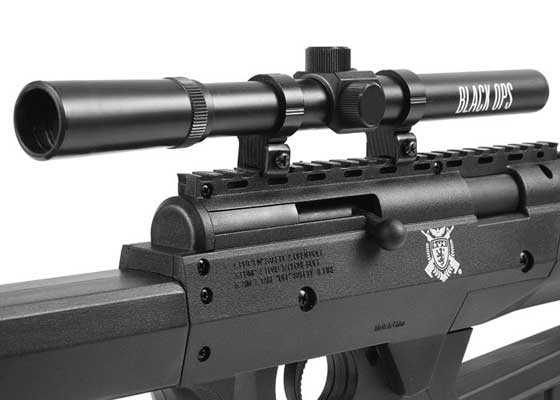 The bolt handle is on the right side of the receiver. The bolt has a sliding cover to keep the action clean! read more