The Haenel 311 is the world’s only bolt-action spring-piston 10-meter target rifle.

At the Roanoke Airgun Expo several weeks ago, I saw a Haenel 311 target rifle on one of the tables, which it reminded me that I’d promised myself long ago to give you a full report on this curious air rifle. Today, I’ll begin to fulfill that promise.

Back in the days when Edith and I published The Airgun Letter, we were contacted by a pawn shop that was importing target airguns from the former East Germany. We told our readers about them, and thousands of model 310s and 311s and a few 312 sidelevers were sold over the course of a few years. The prices were quite low. As I recall, the 310s went for $49, and the 311s brought $59. I bought several guns to test and as gifts, and the 311 you’ll see here is one of those purchased.

The 311 is unlike any other air rifle in the world. It’s a .177-caliber pellet rifle that uses an articulated bolt action to cock a spring that powers the piston. It appears similar to the Haenel 310 action except the 310 shoots only round lead balls fed from a magazine, while the 311 shoots standard diabolo pellets fed one at a time though a loading tap. The two guns are very different, except for their cocking levers. 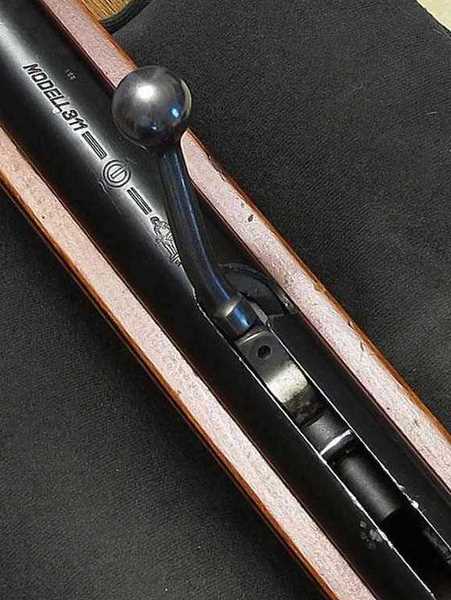 Here the cocking bolt/lever has been lifted out of its stored position and is ready to be pulled back to cock the gun.

The rifle is sized for an adult, with an overall length of 43-7/8 inches and a weight of 7 lbs., 14 ozs. These numbers come from my rifle and do not agree with the information in the Blue Book of Airguns.

The stock is blocky and looks like it was fashioned from a two-by-six piece of lumber. The wood is tightly grained and may be beech, though I’m not certain. It’s stained with a thin orange color that does not penetrate the wood to any depth. The finish is a thin shellac that’s very prone to chipping and wear.

The pistol grip is hand-checkered with large diamonds in a very crude pattern. The work looks like it was done by a prisoner wielding a not-too-sharp jackknife. There’s no checkering on the forearm, but both sides have a long European-style finger groove. 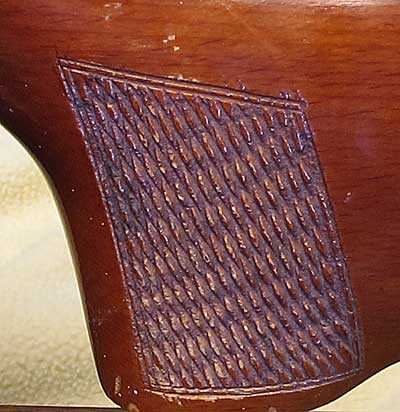 The checkering is clearly hand-cut, and a rough job at that. Overruns and missed diamonds abound.

The metal is very well polished and finished with an even hot blue. You must appreciate that Haenel has a reputation as a fine arms maker, and this rifle is so out of line with most of what they made that it looks like a government job for sure. The rifle began production in 1964, which was at the height of the Cold War, so that assessment is probably right on the money. Production ended in the early 1990s.

The 311 is a 10-meter target rifle, but it is so different from any other 10-meter rifle that it’s very difficult to categorize. The cocking effort is very difficult — owing to the short cocking lever — so this is not a three-position rifle in anyone’s book. It’s meant for offhand shooting, alone. Even then, the shooter must take care where he points the muzzle while he struggles with the cocking lever. It takes 33 lbs. of force to cock my 311, and applying it through the 3-inch bolt handle isn’t easy. In the offhand position, I would shoulder the rifle and simply pull the handle back, using my shoulder to hold the rifle in place. It sounds easy, but after a couple shots you start feeling the strain.

Sights
The 311’s sights are very interesting. The rear adjustable aperture sight looks very similar to a Walther target sight of the same era. Though it’s designed for inexpensive production, you can see that the designers managed to make it quite precise. It has the swept-back look of the 1930s.

The adjustable rear aperture sight looks like something from a 1930s sci-fi movie. The design is simple but very similar to what Walther was making at the time.

As austere as this sight is, it still contains diopters (peep holes) of different sizes to accommodate different lighting conditions. That’s an advanced feature that you don’t expect to find on such a crudely finished rifle. And it doesn’t end there.

The 311 also has the provision for mounting an intermediate adjustable sporting sight on a base located at the end of the compression tube, just behind the loading tap. Most 311 owners have never seen this sight, but I was able to obtain one with my rifle, so I can show it to you now. This sight must relate to some sporting event the East Germans had for this rifle. The Falke rifle also had provisions for two different types of rear sights, so there must have been a good reason for them. I do know that many zimmerstutzens come with this same provision, and there’s a separate sporting match for the zimmerstutzen. It’s not too difficult to imagine that there was the same kind of match for air rifles that are equipped this way. 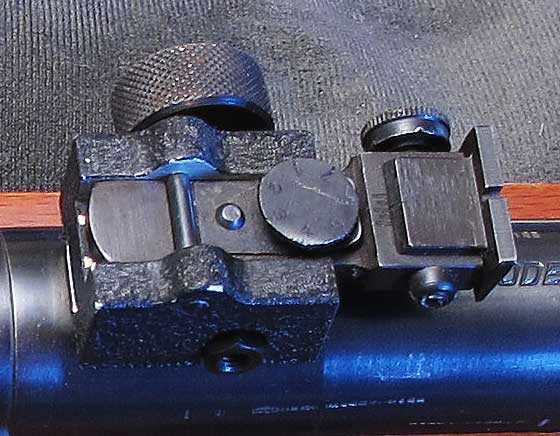 This adjustable sporter rear sight is an accessory few 311 owners have ever seen. It mounts behind the loading tap and is undoubtedly used in different matches than the target sight.

The front sight is a globe mounted on a tall stalk. It accepts different sight inserts, which would be necessary if the sporting rear sight were to be used. My rifle came with an aperture in the front sight. 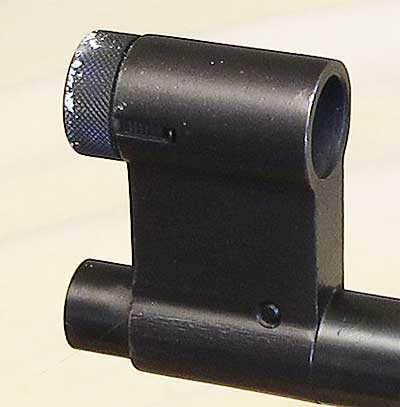 The front sight is a globe with replaceable inserts that sits on a tall stalk.

Loading tap
The 311 loads through a rotating loading tap. That is a strange feature on a target rifle, because the shooter cannot insert the pellet directly into the rifling. The tap is entirely manual and separate from the cocking function, so it can be operated at any time. 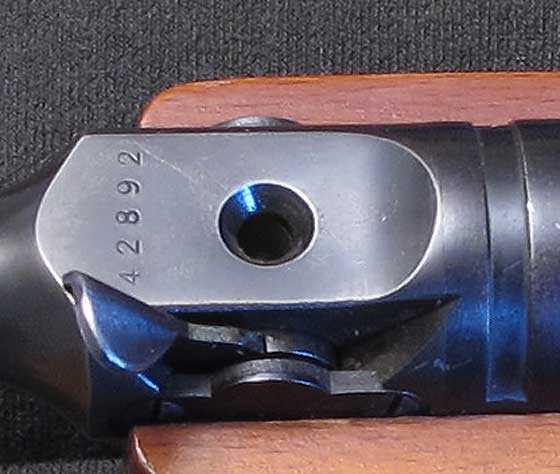 The loading tap is manual and not connected to cocking the gun in any way.

One thing about a loading tap is that it requires a different procedure for oiling the piston seal. I put 5-10 drops of silicone chamber oil into the tap, then close it and stand the rifle on its butt for at least an hour. The reason I used 5-10 drops is in case the piston seal is made of leather. I use silicone chamber oil in case it’s synthetic. Talk about covering all the bases!

Trigger
The trigger is one place where the Haenel pedigree shines through. It’s a multi-lever unit that breaks cleanly if not crisply. It’s every bit as nice as the trigger on the Bronco.

Here’s a warning to all you would-be tuners. Years ago, I wanted to quiet the vibration of my 311 action, so I started what I thought would be a simple disassembly. When I got inside the trigger, however, the job proved to be anything but simple. I assembled the gun with the automatic safety out of whack and have lived with it ever since. The 311 is not the rifle to take apart unless you have a lot of patience and perhaps a spare rifle to look at when it’s time to put it back together.

As for power and accuracy — well, this is only Part 1. I’ll test this rifle completely in the established pattern, so you’ll get answers to both questions.