Today we look at the groups made by the four pellets used in this test at 25 yards when the velocity is diminished. Part 4 covered the velocity for each pellet, so go there to see where each one is.

If you like nice linear results, prepare to be disappointed. Today’s target do show changes, but they may not be in the direction you expect. Let’s get right to it.

First up were the 7.1-grain Beeman Devastator pellets. These pellets have been a real surprise in this test, because they have proven to be accurate at supersonic velocity and they are not sensitive to bore conditioning. Shoot one and it tends to go to the same place every time. They also do not show any first-shot tendencies that so many other pellets do. This is a real plus for hunters, who are always shooting the first shot. I will have to return to this pellet sometime soon and test it in other guns, because it seems to be a real winner.

Another fine 10-shot group of Beeman Devastators at 25 yards. It measures 0.616-inches between centers.

This group measured 0.615-inches between centers, compared to the first group in Part 3 that measured 0.743-inches. Obviously the slower pellet is significantly better, but because we only have two groups to compare it is impossible to know whether one will always be better than the other. The Devastator is still going out the muzzle at supersonic speed, even though it has been slowed by about 70 f.p.s. This is the second-best pellet of this test, just as it was in the first test.

All the shooting conditions are exactly as reported in Part 3. The scope level was used for every shot and the rifle was held in the artillery hold, with the stock resting on my hand at the same place every time. So the same care is being taken each time I shoot, and that won’t change.

Next I tried the 7.9-grain Crosman Premier lites. The bore was conditioned with four shots before shooting the group shown here, and as before, the Premiers did show some wandering in the first three shots. After that, they seemed to settle down, though as you will see, settling is a relative term.

Crosman Premier lites turned in the second-worst group of this test. Ten went into this group that measures 0.754-inches between centers.

This time the group size remained nearly the same, at 0.754-inches. The group shot when the gun was shooting them faster measured 0.778-inches, which is too close to call. Yes, the group fired with the pellet going slower is a trifle smaller, but it is really too close to say there is a difference that’s due to the velocity — especially given the built-in error in measuring groups that I have talked about.

The third pellet I tried was the heavier Beeman Kodiak. They turned in the best group of the test, just as they did the first time. And the ten-shot group measured 0.628-inches between centers, which is very close to the 0.633-inches of the first test.

Ten Beeman Kodiaks went into this group measuring 0.628-inches. It’s very close to what the rifle did in the first test.

I cannot say that the Kodiaks did any better this time than they did in the first test. Even though the velocity was slowed by 55 f.p.s., it doesn’t seem to make much difference at 25 yards. Maybe that’s just not enough of a drop to matter.

The last pellet tested was the 16.1-grain Eun Jin dome. These pellets were never in the transonic region, even with no transfer port limiter in the gun. So this time they were just going slower. And what a difference that made! 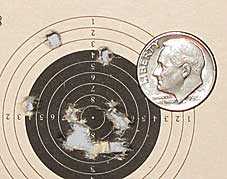 Ten Eun Jin pellets were all over the place at 25 yards. They made this huge group that measures 1.118-inches between the centers of the two pellets farthest apart. This is the worst group of this test and also much worse than the first test with this same pellet, when they grouped 0.798-inches.

Eun Jins made a bad showing at 25 yards with the transfer port limiter installed. As long and heavy as they are, I guess they need all the velocity they can get, to obtain the rotational speed required for stabilization.

What have we learned?
The first thing we learned is this probably was not enough of a velocity drop to matter, except for the slowest pellet. The next thing we learned is that the changes are not always linear. Although three of the pellets exhibit what I would call a linear relationship of accuracy to velocity, only one of them — the Beeman Devastator — shows any real improvement. And even that is just a very small improvement that could just be due to chance.

The next thing we learned is that some pellets need their speed to maintain accuracy. The big heavy Eun Jins do not like this lower velocity, and I will predict they are going to get even worse with the next velocity decrease.

The Crosman Premiers are still not performing well, and since they are still within the transonic region, there is good reason for that. I look for an improvement in the next test.

What all this tells us is that using very long heavy pellets in a lower-powered airgun is probably not a good idea. When the distance to the target increases beyond about 30 feet, you will start seeing these pellets spread out, where lighter pellets will probably continue to be accurate.