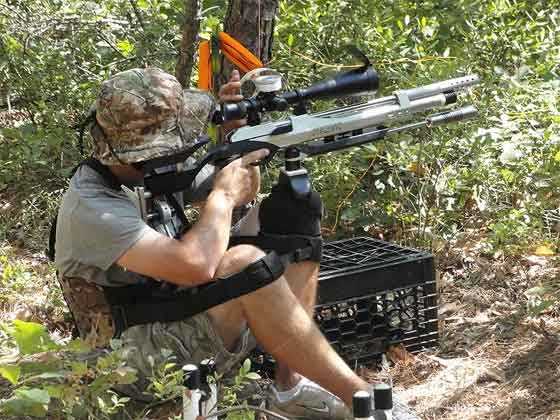 Stevin Cran shoots at a field target match. Edith has asked Pyramyd air’s facebook contact to find out the specifics about the scope as well as the specific Steyr model.

We had this question last week. Three years ago, I wouldn’t have thought of writing it, but then I learned the truth — not everyone understands what the term repeater means. Not even everybody in the gun trade understands it!

This is why I rant about using the correct terms for things like cartridges and bullets. Because if we don’t, along comes someone who thinks bullets and cartridges are the same. So, then, what do they call a bullet? Why, a bullet tip or a bullet head or a bullet nose — as one airgun maker did several years ago. I’ve seen people on TV gun reality shows refer to cartridges as bullets — so you know the practice is widespread.

And it was three years ago when I saw on an airgun retail website a description of a certain airsoft long gun that described it as a bolt-action, single-shot with a 25-round magazine! This was a dealer, mind you! I was flabbergasted until I researched it a bit more and found that many sites were making the same mistake. Apparently, there are lots of people who believe that for something to be a repeater, it must fire every time the trigger is pulled. Anything else is a single-shot, I guess.

And experiments with repeating firearms go way back in history. There were matchlock guns that used charges in tandem; firing one, then the next one behind it and so on, until all charges in the barrel were fired. The photo below is of a flintlock that has to pre-date 1830, and we know that Bartolomeo Girardoni’s son was killed as he fired one of his father’s repeaters when it exploded and tore of his arm Shortly thereafter, Girardoni turned to airguns and developed his 22-shot repeater (known as the model 1780) for the Austrian Army.

The charges for this flintlock repeater were loaded one on top of the other in a single barrel. The forward lock was fired first, then the one behind it and so on. Heaven help them if they got out of order! They relied on the bullet to stop the gunpowder from burning backward and setting off the other charges. Very dangerous! Photo from “Guns and Rifles of the World,” by Howard L. Blackmore, copyright 1965.

There were several repeaters used during the American Civil War. The most popular was Colt’s repeating revolver — a 6-shot revolver that was popular with both sides. And there were numerous other revolvers, plus a couple of lever-action repeaters from Spencer and Henry.

But when the armies of the world started buying and designing their own repeaters in the 1870s, they made most of them single-shots, as well.

These early military bolt-action repeaters had a lever or switch called a magazine cutoff that prevented the cartridges in the magazine from feeding through the action. The rifles were supposed to function as single-shots in battle until the order was given to throw the switch and turn them into true repeaters. Then they fed cartridges from the magazine until the last cartridge was fired. The brass theorized that this would conserve ammunition. I don’t know what the soldiers thought, but I know what I would have done had I been in their position.

Think this went out of style in the 20th century? Hardly! The U.S. Rifle, Model 1903A3, which entered production in late 1941, still had a magazine cutoff. But long before the soldiers had learned to flip it up to feed from the magazine. 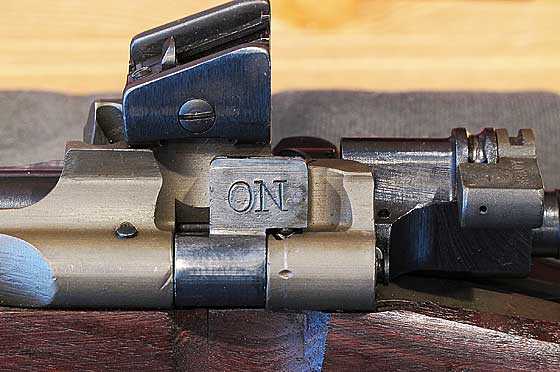 The magazine function is turned ON with the cutoff switch in this position. The rifle now feeds all cartridges as it should.

There was one stylistic reason for retaining the magazine cutoff. The bolt was opened during the drill maneuver known as inspection arm; if the cutoff was set, the bolt never cleared the magazine follower. Therefore, the bolt could rapidly be closed again without pushing down on the follower. That looks and sounds sharp if everybody’s in cadence. Of course, other models of bolt-action rifles solved this same problem by simply grinding a bevel on the back of the follower; so the value of keeping the cutoff is small. Knowing the hidebound U.S. Army, it’s a safe bet they kept it for that reason, alone!

So, what is a repeater?
A repeating gun or airgun is a gun that can be fired more than one time without loading ammunition. And when I say loading, I mean handling ammunition with the hands. So, is a revolver a repeater? You betcha! How about a double-barreled gun? Yes, again. But here we will start an argument, because some double-barrel fans think that repeaters must have mechanisms to manipulate the ammunition. They see double-barreled guns as different because they need no ammunition manipulation mechanism and are shorter and lighter than those guns that have them.

I fall on the side that believes double-barreled guns are repeaters; by the same token, 24-shot volley guns are repeaters. And large revolving cannons (where either the barrels revolve or there’s a huge cylinder containing the cartridges) are also repeaters. In my mind, the Mossberg Brownie pistol is also a repeater, and it’s a four-barreled handgun. The only thing that moves is the firing pin. The same can be said for certain models of double-barreled shotguns.

But the bolt-action rifle that has a magazine is always a repeater. The fact that the bolt must be operated to move the next cartridge from the magazine into the barrel’s breech does not prevent it from being a repeater.

What about a gun that must be loaded singly, but which carries a reserve of cartridges onboard? One example of this would be the Liberator pistol from World War II. It was a primitive weapon that fired as a single-shot but carried extra cartridges inside the hollow butt. In this case, since each cartridge has to be singly loaded into the breech, it’s a single-shot. The quantity of ammunition that comes with the gun doesn’t affect the definition. How each round gets into the breech is what drives the definition.

Think we’re done?
Not even close! As recently as one year ago, I actually had to argue that an airsoft M1911A1 pistol that required the slide to be withdrawn for every shot was a repeater! The other party wanted to call it a single-shot that had a 20-round magazine. It had a spring-piston powerplant, and pulling the slide back cocked the mainspring that drove the piston. It this respect, it’s something like a bolt-action rifle, except the piston is being retracted and the mainspring cocked instead of just the firing pin retracted and its spring cocked while the next round is fed into the chamber. The other party insisted that since this pistol did not feed the plastic BB into a chamber, that was the proof that it was a single-shot. But when I pointed out that the Walther PPK/S BB pistol shoots BBs straight from the top of the magazine and not from the chamber of the barrel, they conceded the point.

Does it matter?
What should it matter whether people know the definition of a repeater? Well, the context is what determines whether it matters. If the news anchor mentions it in a report on television, we’re lucky if they just differentiate between airsoft and firearms (or toy guns and real guns, to use their terminology). They want to call them all weapons, anyway. But for airgunners who are serious about pursuing this hobby, we really should know the fundamental definitions such as this one.